Love Beats everywhere were wondering where their favourite band had gone; as LC9 hadn’t come back to the music scene in about 18 months. Regretfully, now they know as Naega Network, the company who managed the six rookies, announced they have officially disbanded.

Reaching out to the fans through the LC9 cafe, the agency delivered the news on January 23rd with information that the contract that was held by the group has since expired. In late December, just before Christmas, LC9 decided to not renew the contract with Naega and went their separate ways instead. 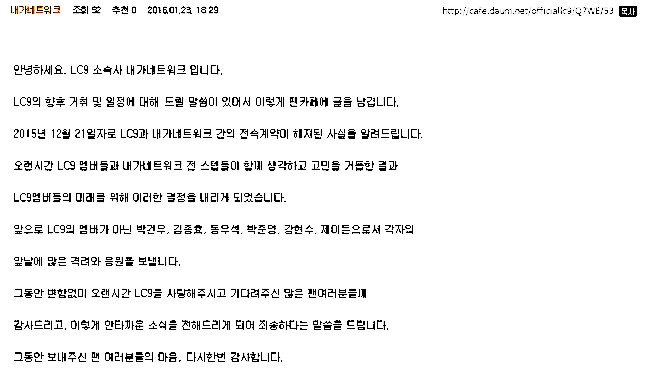 This is LC9’s agency Nega Network. We have something to say regarding LC9’s future plans and schedule, and hence uploaded this message on the fan café board. It was revealed on 21st December, 2015 that LC9 and Nega Network’s exclusive contract has come to an end. All the staff at Nega Network and the LC9 members have thought through this together for a long time and after much consideration, it is for the LC9 members’ sake that this decision was made. We would like to give our regards to each of the members who are no longer a part of LC9: Park Geon Wu, Kim Jong Hyo, Dong Yu Seok, Park Jun Yeong, Kang Hyun Su, Jaedyn, and we wish them all the best for the their future endeavors. To the fans who have been supporting and waiting for LC9 for such a long time, we would like to thank you from the bottom of our hearts. We are very sorry to bring to you this piece of sad news. To the fans who have given LC9 their love, we would like to once again, thank you sincerely from the bottom of our hearts.”

LC9 debuted in 2013 with ‘Mama Beat’ as Rasa, J-Hyo, King, Jun, AO, and E.Den. Their one and only comeback with ‘East Of Eden’ saw the group return as four members due to Rasa enlisting and E.Den heading back to Canada to further his studies. Since then no new music had come from the group.

It’s always hard to see groups go through a disbandment, especially when the group newly debuted and then stopped being active after a year or so. Love Beats everywhere will need a moment with this news, but I know they will wish everyone to be healthy and happy. Who knows, we might see the guys pop up in other places in the industry.

Scroll for more
Tap
IMFACT Gives You A Glimpse At Their Debut With Individual Trailers For ‘Lollipop’
Win A Double Pass With The 2016 Kpop Party Giveaway Contest
Scroll
Loading Comments...