With it’s air date being a little over 2 weeks away, tvN continues to tease fans about the highly anticipated ‘Goblin.‘ The upcoming drama is the brainchild behind the creative team of ‘Descendants of The Sun‘. The teaser this time, however, comes in the form of some interesting new posters.

Releasing an astonishing five posters at once, fans get a glimpse of the various relationships between characters. In the first poster, the leading man, or should I say goblin, Gong Yoo is set up with everyone’s favorite red head from ‘Cheese In The Trap‘, Kim Go Eun. She’s traded her dog fur curls and bright orange hair to a more traditional straight black do. The second couple displayed is the amnesia ridden grim reaper, Lee Dong Wook and the beautiful Yoo In Na who’s character is more childlike. And of course, the idol-turned actor BTOB‘s Sungjae, playing a rich heir and retainer for the goblin, who looks rather lonely sitting by himself, staring off into space.

The second poster is definitely more lively displaying the hilarious bromance between Gong Yoo, Dong Wook, and Sungjae. Sungjae looks on as plates are thrown and an angered looking Dong Wook prepares to hit a shocked looking Gong Yoo.Gong Yoo and Dong Wook also got a duo photo with the same comedic flair.

The last two posters are also duos displaying the couples. A sad looking Gong Yoo and Go Eun display the fate of their characters, as Go Eun plays the goblin’s ill fated bride. In stark contrariety, Dong Wook and In Na play with some sexy  and playful vibes. The production gave hint saying “The drama posters, much like the title, show an original and refined vibe. Each of the characters overflow with distinct personalities.”

The posters definitely give an inside look at both the comedy and the drama, as well as the romance of course as fans prepare for the rapid approaching premier date. Sure to be a big hit don’t forget to watch ‘Goblin’ on December 2nd!

Check out the posters below: 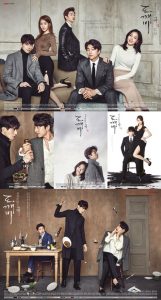