Mnet’s well known music survival show, NO.MERCY, has finally come to a climactic ending. The series, which consisted of 5 missions and 10 episodes, aired it’s last episode on Wednesday evening in Korea, and has chosen the line up. The name of the hip hop style group will be Monsta X.

The trainees, all under Starship Entertainment, competed in different missions to win a spot in the new group. The missions, varying from boasting solo talents to competing as a team, tested the trainees and forced them to perform with the utmost ability. The judges gave harsh but just feedback, finding it hard to choose in almost every situation. The judges included K.Will, SISTAR’s Hyolyn, Mad Clown, SoYou, San E, Giriboy, and a couple of others. The teasers showcased a brutal image for the show, and it definitely lived up to the hype.

Having watched this show religiously from start to finish, I feel as though it makes it easier and harder to write this article. As many of the fans of No.Mercy may know, the results of this particular survival show have cause quite a stir within the K-Pop realm.

The 12 select trainees were ranked from 1 to 12 during the first episode, 1 being the best and 12 being the worst. Every mission was a blood thirsty battle for survival. I clearly remember Kihyun and Shownu’s performance. It was supposed to be duo performance, one trainee melding together with the other but still showcasing themselves. These two trainees became so enveloped in their own selves, that the performance ended up suffering greatly. It was this type of atmosphere that was sustained around the boys.

Choking atmosphere or not, the boys all became a giant family, emotions running rampant during every single elimination. They were constantly playing jokes on each other and making everything seem like it would work out fine. In episode 8, the other members of Genius Nonchang’s Team (#Gun, Hyungwon, Shownu, and Minhyuk) pulled a prank on Yoonho, making him think they were having a fight. After having lived and because close friends with someone, the feeling of losing them must have been unbearable. The boys constantly wished that they would all debut together, a wish that would not be granted.

Each week, their performances became better as they trained together and their bonds grew. When it comes to being a group, team work is key. If even one of the members doesn’t get along with another, there will be a rift. Rifts like these do not equal good music.

Episode 7 threw in the biggest curve, so large that it changed the entire sway of events for the rest of the season. At the very end of the episode, as the elimination of Minkyun was still fresh in their hearts, K.Will brought the trainees out to eat barbeque and informed them that there were not enough rappers in the competition. Because of this, they were bringing a new trainee, a man named I.M. The boys became stiff, unable to answer their elder as he welcomed the boy into the room. K.Will took his leave and the room grew quiet. All at once, the boys seemed to vent their frustrations, practically taking it out on the newcomer. As they returned home, Minhyuk had already cleaned up and left. Jooheon, who had once stated he was most looking forward to debuting with Minhyuk, could barely contain himself as he stormed off. The drama had hit its peak, for now.

This had been a very heart breaking episode for everyone. The trainees were unable to hold back their tears as their friend was practically stolen away from them and then they had another trainee thrown in their faces. I was not the only fan who was highly upset. The boys had worked so hard to be able to claim their current spots, and I.M seemed to just waltz right in without a care in the world. His entrance condemned the future of another and they wouldn’t be able to change it no matter what happened. He had changed the entire game. In only a moment’s another’s future was taken away.

As the final episode drew closer, fans everywhere became more weary of the pending results. At this point, many were upset that the new trainee was even introduced int he first place. Many argued that Kwangji had no reason to be eliminated if only to replaced by this newcomer. There were others who believed the competition was rigged for I.M, giving him entrance to this new group while not having to compete.

The night of the final episode was highly anticipated. Our boys had one last performance to give, and one last time chance to prove their worth. The episode opened with the trainees lining up for their performances and a brief explanation into the mission was given through flash backs. They were to compete in a 3:3:3 mission. In these groups of three, the trainees will sing one song. Afterwards, they were to perform a dance routine altogether to the song of their choice.

The first to perform were Jooheon, Hyungwon, and I.M, who performed a song produced by Yella Diamond named “Interstellar.” Their cool arrangement mixed with the background music made for a splendid performance. Anyone would agree that they did Yella proud.

Wonho, Kihyun, and Seokwon did a sexy cover of Crush’s “Hug Me.” Their dancing and tone were on point, the moves and music were capable of making any woman, or man, swoon.

Jay Park’s “So Good” was performed by #Gun, Shownu, and Minhyuk. An upbeat set combined with beautiful singing and a gripping rap verse tied together into a well knit performance.

The next segment was the dance performance. All 9 remaining trainees performed to the song “No Exit” by Rhymer.

What are your feelings on the series?

Don’t forget to watch the partner series, Deokspatch. It gives a fun, behind the scenes look on the life of the trainees! The intense beat and thrilling moves seemed to fit the group’s image perfectly as they sang and danced along to the heavy beat.

Throughout the episode, there were voice overs of the trainees speaking of their excitment during the performances and wishes for their debuts. As elimination time grew near, each judge discussed their appreciation of the group and how proud they were of who they have become. Each trainee was able to say a few words, most letting it be known how proud they were and voicing their appreciation of their memories they were able to make along the way.

The selected members would be chosen by 50% fan votes and 50% judge artist votes. Fans who attended the performance voiced their opinions on who should debut as their cast their votes.

Trainees Seokwon and #Gun each gave their last words, as the new group members listened in and some shed tears for their lost friends. It was a very bitter sweet moment, one that won’t be easily forgotten. The birth of an era means the death of another as No.Mercy formed into Monsta X. The boys let their feelings off their chest as the excitement finally set in. They were finally debuting!

#Gun was and still is a highly likable trainee, one of the most favored in the entire show. Fans everywhere have been revolting, some positively and some not so much. The hashtags, #JusticeForGun and #AlwaysWithGun, has been found on both Tumblr and Twitter. Gun’s reassurance of his return was also a huge weight off the fan’s shoulder’s as they mourned his elimination. 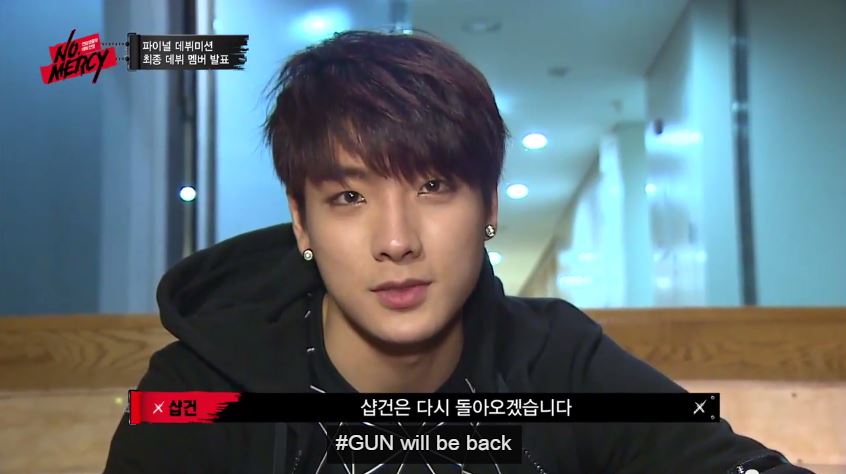 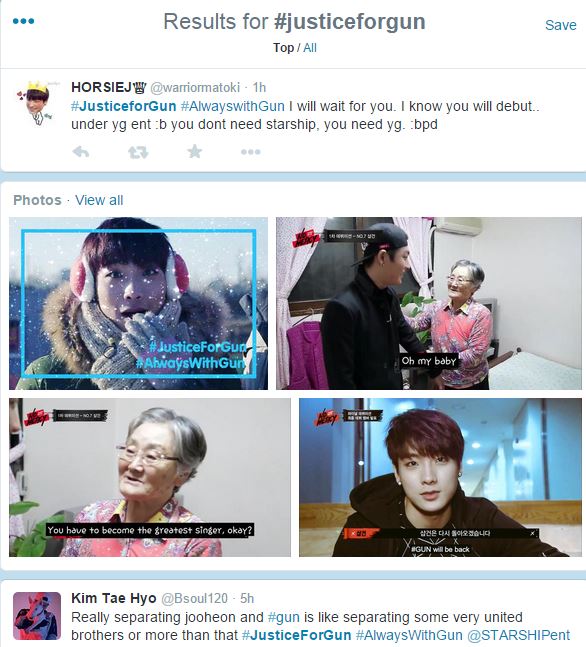 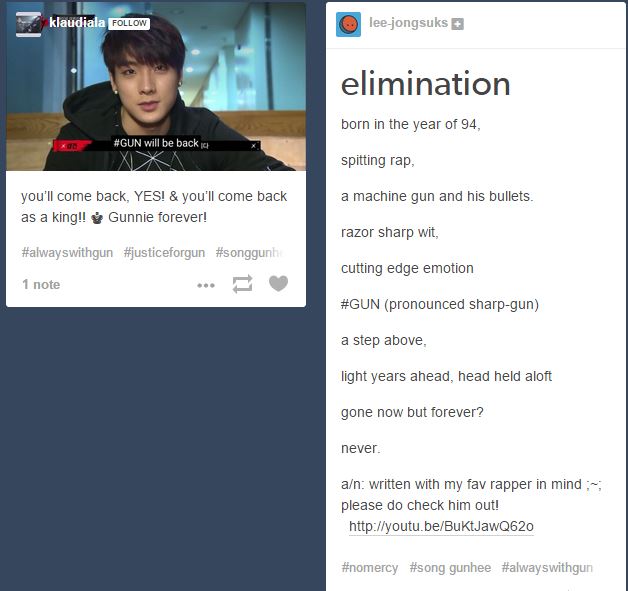 Support of the other eliminated trainees has not been lost, their named forever etched into post all over the internet in remembrance. Here’s to believing they will someday achieve the debut they deserve!

Although some of the eliminations were not entirely agreeable, Monsta X still shows crazy amazing potential. I anxiously look forward to what the boys will release in their debut album. No matter the result, please show support for the debuting members and don’t let their hard work go to waste!

The descision system was a bit dysfunctional during the course of the show, the judges more focused on individual performance than group chemistry. Even though there isn’t much one such as myself can do to change it now that it has ended, there is still the fact that is could have went by smoother. The show was a success in the end.

Support Monsta X by liking their Facebook and following their Twitter! Check out the final episode below!