Pentagon are back and they’re echoing the sentiment ‘young, wild and free’ in their latest music video! ‘Can You Feel It‘ is their comeback title this time and it’s a fast-paced track using heavy brass elements. Quite the image change from their debut with ‘Gorilla‘, the group has adopted an edgier and mature concept making us see Pentagon in a new light. 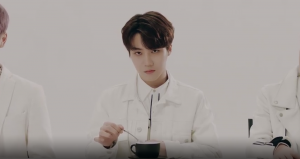 We also finally figured out where that one preppy teaser fits in with the contradicting image they portrayed in the rest of their concept photos. In one intriguing scene, the two different sides of Pentagon face off with each other at the dinner table. While the Pentagon members on the right are dressed in white, acting orderly and reserved, the side on the left are much more rebellious and seemingly try to provoke the ‘good’ side of themselves. 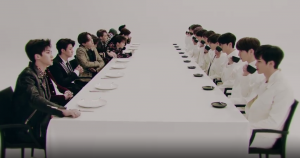 But that’s not the only wardrobe change Pentagon undergoes in the music video. They also take on a more military-like image in dress uniforms. And with that outfit upgrade, in comes a back up mob of dancing soldiers.

Most of the video showcases their sharp choreography in various settings, but the most recurring motif is the pentagon, re-enforcing exactly who this group is and what they stand for.

Personally, I liked this newer Pentagon title more than ‘Gorilla’, and I will not soon be able to forget the lyrics that was the catchiest part of the song for me: ‘I can feel it (좀 감이 오지)‘. While every member showed off their most charismatic side with both their dance and solo shots, two members that stood out for me in this video were Woo Seok and Yeo One. 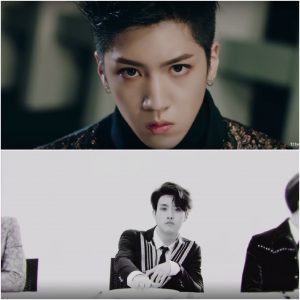 Their 2nd mini album is titled ‘Five Senses‘ and if ‘Can You Feel It’ is anything to go by, it’s an album that will surpass their debut one.

What’s best part of this music video and which member stood out to you?