Beloved actor, Ryu Joon Yeol of ‘Reply 1988’ fame has announced that he will be attending the second annual 2017 Asia Artist Awards.

A PHOTO FROM LAST YEAR’S AWARDS 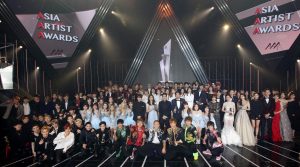 Over 7,000 fans are expected to turn up for the 2017 Asia Artist Awards, which will celebrate both musicians and actors. The ceremony will feature 20 singers and groups, as well as 20 actors and actresses.

The award show will be held at Jamsil Arena in Seoul on November 15!