DR Music broke the news through a statement posted to BP Rania‘s Facebook page on August 19.

The announcement was posted in both Korean and English, and reads:

“Dear Fans, BP Rania is finally back. First of all, we would like to say thank you for supporting us no matter what. We are deeply appreciated. Recently, there have been issues related to racism, boycotting, petition, etc on our official SNS. We have noticed that many fans have been worried because of these issues. For this digital single, we DR Music, BP Rania, staff, have been working so hard to show you what we have been preparing. About the title song, all our staff, the artists have reached to an agreement that Alexandra is no longer a member of BP Rania. We have gone through quite many conversations & meetings and agreed to promote with 5 members. This decision is not due to rumors such as racism etc. Being on stages with what kind of songs, what choreography couldn’t be decided only by the company indeed.

Thank you for your support. 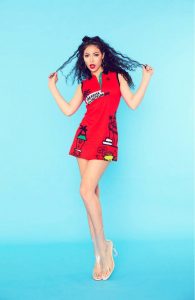 The statement has been met with shock from Alex‘s fans, as she has already been featured in teaser photos for the group’s comeback. The singer joined BP Rania in November 2015, becoming the first African American woman to be an official member of a South Korean girl group in the process.

The group originally debuted under the name RANIA in 2011 with the song ‘Dr Feel Good‘. After a tumultuous few years involving controversies and numerous member changes, RANIA was rebranded as BP Rania for their comeback in late 2016.

Officially KMusic wishes Alex nothing but the best for her future endeavours!

Follow Officially KMusic for all the latest KPop news!