Se7en and Sangchu in the Middle of a Controversy

Se7en and Sangchu in the Middle of a Controversy

SBS’ “In Depth 21” has recently revealed the actions of military PR units, based on information collected during the last two months. This has created a big scandal for celebrities who are currently serving as military PR agents.

On June 25th, “In Depth 21” broadcast footage of military PR agents after participating in a concert for soldiers on June 21st. The celebrity soldiers present at the event include Se7en, Mighty Mouth’s Sangchu, The Cross’ Kim Kyung Hyun, Rain, and KCM.

After the concert, the group of military agents gathered to eat dinner at a nearby restaurant. They were dressed out of army uniform and even engaged in drinking during the dinner. However, under Korean law, soldiers are required to wear their uniforms at all times and drinking alcohol is prohibited unless they are granted special permission.

Most of the soldiers left the restaurant at 10.00 PM that night, while two soldiers hopped into a taxi at 11:30 PM and disappeared, returning to the motel two hours later.

At 2.00 AM two different soldiers decided to leave the motel and visited a massage parlor. Their stay lasted around ten minutes, before they went to a different location and entered another massage parlor. 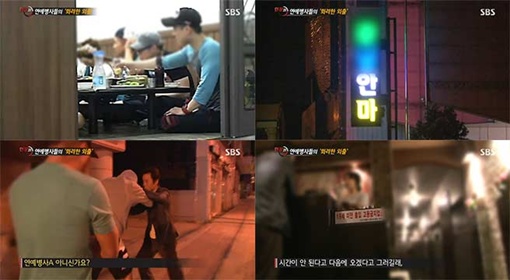 The soldiers left the building about 30 minutes later and the reporters of “In Depth 21” confronted them, asking if they went into both massage parlors. The soldiers remained silent, momentarily engaging in some physical confrontation with the filming staff.

Not receiving an answer, the filming staff asked the manager at the desk of the massage parlor, who confirmed that the two soldiers did not get massages due to timing and were refunded their money. He also stated that it was a place to receive service from women.

The Defense Media Agency stated that the soldiers went to receive massages for injuries.

Even though it was not clarified, netizens have been speculating that the two soldiers who went into the massage parlors are Se7en and Sangchu. 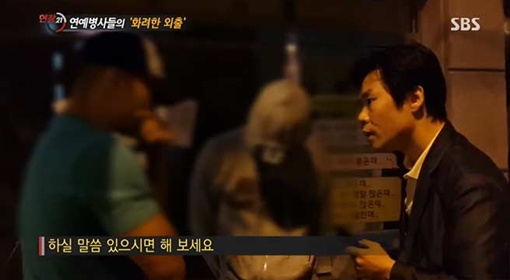 On June 26th, the Ministry of National Defense stated, “We are currently investigating the involved soldiers after being seen entering an adult entertainment establishment following the completion of a regional concert,” and added that if the issue is confirmed to be true, they will take care of the situation according to the law.

Even though the other soldiers were not seen in the massage parlor, they may also receive punishments for drinking alcohol, leaving the premises without permission, as well as possessing cell phones which are illegal for Korean soldiers.