Shinhwa Celebrates their Number One Win

Shinhwa Celebrates their Number One Win

This week, Shinhwa continued to live out their legend by winning their 2nd #1 trophy!

Taking to his group’s official Twitter, leader Eric shared, “15-year idol group Shinhwa who rose up with the king Cho Yong Pil, who released his 19th album, as runner-ups for the #1 spot! Just from this alone, we already feel honored and proud. Even with Psy hyungnim who is hot overseas~ Isn’t the music industry so exciting these days?”

“We thank and love everyone who love Shinhwa enough to gift them with their first #1 on a music show in seven years. Ps. Hyori hoobae gave us a 90 degree bow today. Pss. I am not Shinhwa Company’s administrator Eric. -Shinhwa Company’s representative Eric Mun posts.” 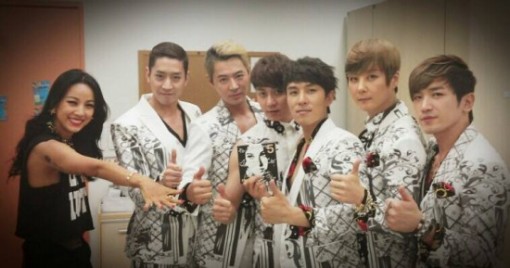 Shinhwa were all smiles, they were were not getting serious with SHINee who performed their farewell stage and reunited with their fellow veteran singer Lee Hyori backstage. On May 23rd broadcast ‘M! Countdown,‘  Shinhwa clinched another #1 trophy, showing that they truly are living legends.

Scroll for more
Tap
Go Jun Hee Feels the Age Difference Sink in on ‘We Got Married’
2PM LIVE TOUR in Seoul “What Time Is It?”
Scroll
Loading Comments...