On July 15th, Tasty twins announced on their official Weibo that they would be concluding their activities. They also stated that the decision to disband came after a long period of discussion and deliberation. 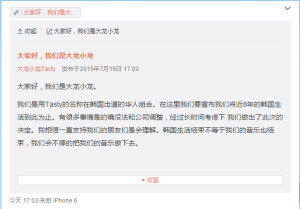 We have used the name Tasty to enter into the Korean Entertainment industry as a a group with Chinese members. Right now, we are announcing that we will be stopping our 8 year life in Korea. There has been a number of issues that we were not able to reach an agreement with our management company. After a long time of consideration, we have made this decision. I believe that the friends [fans] who has always supported us will understand us. Even though our life in Korea has concluded, but this does not mean that our music has ended. We will continue to work non-stop on our music.”

Although the Tasty twins posted this message on their official Weibo, their management label Woolim Entertainment has yet to comment.

Tasty is a duo which debuted under Woolim Entertainment in 2012 with the single ‘You Know Me (너 나 알아)‘. Both members had trained under  JYP Entertainment before debuting. Both members are well established with friends such as Jia and Fei from MissA and ZhouMi from Super Junior-M. However their popularity and social personas have yet to attract the attention of fans in Korea. Both brothers are fluent in Chinese, so hopefully in the near future we may see them make an entrance into the Chinese entertainment market.