The group, which remains without an official name, was announced through photos released on TS Entertainment‘s official SNS accounts on August 17. It will be a male idol group made up of ten members, all of whom were born after the turn of the century! Not much else is known about the group at the moment, but their agency has revealed that the ten members have an average age of just 15.9 years old!

This new group will make their debut some five years after labelmates B.A.P, although some members have been trainees for long enough that they trained alongside the B.A.P members!

TS Entertainment has also revealed that all of the members are talented performers, and the group will have vocal, rap, and performance specialists.

TS Entertainment announced the group by posting a group silhouette photo, as well as a close up photo of one of the members’ faces, which you can see below: 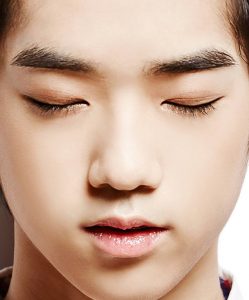 TS Entertainment has also said that although the group’s debut has only just been confirmed the agency is “actively showing interest in other countries”, suggesting that this new generation boy group will be aiming to become global stars!

Are you looking forward to a new TS Entertainment boy group? Do you think their youth will be an advantage or a disadvantage for them?

Follow Officially KMusic to keep up to date with the latest in KPop news!