Continuing to tease about their comeback, VIXX have finally revealed the track list for their upcoming album, ‘Hades‘. This will be their 6th single album and will features 3 tracks and an 1 instrumental version. The titles are, ‘Fantasy‘, ‘Love Me Do‘, ‘Butterfly Effect‘ and the instrumental version of ‘Fantasy‘. 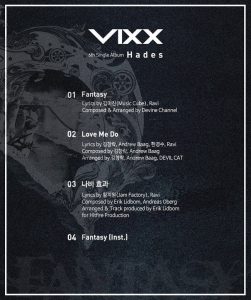 As the album title, ‘Hades‘ suggests, its clear that the boys have adopted a dark and fantasy like concept. With this concept, it doesn’t surprise the fans, the title of some of the songs. However, since fans don’t have a clue on how each song may sounds, it definitely builds up excitement and curiosity for the fans.

VIXX‘s single album, ‘Hades‘ and music video for ‘Fantasy‘ will be released on the 12th of August. So stay tuned for more information on their comeback.