Who Will Be the Next Korean Female Singer to Tour North America?

Who Will Be the Next Korean Female Singer to Tour North America?

KPop promotional company KPOPME is bringing a tour to North America, and to make the announcement, they’re playing a little game with fans!

It began a few days after the close of their three successful Got7 Canadian fanmeetings in mid-November. The company began teasing a mystery girl group tour with hints of hitting a few cities in North America while asking fans to guess who they thing it will be and who they would like to see. A few days later, they opened a number of Facebook events that included locations and even potential dates—all in late January 2017—for the tour stops, and they’ve remained active on Twitter while dropping hints through the hashtag #whoisnext. Hints and guesses ranged everywhere, from APink to Mamamoo to f(x) to GFriend to Red Velvet to TWICE to BlackPink.

However on December 9th, KPOPME took to Twitter to state that the announcement of the artist would be delayed, and on the 16th, they elaborated that the tour dates would be postponed by two to three months.

While this news may have frustrated fans a bit, it is admirable that KPOPME seemed to work towards the certainty that they have all details correct and everything set before final announcements are made. On the 22nd of December, they published a new series of updates that began with the first hint of a major change: 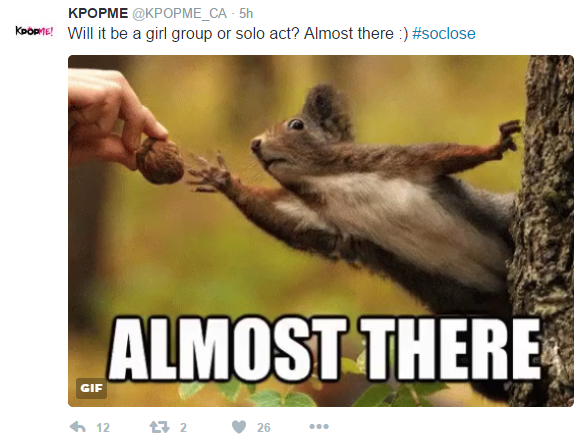 The hint sparked a small wave of supposition, but though they added one more.

Which sparked this gem.. 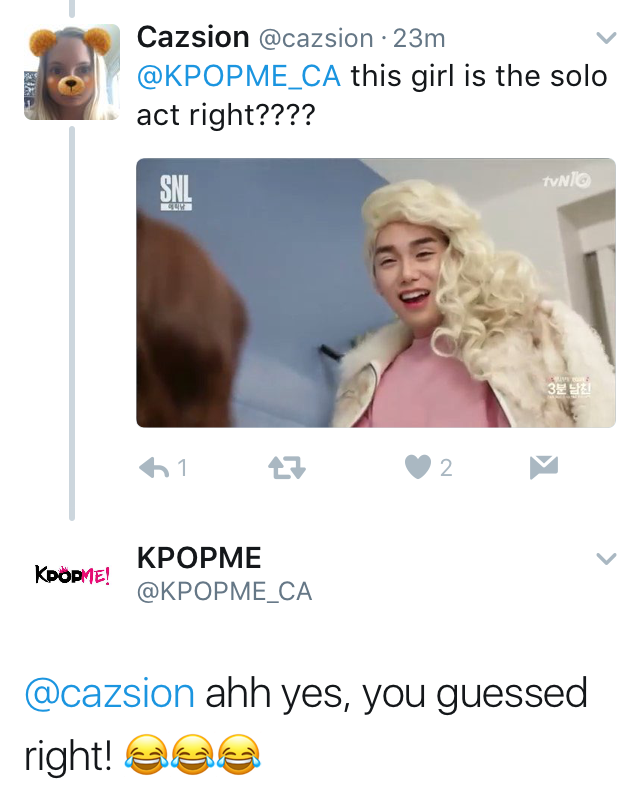 It was clear that some fans had missed the hint. So KPOPME added some clarification as well as exciting new information:

KPOPME, which is based in Toronto, Canada and has brought a number of groups including B.A.P, APink, Dynamic Duo, and Epik High primarily to Toronto and Vancouver, originally announced stops for Washington DC, New York, Chicago, Montreal, and Toronto. So who will it be and what additional cities with this solo artist be visiting? Though the artist has already been confirmed, KPOPME decided to give a little bit of relief to fans’ anxiety and narrowed down the possible choices, though they aren’t quite done with the teasing: 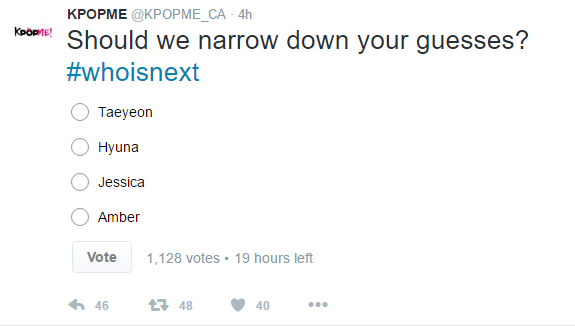 Four hours into the voting with just over a thousand votes cast and the race was tight – around 22% for Taeyeon, 24% for HyunA, 26% for Jessica, and 28% for Amber. Some fans supposed that KPOPME’s use of the word “debuted” in the past tense suggested either Jessica or HyunA, since both are no longer members of their original groups. But other fans said that Taeyeon is the only artist will a large enough solo discography, something KPOPME mentioned last month when guesses and suggestions were running rampant, and yet others said that Amber is the only one with a solid enough background in North America to hold a solo tour.

Finally, around 9PM EST that night, KPOPME dropped the most conclusive hint yet:

It is pretty certain which of the four possible artists is coming, but what are your thoughts? Share your guesses in the comments below, and keep an eye out here at Officially KMusic in the next few days for updates with the official announcement on what solo artist KPOPME will be bringing to which cities in North America!Source: SM Entertainment, YouTube,