It has lurked in the mind of every Wonder Boyz fan since we discovered that Won Yun Jun and Kim Tae Hyun began promoting under different names. It seemed as though there was hope until Kim Woo Ram, previously known as the rapper Bak Chi Gi, returned from his Instagram hiatus and released a statement. 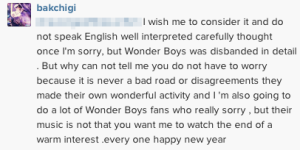 Fans across the globe have voiced their opinions on the matter, some in support and some not as nice. Fan cafes and support pages have shut down, such as fyWonderBoyz located on the famous blogging site, Tumblr.

The group debuted under ent102 in 2012 with the upbeat tune, ‘Open The Door‘. In 2013, they came back with ‘Tarzan‘, the tale of a young man locked away in his old world who was infatuated with the waitress (Girl’s Day Hyeri) who worked across from his home. The boy, played by Wonder Boyz very own K, fantasized of how he would meet her, when he stumbled upon a cassette titled ‘Tarzan‘. The video has a very unique concept and is on my recommended watch list. Check out the music video below!

Disbandment aside, I hope that we can all wish the boys well and support the member’s solo ambitions!