YG And The New Mystery Teaser

YG And The New Mystery Teaser

Oh Mr. YG you really do love to be a man of mystery and surprise.

YG Entertainment just released another cryptic “Who’s Next?” teaser , so come on fan boys and fan girls its time to guess what is going on.  Who knew part of being a K-Pop fan was also being a cryptoanalysist (code-breaker) because that is what it feels like lately.  So let’s review what we can surmise from this latest teaser: we have a female holding a box of peppero, the box says “New Unit” and “Milk Chocolate” so in short we know nothing other than the date.

I think it is a reasonable and safe guess that we may be seeing the debut of the new all-girl rookie group we’ve been hearing about for what feels like forever. If this is true, then this is the first female group from YG since 2009 when 2NE1 debuted. We also know the G Dragon has been lending his musical hand to the group , it has been said that he wrote 2 songs for them.  If that’s the case and this is about this new group “Milk Chocolate“, maybe that is their name, will have some pretty big foot steps to follow in. The rumors also say the Teddy was the main producer of the album. All of that could add up to a female hip hop group along the lines of Lip Service, and that would be pretty cool. 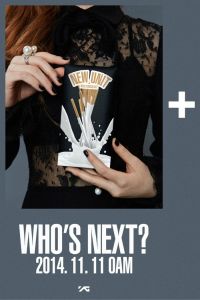 But for fun lets think of who else it could be:

Lee Hi: makes sense she has not done solo work for a while , she also featured on the latest Epik High album

Lee Hi and Park Bom: from a vocal stand point this would be unimaginably awesome. Remember the Chirstmas time single they did together? SO good.

Taeyang and Lee Hi , why this pick? Because if you are to dream I say dream big.  Imagine the adorableness of a song for peppero day with these two cutie pies.

No matter what the real answer is all we can do is wait until November the 11th to find out.  Or maybe we’ll get lucky and the next teaser will give us more information.  Probably not, this is YG, they’re really good at keeping debuts and comebacks a secret. Unlike a recent teaser where netizens had it figured out in no time, I have the sneaking suspicion this will keep us all guessing until the end.

So what do you think? Leave you thoughts, comments, conspiracy theories below. Stay with Officially KMusic for all the latest Korean music and news.