The prolific Young Bros have announced a new European Tour starting on 27th October in Istanbul and continuing through 10 European cities.  The latest guest to tour with the budding Young Djs, is none other than Ravi, famous in his own right, but also as part of the popular group VIXX.

Ravi was a contestant on Mnet’s survival show, MyDOL where he was selected to become a member of the group VIXX with which he debuted in 2012.  VIXX debuted with ‘Super Hero’ which Ravi participated in writing.  The group went on to release four video albums, four studio albums and two compilation albums featuring tracks including the fast paced ‘Voodoo Doll’ with its graphic and vivid MV to softer themed songs like ‘Shangri-La’.

Ravi debuted as a solo artist in January 2016 with his mixtape, R.EBIRTH which included collaborations with other artists including Microdot and Basick among others.  His full debut as a solo artist came one year later with the release of his first solo album R.EAL1ZE which contained a total of seven tracks all produced by Ravi himself, showcasing his skill as a producer and musician.  The title song, ‘BOMB’ starts with a strong American Hip Hop vibe that Ravi blends with a more Korean style for the choruses.  Ravi’s song ‘Nirvana’ continues in the Hip Hop style but adds a more poppy beat and the female vocals give it a lighter feel.

The stops on the tour are listed below: 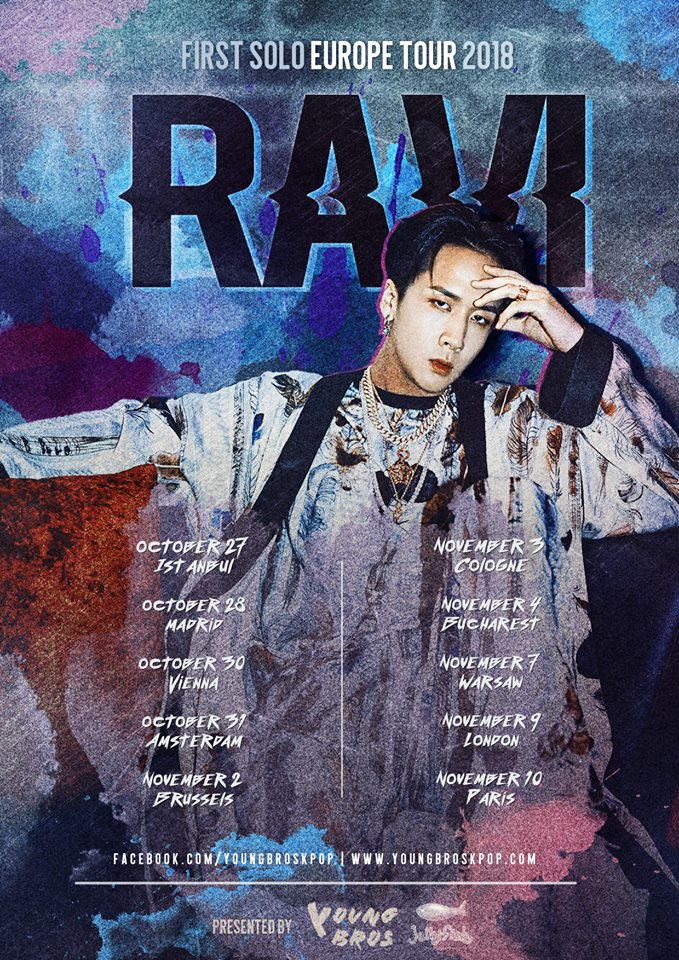 This is sure to be another amazing tour courtesy of Young Bros.  Don’t miss the chance to see Ravi live, keep watching for ticket updates as the tour gets closer.