Zo In Sung in Malaysia For Press Conference For “That Winter, The Wind Blows”

Zo In Sung in Malaysia For Press Conference For “That Winter, The Wind Blows”

Actor Zo In Sung, who played Oh Soo in, “That Winter, The Wind Blows” recently held a press conference in Malaysia for his latest drama. 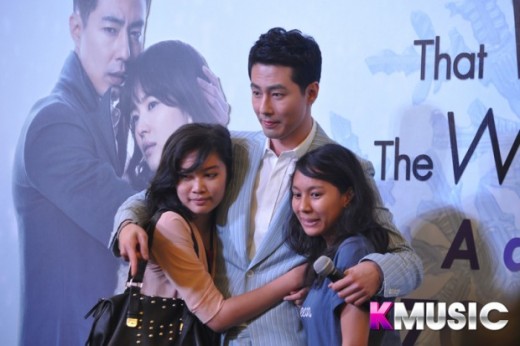 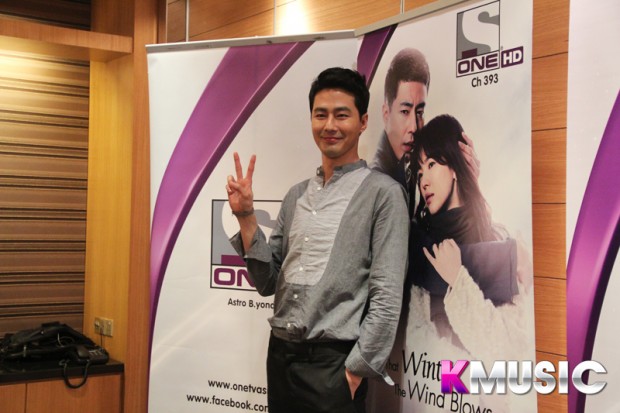 The conference was about a half hour long, with the actor being aided by a translator. But, it was still enough time to get to know the actor a little better, as well as see his comedic side while he talked about his career and latest drama.

“You came back to dramas after 8 years, what made you choose it [That Winter, The Wind Blows]?” The actor answered,

Choice of drama wasn’t the only thing on the reporters’ minds, the fashion choices also intrigued them.

“In the drama, there were various types of long coats. Which types were your favorite?” one asked. Zo In Sung chuckled, saying,

“Thanks to my parents giving me this height, in this life, I personally love to wear long coats as well. I extend gratitude to my parents.”

“Is there anything similar to your character and in your real life?” a reporter asked.

“You always act in a melodrama, do you have any plans to act in a romantic comedy or something like that?”

“I used to participate in a sitcom, “Nonstop!” for quite some time.” he replied. “I guess I was good. I wouldn’t do romantic comedy, because it is romantic comedy. I want a role where I can apply myself. ‘Can I show myself through this role?’ That is more important for me when it comes to choosing what to act in. I wouldn’t go into romantic comedy just because I want to look funny and stuff.” 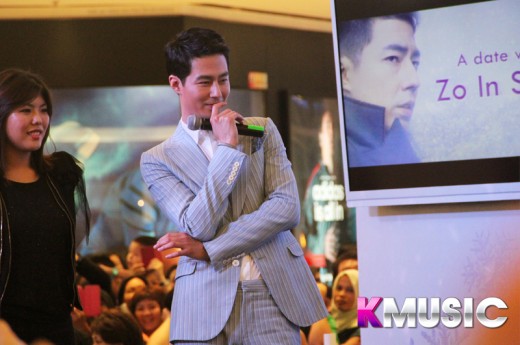 One of the reporters shyly asked, “Do you consider yourself as a romantic guy?” to which he responded,

“As you can see.” making the crowd giggle. “sorry.” he said sheepishly.

When asked if he would consider doing another film, who would he choose to act with?

“My basic instinct has always been to work with good actors, and my next project will be a big screen movie.” he explained. “I was very happy to be involved in this drama. Song Hye-Kyo is such a great actress.” he commented.

In the drama, “That Winter The Wind Blows,” we can see the actor reading and writing in braille in a few scenes. According to Zo In Sung though, he cannot read it.

“Sorry,” he sighed, greeted by a chuckle from the crowd. “I cannot read it, it is very difficult.”

“So, we know that the cotton candy scene is very popular among the audience, and several K-Pop idols tried to do it, what do you think about that?” asked another reporter.

“When we were shooting that scene, it was very embarrassing.” he said. “I didn’t expect it, but the scene came out very nicely. It was a beautiful scene. It’s very fortunate that it came out the way it did.”

“How hard is it for you to make yourself into that character, and how long did it take?”

“I didn’t really count, so I can’t really tell you how many days it took.” he continued. “I spent close to 5 months shooting this drama, and it’s not that easy to let go of that one character that you lived in for the past few months. Well, not me anyway.” 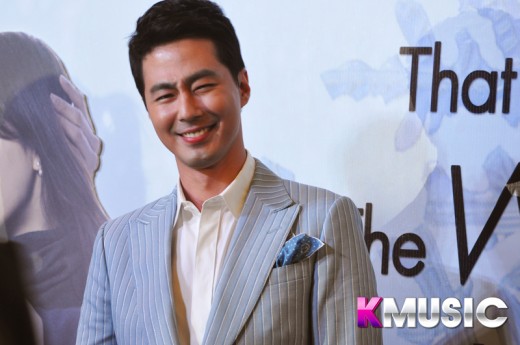 As the press conference wore on, they started gearing their questions about the drama on a personal level for the actor.

“What is your favorite scene, and which one was the hardest for you to tape?” asked another reporter.

“My favorite scene, was when Oh Soo was getting healed by Oh Young in a mansion. The toughest scene was when I tricked Oh Young. “Today is the day I forget about you.” That was the tough part about this drama.”

When asked, Zo In Sung explained that there wasn’t much research put in to becoming his character. There were however, many discussions and meeting with the creator of the original Japanese dramas, as well as with the screenwriter of the Korean version of the drama.

“What is your favorite season?”

“Why did you choose this as your comeback drama?”

“Well, after I finished my military service, I was actually preparing for a movie called, “‘Martial Arts,” but it was delayed until further notice. But I couldn’t just take any project to be in, so I took enough time to consider the next project. At that time, the screenwriter called me and asked me to be in it.” he explained.

“It is so fortunate that I am here to see you, because of this drama, and I am very happy for that.”

The actor had a good feeling about the drama, but did not expect this amount of success.

“I am not a fortune teller,” he said, when asked if  he had thought the drama would be big. “so I did not really expect this to be this big. But, I had a really good feeling about this drama, like I could really work this out, and that it was really going to be a good one. With such a wonderful script and story, I had a feeling that if I worked really hard, that maybe I could expect people to love me, love this drama, in a sense.”

When asked about fans abroad, the actor answered,

“This is my first official visit to Malaysia,” he went on, “but I have been here before when I was shooting the movie, “A Dirty Carnival,” for a commercial shooting for two days.”

When the parody of his drama by “Running Man” was brought up, the actor was asked if he would have taken part in the parody, given the chance.

“I personally think that I’ve been on a lot of entertainment shows,” he said. “Well I wasn’t physically ready after this drama. I consider it [the parody] an outstanding job, even better than me.”

Someone from the crowd had asked him, “How do you like Malaysia?”

“Well, my first impression of you, is that you have a nice backpack.” he joked. “But, I will be given a chance to actually explore Malaysia after this interview, I’m really excited. Perhaps then I can actually tell you how I feel about Malaysia. From the hotel room, I could feel warm sunshine, it was great. You all must be very happy.”

“It is scientifically proven that if you get good sunlight, you are very optimistic and healthy. [crowd laughs]”

“Have you tried any Malaysian food?” another person asked.

“Do you want to try anything special?” yet another person asked.

According to the translator, he has asked other media people what he should try in Malaysia. Someone in the audience suggested a durian.

“I will try it, and look after you if it doesn’t taste good. [crowd laughs]” he said.

“I am really lucky enough to be in this position talking to you here.” stated the actor. “I just want to be sincerely participating in my upcoming projects and continue meeting good people like you all.

“I heard a story from someone else, saying that if you don’t worry about your future much, then you can really focus more on the present. If you don’t ask to much in what you can get, you will be happier. I myself, am having a great time here.”

“What advice would you give to someone who wants to be like you?” someone asked.

“Am I really that big?” he joked. “Small actor,” he says in English. “I’m just very tall,” he explained. “There is no size for actors, big or small. Size doesn’t matter, as long as you are sincere in what you are doing when you are acting, it is really great. You are already doing good. Just keep it up and keep doing what you are doing.”

“Is there any new character you would like to challenge in the future?” a reporter asked.

“I don’t really choose a character before proceeding,” Zo In Sung said, “but when the project itself is very good, then I am more into that character. So, it doesn’t really come around like that. Because if you set the role like ‘oh, I want to try this character,’ then your choices are very limited, that’s what I think anyway.” 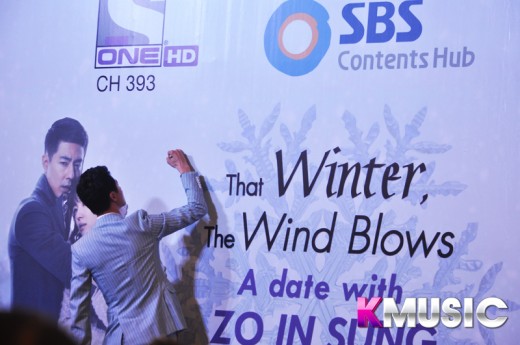 “Are there any actresses or actors you would like to work with in the future?”

“Song Joong Ki, as brothers in a good project.”

“Other than meetings, how do you get close to your fans?” one reporter asked.

“You mean in Malaysia?” the actor responded.

“Oh, because I know that there are 13 fans in Malaysia, I counted at the airport [crowd laughs]”

“Actually, no one saw him yesterday.” a person piped up from the crowd.

“You mean I am too short to be seen? [crowd laughs again]” he chided.

After that, there was only time for one more question, but they managed to sneak in two, about music.

“In the drama, there is a very beautiful soundtrack, can you sing some?” they asked, playing a few seconds of a song from the soundtrack on their phone. The actor got excited, but quickly went back to answering the question.

“Well, I am not a singer or a musician, I have a limited time to be close with fans being onstage and having a performance, so what I will do is do my best to be seen on TV with a good project.” he promised.

For the final question, one person asked, “What is your favorite song in the drama?” they awaited his answer eagerly.

With that, the press conference ended.

Credit to MyKpopHuntress for the media coverage on behalf of Officially Kmusic!