I spent most of October 4th in a Monsta X frenzy because they finally made their ‘The Clan Part 2. Guilty’ comeback. Even the previews they released were enough to anticipate an album that would surpass ‘The Clan Part 1. Lost’. Keeping true to Monsta X’s hard Hip-Hop sound, their 4th mini-album includes some familiar elements from previous albums as well as a few new sounds. This time, I.M and Jooheon teamed up to work on the album production alongside some impressive producers like Hyuk Shin and Giriboy. So let’s begin with the review of the six tracks.

The first song on the album is also their title track for this comeback. “Fighter” has an intense sound and an addictive beat. The lyrics speak of the motivation they get from a girl’s love that makes them want to keep fighting. I think that this this is a nice contrast to the hard instrumental since it juxtaposes the soft theme of love against this strong beat- or like the guys said, it’s a strong song with a soft message. One thing that really caught my attention though, was Wonho’s high notes and vocal ad-libs. When one thinks of Wonho, the first thing that comes to mind would be his visuals, however he really is proving the strength of his vocals here. Overall, ‘Fighter’ wasn’t my immediate favorite, and I would have preferred ‘Be Quiet’ as a title track, however the song has really grown on me after a few listens.

When I heard the preview to this track, I knew that it would rank high on my list of favorite songs. It’s just slightly reminiscent of ‘Trespass’ which is a nice throwback to the debut days that were not that long ago. Despite that, it’s still an EDM based track that has it’s own sound. From the start, there’s this contrast between I.M’s whisper of “Be Quiet” which is followed by the pick up of the EDM. What I like most is that the harsh beat melts into a just a background bass or snare so you can clearly hear the vocals, but resumes immediately when the rappers appear- there’s this push and pull between hyping you up and calming down which is refreshing. Once again, the backing vocals here really add to the appeal of the song, and between Hyungwon and Kihyun, I find it hard to determine who is more impressive. Of course, one the memorable parts of the track is I.M’s powerful rap which is one of my favorites on this album. The little remix towards the end of song makes me wish, once again, that this had been the title track. Considering that EDM based songs aren’t always popular, I can understand why it ultimately was not chosen.

This track starts off with “GR BOY“, so fans of KHip-Hop would have immediately recognized the musical signature of talented producer, Giriboy. As a fan myself, I can honestly say that this track has Giriboy written all over it which is one of the reasons it is my favorite off this album. I’ve also been waiting for the day he would collaborate with the group after his No Mercy appearance. “Blind” gave me a similar feeling to the one I had when I listened to Giriboy’s last album because of the balance between smooth vocals and this slower Hip Hop beat. I wouldn’t classify it as an easy-listen track but there’s a calming quality that’s present, especially during Kihyun’s parts since he has that sort of vocal quality. One of the things that had me admiring the rapper line even more was the versatility that they displayed here. Not only can they pull off their usual fast-paced rap, but they have the uncanny ability to slow it down to fit a track of this style. If I could listen to one Monsta X track on repeat forever, ‘Blind’ would be a serious contender.

Once again, the preview of this track had me earnestly anticipating the full version. It very much has that original bad boy Monsta X feeling that they debuted with, but after listening to the full track I found that I like the song much better with just the bridge and rap. Somehow the vocals don’t quite capture you the way it does in ‘Be Quiet’. Another thing I discovered was the multiple personalities that Wonho’s voice seems to hold. I don’t think I’ve stumbled across a vocalist who’s voice varies from track to track in the way that his does. And it’s one of the reasons I’ve always struggled to identify him in the more up-tempo tracks. But, with that all said and done, ‘Queen’ impressed me due to the bridge alone.

This track is, as Jooheon said, ‘White Sugar Part 2′. When I listened to ‘The Clan Part 1. Lost’, ‘White Sugar’ caught me off guard with it’s ballad feel, but I was more prepared this time. The preview only gave a taste of the non-instrumental part of the track so I was not anticipating my positive reaction to it. However, after listening the the full version, my opinion changed greatly. While some fans might dislike a ballad track suddenly appearing on a mainly Hip Hop/EDM album, I found it to be a pleasant surprise. Not only can you appreciate the vocals of all the members (yes, even IM and Jooheon!) the guitar strummed instrumental, makes this track one you just want to sway along to. The pure emotional quality of this song not only displays Jooheon’s impressive composing abilities, but also shows that Monsta X has serious ballad potential. And when finally listening to the whole track, the non-instrumental breakdown blends in quite well and doesn’t seem so strange anymore- in fact, I came to quite like it and even started clapping along!

Concluding the Monsta X Guilty trip, is this fun track. The first few seconds remind me of a carnival game I once played, which is fitting considering the title. Between the rap line and vocal line, it’s hard to choose which one is your favorite part. The song is not your typical Monsta X track, but nevertheless it’s enjoyable and light.

If I had to choose between ‘The Clan. Part 1. Lost’, and this album, this one would win since there isn’t a song I can say I outright do not like. As always, Monsta X has proven the reason that I keep coming back and that is their immense talent. From I.M and Jooheon’s participation in production, to the ever increasing quality of the vocal line, and IM’s pleasantly surprising vocal ability, the group makes me anticipate what’s in store next. I also like the way this album ended with a contrasting song fun song compared to the heart-pounding introduction with ‘Fighter’. 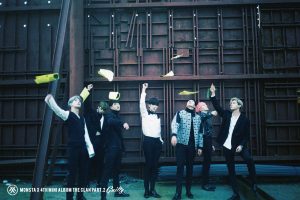 Let’s wrap up this review and look at the track standings:

Each track is scored out 10 points based on lyrics, arrangement, vocals and rap, and balance between all three.

Based on track listing I give the album 8.5/10. I do like the contrast between a strong introduction and soft ending, however the placement of “Blind” before “Queen” interrupted the hyper pace suddenly. Putting “Blind” after “Queen” is the only track re-arrangement I would have liked to be done.

That concludes the album review, do you agree with this review? Let us know in the comments below!

For all the latest K-Pop news, be sure to follow Officially KMUSIC!