The Art And Symbolism Behind BTS’s ‘Blood, Sweat, And Tears’

The Art And Symbolism Behind BTS’s ‘Blood, Sweat, And Tears’

* Have you heard about the boyband named 방탄소년단 (BTS)?

* Yeah. I love them very much, actually.

* Really? I never heard about them until yesterday. They are really popular now.

This was taken out of a conversation I had with a Korean friend of mine who doesn’t have much interest in K-pop.

I’m sure that by now, most of you (if not all), know who BTS are. Their last hit ‘Blood, Sweat & Tears (피 땀 눈물)‘ managed to break many records and the song’s music video is about to hit 44 million views. Considering it’s been barely a month since the video came out, that’s quite impressive. While BTS’s popularity was pretty high for a long time, it seems that their latest single brought them to new heights: record breaking, entries to various charts and it seems that suddenly many Korean friends of mine, who don’t have interest in K-pop, know who BTS are. What caused this sudden peek of popularity? Was it the fact that the music video had various trailers and teasers? The fact that “ARMY” (BTS’s official fan club) is constantly growing and has very dedicated fan base? While I do believe that all of this is true, I would like to point out the uniqueness of BTS’s music videos as a reason for their success. Harmony of Art & Entertainment

Most of BTS’s videos are special: It doesn’t matter if you are a hardcore fan of BTS or Film Studies student who likes interesting videos, you are most likely to be fascinated by BTS’s videos. One the one hand, their videos are full of cool dance moves, stunning visuals and high production values. On the other hand, there are also symbols, idioms, themes and mysteries that will force you to watch the videos again, do some research and make you think about what you just saw. It all depends on what kind of person you are. BTS offer a treat for everyone and this is another reason why they are so successful.

The last music video ‘Blood Sweat & Tears’ is a good example for this. In the video, we see stunning visuals with sexy and impressive dance moves that complement the song. In addition to that, there is an artistic dimension to the video as well. In the beginning, we see band member Jin, staring at a painting just before the music starts. Due to the fact that we see this painting for an extended amount of time, we can assume it is important. The painting’s name is The Fall of the Rebel Angels and it was painted in 1562. It shows us a battle between good and bad angels. The bad angles (or “fallen angels”) look like half man-half beast demons. In many ways, it symbolizes the internal battle between good & evil. The righteous and the corrupted. 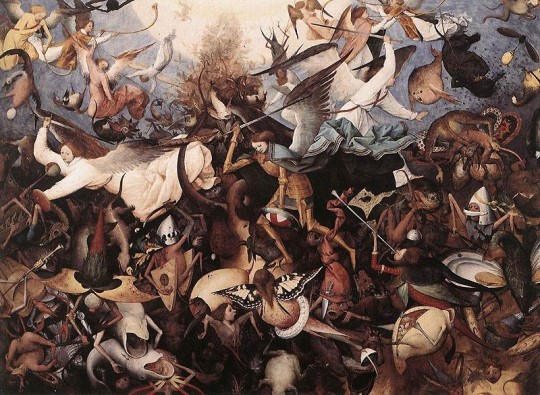 Throughout the video we see many statues and other paintings that deals with similar themes. Perhaps the most notable one is the statue with the black wings that Jin kisses in the last part of the video. Many people have different ideas for what are the messages or the meaning of all of these elements are. Some will suggest that this music video deals with maturity and all of the pain that involved in the process. While maturity may look like corruption or loss of innocence, it is something that we all must go through. This is just one theory though. The options are endless. 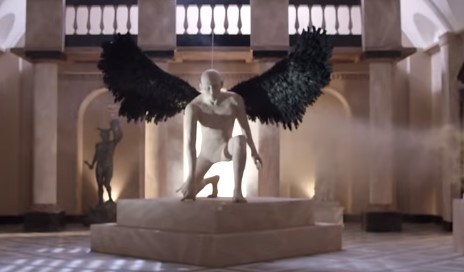 You can learn more about the “The Fall of the Rebel Angels” painting with this interactive video:

Also, check this Korean YouTube channel that offers theories on many K-Pop MVs and movies as well. English subtitles are available too.

Tradition of Being Different

This is not the first time that BTS’s music video shows us something different. In the music videos of songs like ‘I Need You’, ‘Run’, ‘Forever Young’, and ‘Fire’, we can see a lot of entertaining things that doesn’t require us to think a lot. We can just enjoy the beauty of the members, the music and the high quality of the video’s visuals. However, in order to fully understand those videos, we might need to watch them few more times. Only then we can come up with a theory that will uncover the video’s meaning. In those videos, just like in the video of ‘Blood Sweat and Tears’, different viewers can enjoy and relate to different things. 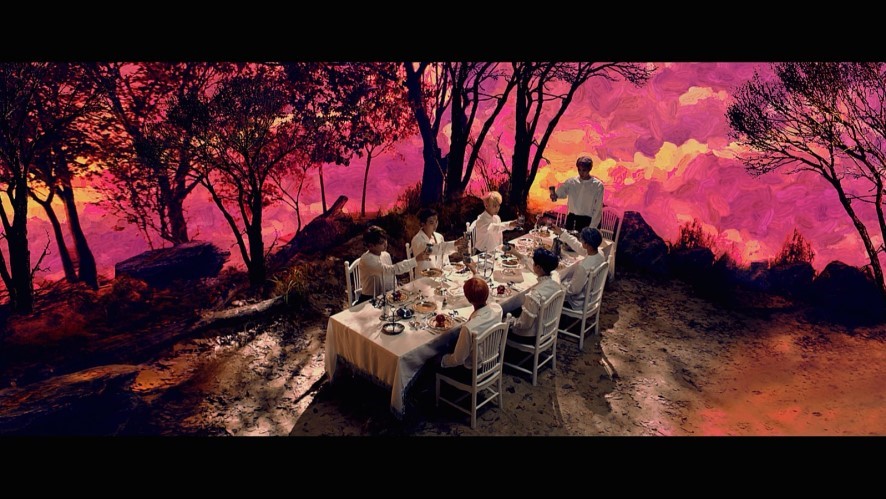 The Logo & The Opportunity

Before the beginning of each BTS’s videos, we see the logo of their company, Big Hit Entertainment. Under the company’s name we see the writing “Music and artist for healing”. This is quite unusual for an entertainment company. Let alone a company that produces K-Pop Idols. This not just a slogan that was meant to distinguish this company from others. It actually reflects the company’s approach to their products.They show artistic things in their videos. The “Healing” part may be found in the fact that BTS talk about social issues in their songs. It can be bullying, maintaining you individually despite social pressures, struggles with growing up and dealing with emotions such as heartbreak. The healing may not be a physical but emotional one.

BTS is a great band to show to people who are yet to have interest in K-Pop. Their different “color” may attract those who are not interested in other main stream bands and music videos. This is a great opportunity for K-Pop fans to create new ones. To show other people that the world of K-Pop is much more diverse than what they think. To show that K-Pop is much more than “Gangnam Style (not that there is anything wrong with this song)”. To show a world where entertainment and art can co-exist in harmony.

Stay tuned to Officially KMUSIC as we bring you the latest in K-Pop news!