There’s nothing new with sasaeng fans stalking, following K-pop idols wherever they go, and even waiting at the confines of their home. Just recently, on September 16, BIGBANG’s T.O.P expressed his distress on Instagram. He pleaded to fans to stop paying a visit to his home in Seoul, South Korea and respect his privacy.

He wrote: “To my Chinese fans… Please stop coming to my house…When I hear the doorbell ringing at night, I get scared to death. I feel my heart’s about to explode. I think I have been understanding enough but now I’ve decided that I’m going to report it all to the police.”

Even though he was scared and clearly stressed out with what happened to him, he even made a suggestion to sasaeng fans to visit Gwanghwamun (for a tourist attraction) instead and added that the place is beautiful. This effort was to try to make fans avoid his home, and with justifiable reason.

A lot of netizens left messages telling him not to worry and he should keep safe, away from the harm that may be caused by sasaeng fans. The same post also gave rise to negative comments from some Chinese fans, creating a whole new drama for everyone. His was taken out of context, and they are now threatening to leave the fandom for good.

“TOP should tolerate stalkers because he earns money.”

“Some CVIPs are calling him rude & saying he’s discriminating against all CVIPs.”

“We respect you and you should respect REAL CVIP who love you and support you. If you hate CHINA, please do not come again. May you succeed in your own country.” 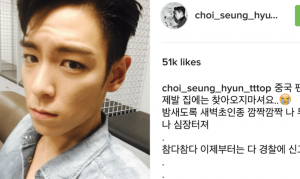 He recently removed the post from his Instagram, due to all of the negative traffic it was attracting. Sadly, he is not the only one dealing with SNS problems at the moment. Fellow band mate G-Dragon also had his Instagram the center of attention when it was recently hacked.
What are your opinions of how T.O.P addressed these fans? Let us know your opinions in the comments below!
To keep up with all the latest K-Entertainment news, follow Officially KMUSIC!

Scroll for more
Tap
BTOB-BLUE Release ‘Stand By Me’
They’re Back! Infinite Is Bloody and Badass In ‘The Eye’ MV
Scroll
Loading Comments...