With a short promotion cycle for their latest comeback, ‘I’ll Be Your Man‘, BTOB have been in preparations for their first full length album in Japan.

This album will be Christmas-themed, with their title track being a Christmas song, but will also feature additional songs such as the Japanese versions of some of their Korean title tracks. The album, called ’24/7‘, has 13 songs and promises some awesome units and solos. Among them are; the Japanese version of ‘Hello Mello‘ done by the rap unit, vocalist Changsub’s solo song entitled ‘Snow Light Road‘, and a song by the vocal unit! 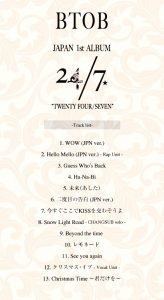 Along with the track list, BTOB also released their first teaser. Putting fans in the Christmas spirit, the teaser is for their title track ‘Christmas Time‘. It features a snippet of the song as well as some adorable visuals, as the boys decorate a Christmas tree.

BTOB have had multiple Japanese tracks, all riddled with success, and they sure aren’t lacking for their first album. The band are sure to continue to tease Melodies until the release on December 7th!

Are you excited for BTOB’s Japanese album?

Stay tuned to Officially KMusic as we bring you the latest in Korean music news!

Scroll for more
Tap
Hwarang: The Update (On Stills and More!)
Nu’est Is Bringing Us A Starlight Night!
Scroll