On the 30th of November 2014, Eric Nam once again graced the shores of Australia, by holding a concert in Brisbane at The Tivoli Theatre. The concert was an intimate affair, smaller than other concerts held in Australia and the first to occur in Brisbane. Fans were eager for the concert as some were even seen lining up at 6 in the morning!

Moelicious from K-Radio was lucky enough get to interview him before attending the event.  She had such an amazing time, she wanted to share her one of a kind experience with you! 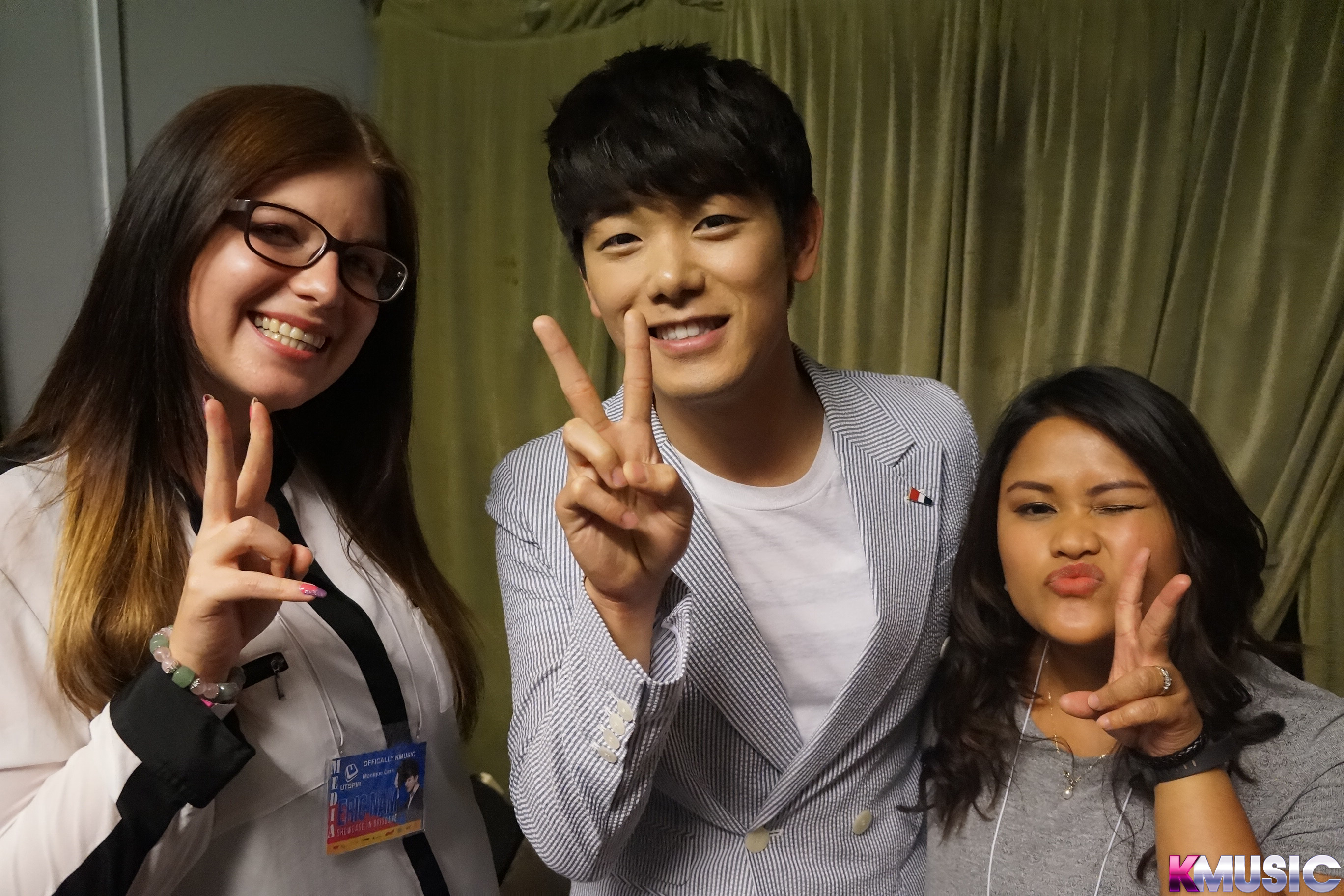 We had the lucky opportunity to interview Eric for the fourth time and I was nervous as hell. Even with preparation and practice, my nerves were getting the best of me since this was my first face to face interview with a K-Pop artist. Prior I had only had interviews over Skype which requires no video or face to face interaction. However, as soon as Eric Nam walked out, he greeted me with a big smile and welcome. My shaky hands gripped his in greeting and he smiled saying to relax and be calm. The interview then passed by in a blur. I’m not even able to remember what I had asked or what he had said. Luckily, I have a video and pictures to prove to myself that I had met and interviewed Eric Nam. The interview will be up within the next few days so you can see that it was real too!

Prior to the concert itself, some fans that had purchased VVIP tickets were able to watch Eric Nam in rehearsal. They raced to the front of the stage to get the best spot, whilst swaying in time with Eric Nam’s harmonious voice. There was no big stage production just a video montage projected on the back of the wall featuring clips from Eric’s music videos, as well as photo images and clips from After School Club, which he hosts with Kevin of U-Kiss.

After the rehearsal, fans started filling the lower level of the Tivoli and they were eager with anticipation for the show to begin. Banners, signs and cameras filled the air as they waited for Eric to appear. The lights slowly dimmed and cheers and screams rose. The first act was a group of four girls known as Pandora who performed dance covers of Sistar’s “Touch My Body” and “I Swear”. The girls performed well and had great enthusiasm. The next act was Pepero who performed “Happiness” by Red Velvet. This cover was done amazingly. The audience were involved by dancing and singing along with the group. Then they exited the stage and crowd knew what was coming. The MC riled up the crowd by getting them to shout for Eric and then he appeared.

Eric Nam is known for his melodic voice and he did not disappoint. He began his stage by singing his song ‘Love Song’. Fans were in awe and cheering loudly as he effortlessly delivered the song. With nothing else on the stage besides himself and the video projection on the back wall, there was nothing to distract fans from Eric Nam himself. Totally absorbed with just one song, fans were next treated to two of his biggest covers, Taeyang’s ‘Eyes, Nose, Lips’ and ‘Say Something’ by A Great Big World. Both of these songs were just outstanding and even had fans crying. A man who attended the concert with his partner said that though he was not interested in K-Pop at all and even he was impressed by Eric Nam and his ability to perform such highly esteemed songs with finesse and emotion. 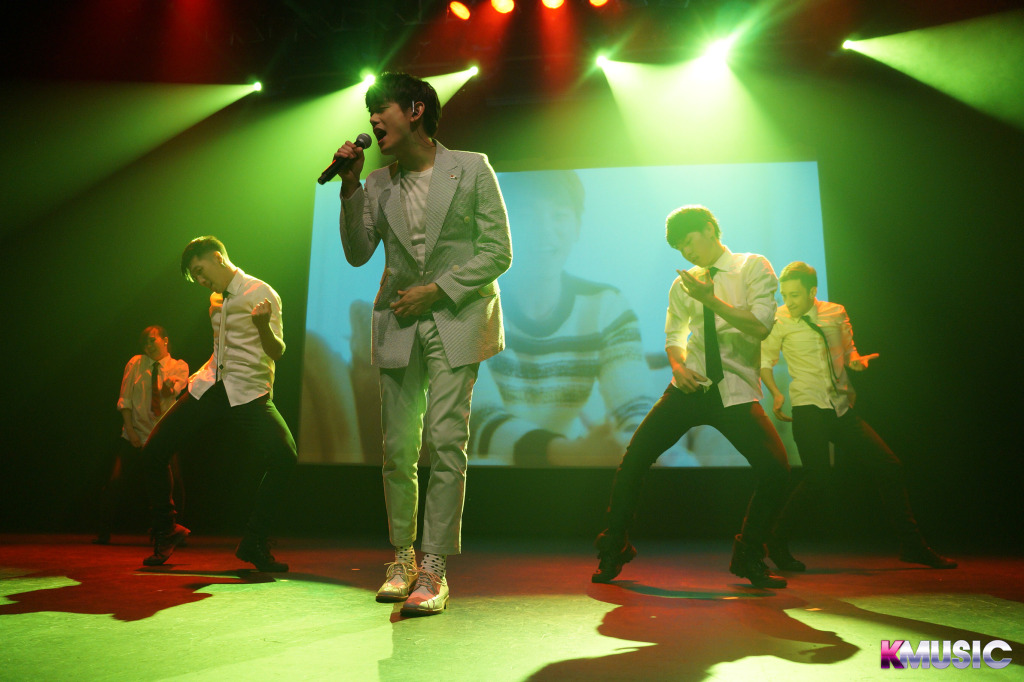 For the last song before the interval, Eric sang his own song ‘Heaven’s Door’. This time he was joined by AO Crew, a well-known dance group in Australia. They performed amazing choreography alongside Eric as he sang and engaged with fans. Eric then left the stage, saying he would be back soon after a short interval.

During half time Pandora were back with another dance cover and then a new group called Azra came onto stage and did one of the biggest songs of the year, 2NE1‘s “Come Back Home”. The group consists of four females and two males and what an amazing job they did! Each member brought something new to the table and the overall performance was powerful and energetic. The dance groups each provided something their own flavour and take on huge K-Pop hits yet staying true to the choreography.

Fans were then treated to a deliciously funny half-time special event which was hosted by Andy Trieu from SBSPopAsia. He brought four fans up on stage to perform any iconic K-Pop dance to win an Eric Nam poster. The four girls brought laughs and cheers from the crowd as they all wanted to win, but were each rewarded with a poster as a thank you for participation.

Next came, one of the funniest moments in the entire showcase “Q&A” with Andy and Eric. A board filled with post it notes was brought onto the stage with questions written by the fans during the line-up prior to the concert. These two guys had the best on stage chemistry, feeding off each other’s energy and bringing so much laughter and humour the concert. The questions given were a mix of weird, crazy and confusing. One question asked Eric to show the audience some dance moves from the song “Something” by Girl’s Day. Neither Andy or Eric really knew the moves so brought a lucky fan from the crowd onto the stage. She showed them what she knew but Eric and Andy both brought in some humour in regards to the skirt-ripping choreography and took it in the dirty minded direction which brought many laughs from the crowd and a lot of embarrassment to the young girl on stage. 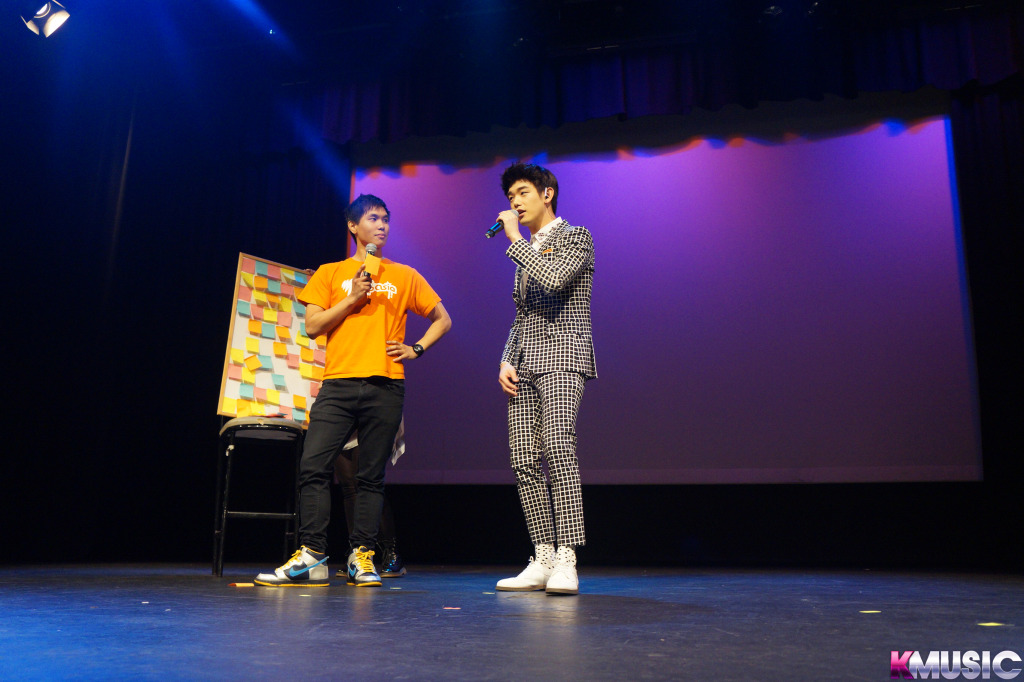 The Q&A went on for half an hour and the crowd was completely  immersed in the fun and crazy antics of Eric and Andy. It was definitely a great way to see a different side to the idol and also showcase his wonderful personality that we have seen on and off screen. This type of fan service event is something I would like to see more of in K-Pop concerts as it allows more interaction with the well-loved idols we rarely get to see.

The last segment of the concert consisted of three more songs and a “Juke Box” event. The first song he sang was John Legend’s “Ordinary People”. Though his own songs are amazing, when he sings covers of other songs it just takes everyone’s breath away. The emotion that he can deliver through each song is astounding and really showcases his natural talent. Eric was joined by a pianist by the name of Sophie who was to accompany him with the remaining songs of the show. Her skills were beautiful and the piano was the perfect instrument to match Eric and his voice.

During the “Juke Box” event Eric asked the crowd what songs they would like to hear him sing. The crowd yelled out names left, right, and centre. In the end he did Acapella versions of Boyz to Men “End of the Road”, “Marry U” by Bruno Mars, Sam Smith’s song “Stay with Me”, which he retrived the lyrics from an audience’s phone and a variation of others well known songs. He also provided us with impersonations of Michael Jackson and Britney Spears and even succumbed to the demand of doing the Giyomi song much to his embarrassment. 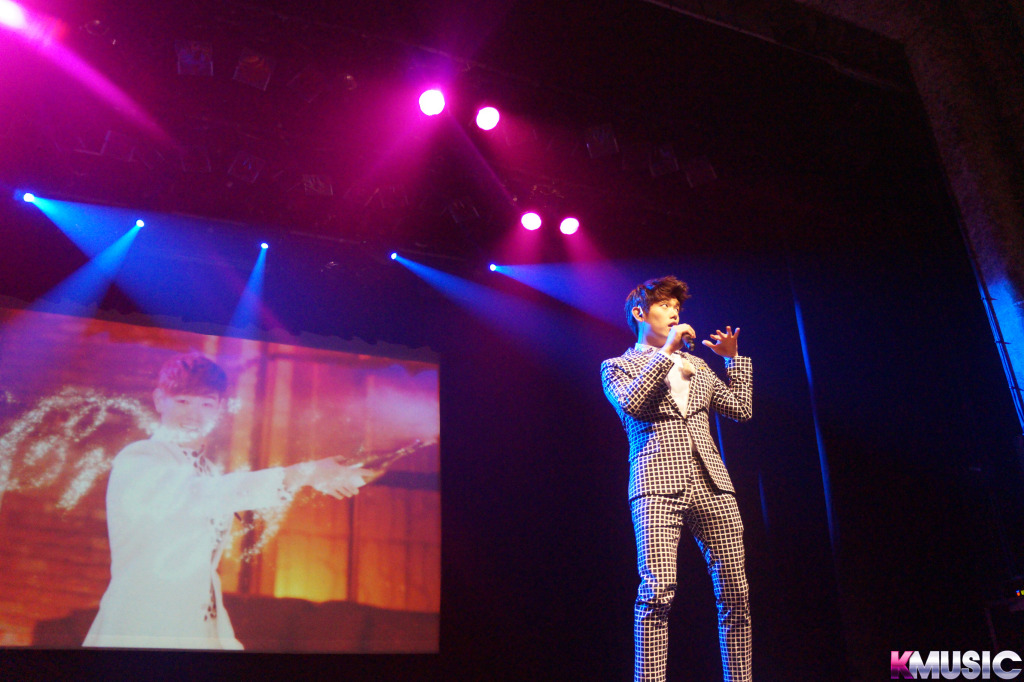 The final two songs were Ariana Grande’s “Break Free” and the single he released this year “Ooh Ooh”. Both songs were performed with ease and enthusiasm, he even gave the crowd cute dance moves during his own song “Ooh Ooh”, which the crowd just thrived off, with cheers and shouting increasing as the song went on. It then came to the end of the concert which draw sad moans and noises from the audience. Eric then decided to take some selfies with the audience. Because of his cracked screen and lack of equipment, he borrowed the phone and “selfie stick” from one lucky member of the crowd. He then proceeded to take numerous selfies with the crowd whilst squatting and hopping along the stage like a frog. Shortly after goodbyes and farewells, Eric left the stage.

The MC reappeared and began thanking the audience for being here until a chant of “Encore” began and Eric Nam once again entered the stage. He said more Thank you’s and then asked if he was allowed to perform one more song, to which he chose “Eyes, Nose, Lips” again as requested by the audience. Lights, banners, phones and signs were back up in the air and the crowd swayed and sang with Eric. With that encore song, he said goodbye once more and promised to be back, thus ending the concert and Eric’s first solo stage in Australia.

Fans gathered in a mass line where designated to begin the wait for their “Fansign” event, which left girls in tears, smiles and giggles at having to meet and talk to Eric in person. Speaking with fans after the event, none were disappointed and were bigger fans of Eric than ever, saying that he was a naturally gifted singer who needs more recognition.

An amazing night, with an amazing singer and beautiful person. Thank you Eric Nam, we look forward to seeing you back on Aussie shores once again and eager await your comeback next year!

Stay tuned for Eric Nam interview with Moelicious to be uploaded on Youtube this weekend.