EXO Chanyeol Posted About Frightening Situation On His Weibo

EXO Chanyeol Posted About Frightening Situation On His Weibo

EXO‘s Chanyeol had an intense and scary experience on his recent trip to Shanghai.  It was so disturbing, he took to his Weibo to tell his fans about it. 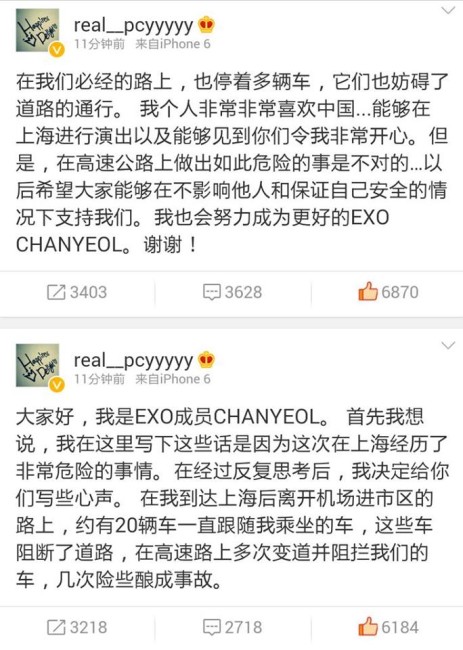 “Hello everyone. I’m EXO’s Chanyeol. Firstly, what I would like to convey is, the reason why I wrote here is because I’ve experienced something dangerous here in Shanghai. After much considerations and reflections, I’ve decided to write down my thoughts to you all. After I’ve arrived at Shanghai, left the airport and was on the city road, there were about 20 cars following after me. These cars disrupted the main road, even at the highway, frequently changing of lanes and at times tried to block/stop our car. These encounters may lead into accidents.”

“The road that we have to pass, have many cars that stopped by too. These cars have also blocked the flow of the traffic. I myself, really really like China… To be able to come to Shanghai to film and to be able to see you guys, I’m really excited. But doing such acts on the road is not right. In future, hopefully everyone can support us under circumstances like not disrupting others and taking care of your own safety. I myself too will work harder and become a better EXO CHANYEOL. Thank you!”

This is easily the scariest situation someone can experience.  There is no way to pretend that Chanyeol was unaffected by the fan behavior, he took the time to make a long post in Chinese. Too often fans seem to forget that idols are humans as well and are entitled to the basic human rights of private space, private lives and having a work and living environment free of danger.

Why do fans do such unimaginable things and expose, primary themselves in danger that honestly speaking from the situation above, can bring even death and those who we claim we love and support above anything.  Many of you will say things like “It’s not me” or “I would never do such a thing”, but do you do anything to stop it?  Do you expect your fellow fans to behave, or do you turn a blind eye and keep silent, even though silence equal consent?  This is a subject we have to discuss, it is something that we have to work to end before this behavior ends in the injury or worse, the death of someone.

Definition of a fan: “A person who is enthusiastically devoted to something or somebody.” Yes, we are allowed to love what they do on stage, buy all the albums, vote for them support them, show up in public places where we have been invited and everything else, but please know your boundaries.  The love of a fangirl or fanboy is intense but it needs to be positive for both the fan and the idol.

What do you think of this situation?  What would you do?  What can we do to stop this from happening?  Let us know in the comments!

Chanyeol was in Shanghai filming his new movie ‘So I Married My Anti-Fan’ a romantic comedy based on a Korean manhwa of the same name.

Officially KMusic brings you all the latest news from Kpop so stay tuned with us!