The movie, ‘Brother’ or ‘Hyung’ has confirmed to be released this November. The movie tells the story of the relationship between brothers, top judo competitor Go Doo Young which isplayed by EXO’s D.O., and “older brother” Go Doo Shik played by Jo Jung Suk. Doo Young suffers from an injury right before a huge competition and due to these circumstances comes to live with his older brother, Doo Shik who was previously behind bars for committing a series of crimes.

The poster shows the silhouettes of brothers Doo Young and Doo Shik. The movie is depicted as “bro comedy.” Additional big names appearing in this movie includes actress Park Shin Hye. It will be exciting to see how this pair will interact in the upcoming movie! 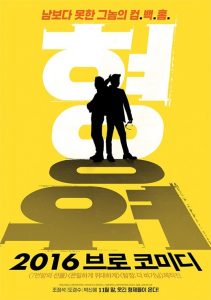 What are your thoughts on this upcoming movie? Let us know in the comments below!