Kang Ha Nuel is joining Park Seo Joon, in a new film! They’ve been cast in the upcoming movie, ‘Youth Police,‘ an action thriller in which two young policemen get involved in an abduction case when they witness a kidnapping. Ha Nuel and Seo Joon are leading the film as the two police officers. They’ll be showing off their more innocent charms as passionate rookie police officers. 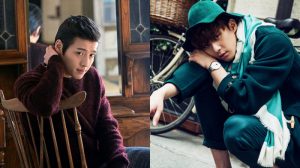 Ha Nuel is currently in the highly rated ‘Scarlet Heart: Ryeo as 8th prince Wang Wook and Park Seo Joon is starring in the much anticipated ‘Hwarang: The Beginning‘ alongside BTS‘s V‘s, Shinee‘s Minho, and a handful of incredible actors.

Be sure to follow Officially KMUSIC for all the latest K-Drama news!