In order to celebrate the achievement, the group has prepared a day jam-packed with surprises for their fans! SF9 have dubbed their anniversary ‘FANTASY TIME‘, which shows just how much they appreciate their fanclub FANTASY! Check out SF9‘s ‘FANTASY TIME‘ plan below! 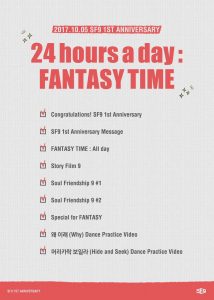 SF9‘s gifts to their fans will include messages from the group, a story film, dance practice videos for their tracks ‘Why‘ and ‘Hide and Seek‘, and something mysteriously titled ‘Special for FANTASY‘. With all this to look forward to throughout the day, October 5 2017 is sure to be a date etched SF9 fans’ memories!