Thanks to fans, Young Jae from GOT7 finally got to meet one of his favourite singers, Elliott Yamin!

Young Jae posted a picture of him listening to Sanjoy‘s new song ‘Obvi‘, which features Elliot Yamin. He left a caption along with his post saying, ‘Yamin Hyung, please release an album‘.

Immediately, GOT7 fans saw his post and started to tag Elliot Yamin and Sanjoy to grab their attention. Luckily, Elliott saw the messages and instantly thanked the fans for all their support by leaving a comment. And just like that, he replied back to Young Jae! He even tagged Sanjoy, and they both interacted with Young Jae on the actual post! 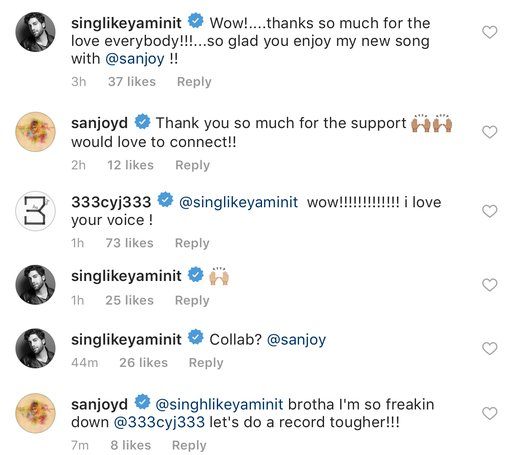 GOT7 was in Los Angeles over the weekend for their fan meet tour (‘FLIGHT LOG: TURBULENCE IN USA 2017 FANMEET TOUR‘), giving Young Jae the chance to meet with Elliott!

@333cyj333 @singlikeyaminit @russellali12 and I hanging backstage. Youngjae you're the man! Let's make this the collab of the year #GOT7 #obvi #youngjae #sanjoy #elliottyamin

Both Elliott and Sanjoy posted photos and videos on their Instagram accounts. There were even some talks about a collaboration between the three artists!

Be sure to check out Sanjoy’s new song ‘Obvi‘!

Congratulations to Young Jae on his amazing experience and chance of meeting one of his favourite American artists! We may see a collaboration in the near future! What do you think?