Actress Hong Soo Hyun and rapper Microdot have officially confirmed that they are dating!

An industry representative has confirmed that the two developed a friendship after appearing together on the fishing variety show, Channel A’s ‘The Fisherman and the City’ last October. Microdot is a permanent cast member on the show, while Hong Soo Hyun was making a guest appearance.

The source says that the couple recently confirmed their feelings for each other and have become a couple! In fact, Hong Soo Hyun’s agency confirmed too, that the two progressed their friendship after the show by hanging out with friends and have begun recently dating as they continue to get to know each other. 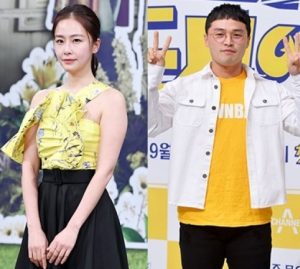 Hong Soo Hyun is known for her roles popular dramas, including ‘Dae Jo Yeong’, ‘The Princess’ Man’ and ‘Goodbye Dear Wife,’ while Microdot is a famed rapper who first debuted as a member of duo All Black with Dok2 in 2006. Interestingly, the couple has an age difference of 12 years, as Hong Soo Hyun was born in 1981, and Microdot was born in 1993, but no doubt this couple will make it work!

The rumours first began to circulate following some flirtatious messages the two have shared over their social media accounts, and it’s exciting that the two have taken their relationship to the next, official level!

Congratulations to the new couple, Hong Soo Hyun and Microdot!

Scroll for more
Tap
Our exclusive sneak peek at G-Dragon’s new cafe!!
Combining his role in Astro with a burgeoning acting career – Cha Eun Woo can do it all!
Scroll
Loading Comments...