We were honored to be part of the crowd for IMFACT´s concert in Berlin, Germany, and would like to share our experience from this concert with you all.

The concert in Germany was moved to a smaller venue – Maschinenhaus, but this change did not lessen the atmosphere as the brick shaped walls reflected the lights which only added the right feel to the performances.

The fans were waiting in front of the building from early morning and when the time for them to come inside neared, the members showed on the balcony to greet them all before the concert. This gesture brought energy back to the fans´ veins after the long wait and they excitedly lined up for the entrance to the venue. 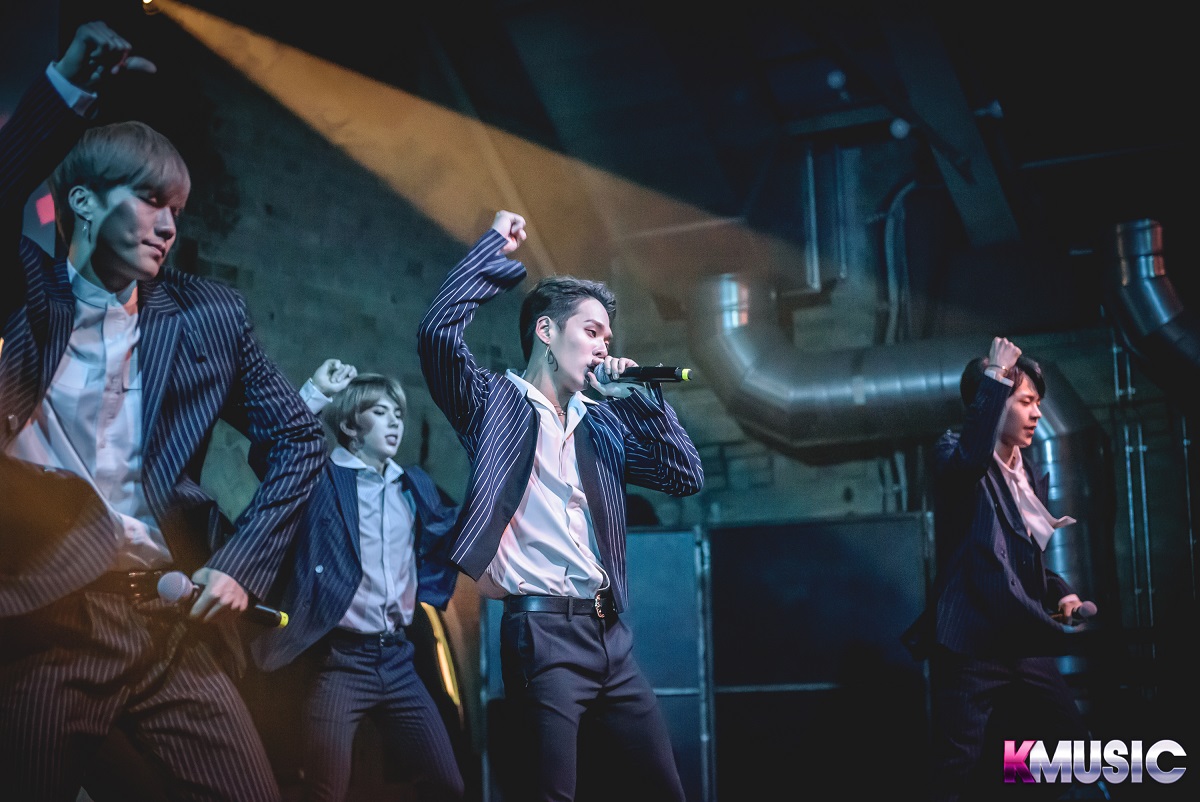 The group appeared on the stage wearing sleek black suits and performed the first songs of the night: “Only U” and “NaNaNa”. The fanchants echoed through the hall and the atmosphere got heated up in an instant. After a short introduction MENT the group continued with “The Light, “Feel so good” and “Trouble maker”.

Leesang enchanted everyone with his powerful rap and we noticed that Jaeho seemed to be lured by the fans´ cameras pointed to stage as he kept on singing into the screens so that fans have a unique memory.

During the following song “Mirrorz” the two above said members gained a lot of attention when Leesang softly caressed Jaeho´s cheek at the beginning of the song.

When Leesang wanted to introduced the next track by saying “The next song is very…” the fans finished his sentence by screaming “Sexy!” and Leesang could not protest since the next on the list was “Woo”. For this track Ungjae was the scene stealer with his constant ruffling through his hair or doing body waves. 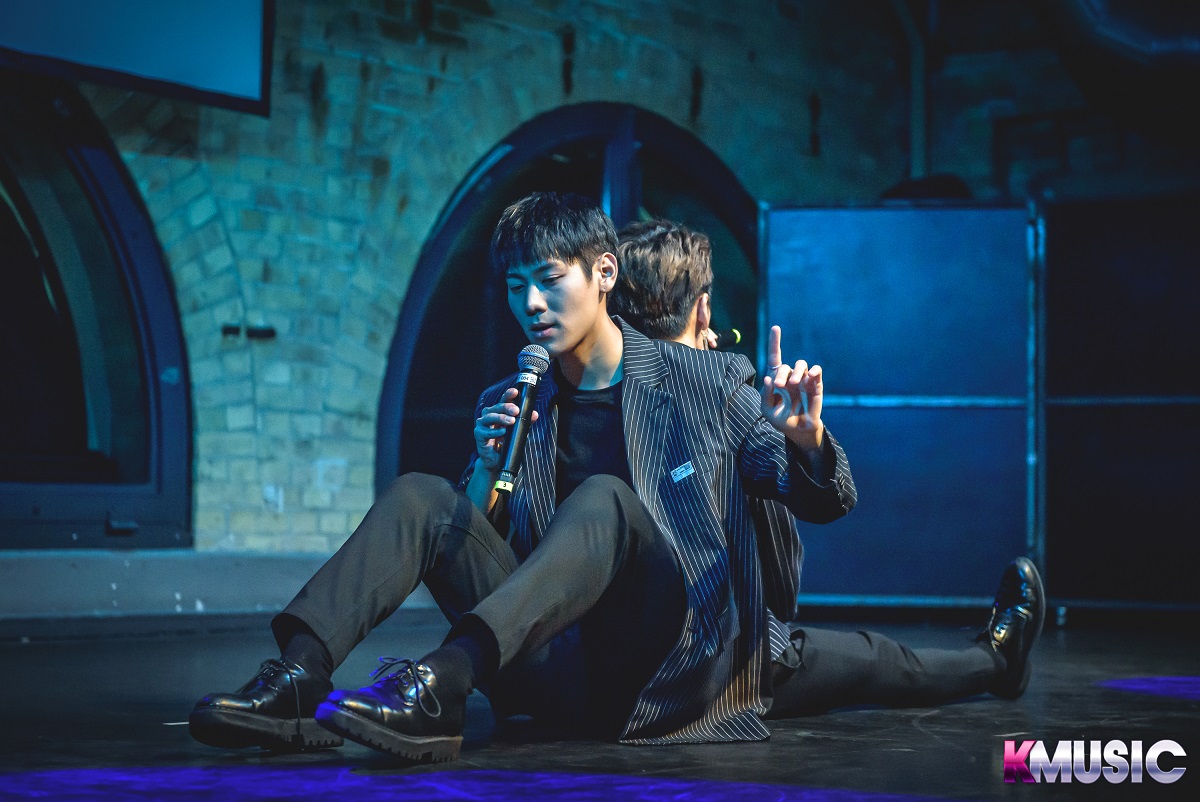 Before the segment filled with solo performances Leesang and Jian claimed the stage for a short MENT. Jian pointed out it is suddenly so hot in there, but he did not gave in when Leesang advised him to take his shirt of then. And you can imagine what a loud response this idea received from the fans. But Jian remained his cool and started joking with Leesang when he asked where their friend Taeho is.

“He is back. Back in Korea!” Jian waved in uncertain direction.

“Maybe, then, your scream will bring him back here to Germany.” The fans picked up on the hint and started chanting Taeho´s name, bringing the singer from the backstage to perform “P.Y.T.” 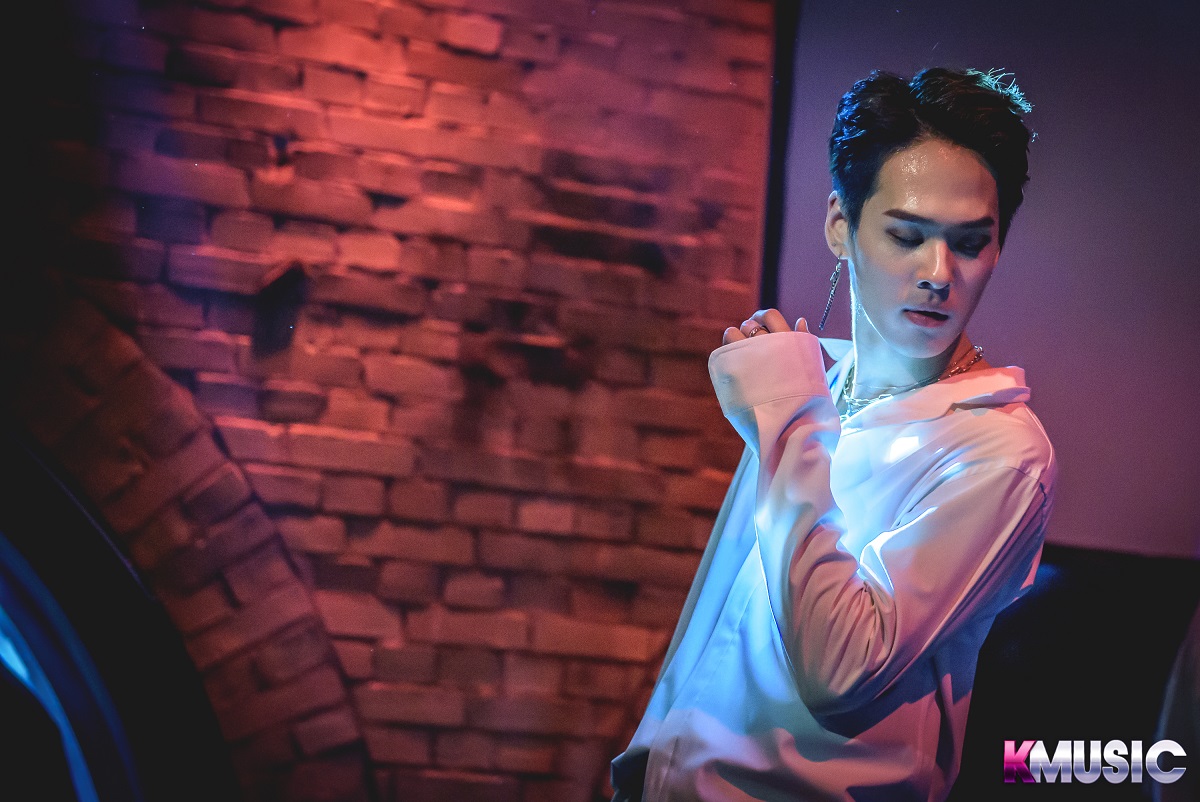 All of the solo stages were magnificent, but we want to point out two of them. Jian´s cover of G-Dragon´s “She is gone” which was simply breathtaking. He took us all by surprise with the perfect cover and dynamic rap. We believe this stage brought imaginary heart attacks to all the fans in the front row when Jian ripped his shirt into pieces at the end, . The second stage we wanted to repeat over and over again was Jeup´s “I promise you”. The soft purple light was falling on his shoulders and his voice filled the suddenly quiet venue in the soft love melody. It was the sweetest performance of the night. 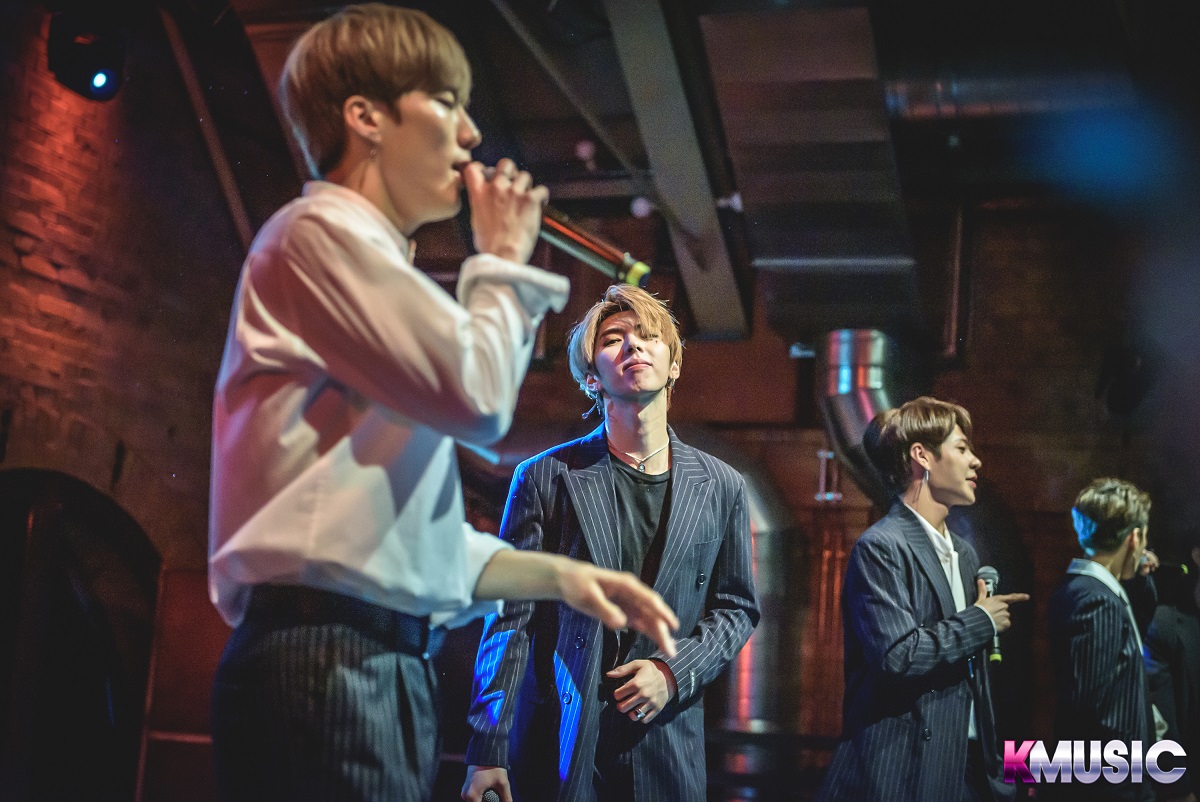 After another set of songs (“Got them”, “In the club” and “She is”) it was time for the next MENT during which the members shared their hearts with the fans.

“We did not know we will receive so much love here.” Leesang said and then thanked the fans for coming and showing such incredible support. The other members joined in by saying how moved they are by the welcome they received and the energy the fans showed during the night. Jeup especially praised the fans for the banners they prepared for the groups, holding the banner in his hands and posing for the fans to take photos of him. 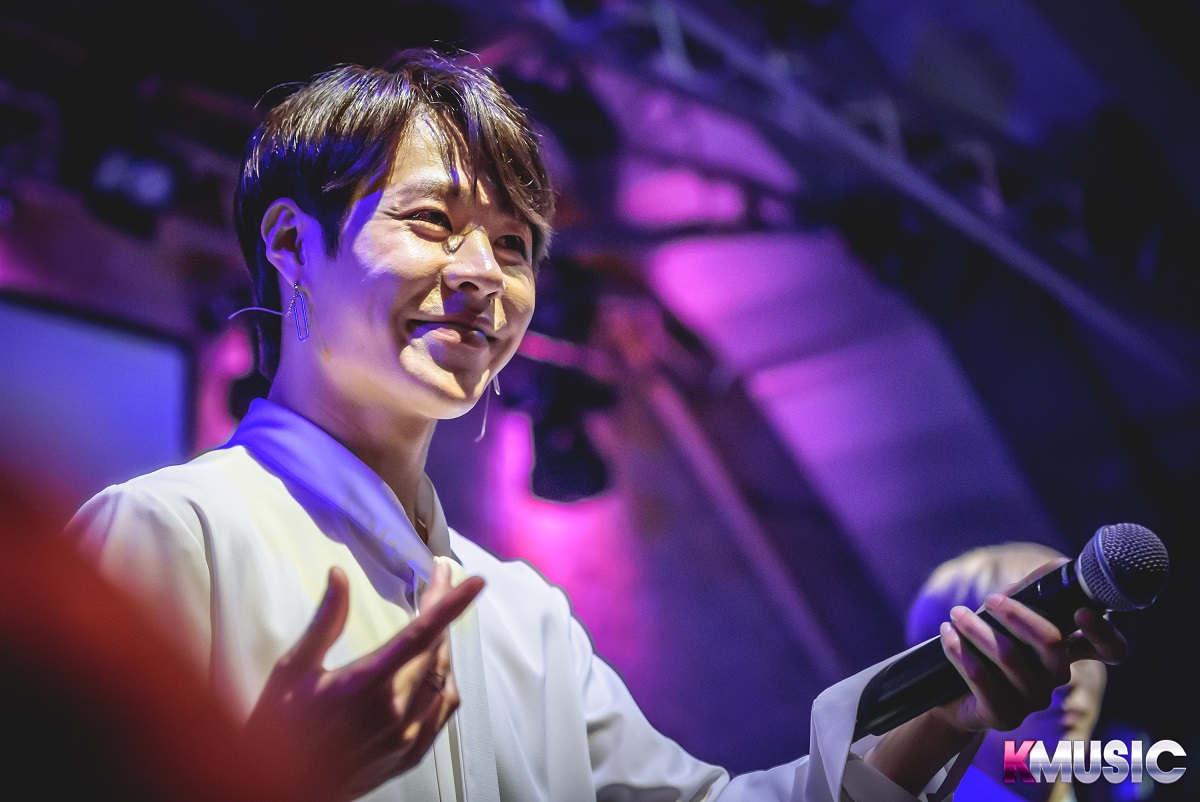 The three lasts songs were filled with happiness as as well passion. The group performed “4LOVE” and “Please be my first love”. The last song before the group left the stage was the highly requested “Lollipop” which was like a cherry on top to round this concert experience in perfection.

The fans did not want to leave just yet. Everyone was enjoying the night and the last set of songs just pumped the atmosphere to maximum. The group seemed to enjoy their cheers too so they appeared on the stage again to perform “Tension up”, “Only U” and “NaNaNa”. 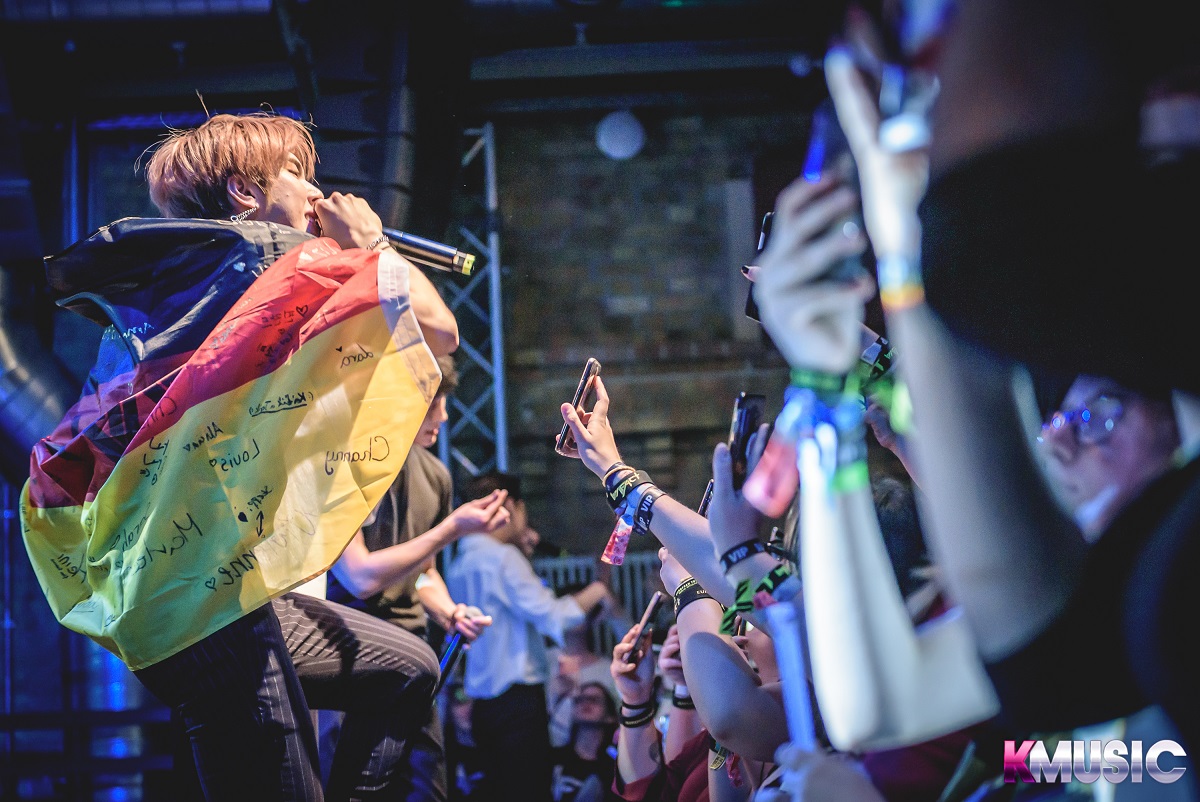 The concert was over in a blink of an eye, yet it left a deep impact on us. The group was enjoying the stage, showing their best and proving they are the right group to support. The fans were overjoyed to jam to their songs, shed tears of happiness and screamed at the top of their lungs whenever the members stood on stage in front of them. 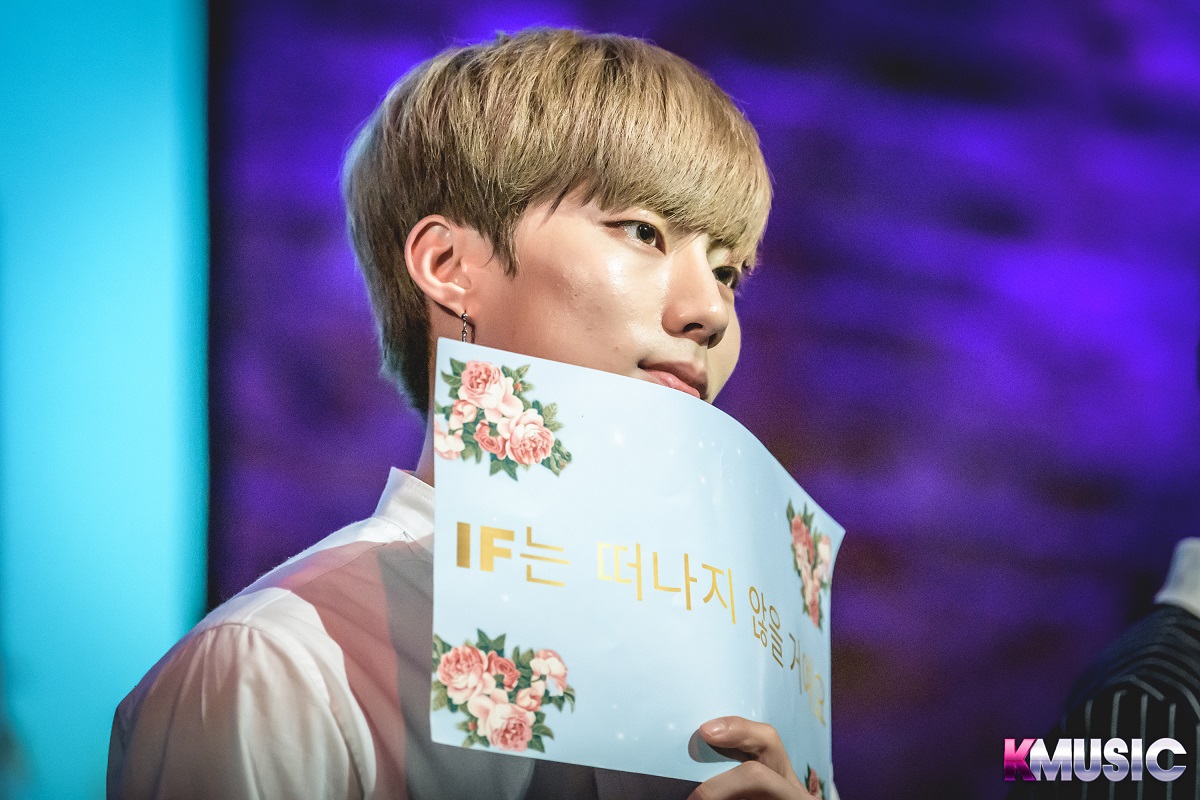 We would like to thank Kanzen Music for bringing IMFACT to Europe and giving us and the fans the opportunity to enjoy such an amazing night!

Do not forget to check the full photo album from this stop. We send out thanks to the incredible photographer By.zero for making these stunning photos.

Scroll for more
Tap
K-Exclusive: Sik-K Teams Up With HAON, Takes His Shirt Off, and Brings the ‘Party’ to Sydney
K-EXCLUSIVE: Catching up with Yiruma at Melbourne Press Conference for his ‘Frame’ Tour
Scroll
Loading Comments...