K-EXCLUSIVE: Interview with K.A.R.D in Chicago

K-EXCLUSIVE: Interview with K.A.R.D in Chicago

After covering their fanmeeting on the evening of May 5th, we were given the fantastic opportunity to go back stage at the Copernicus Center in Chicago to talk with promising rookie co-ed group K.A.R.D.

The quartet, who have not yet even debuted, have already gained popularity state-side for their dance worthy tracks and solid choreography. Last year the newest DSP Media group began with the first two steps of their debut project in the releases of singles ‘Oh NaNa‘ and ‘Don’t Recall.’ Both had hidden extras. First was the revelation of a “hidden card” in the form of Heo Young-ji, a fellow label mate and former member of KARA. Second was the English version of ‘Don’t Recall’. And in April of this year, members Somin, Jiwoo, BM, and J.Seph completed their 3-step debut project with the release of their third single, ‘Rumor.’ This also had a hidden element – a dance version that featured their choreographer, Z.Sun, as the “hidden card.” It’s no surprise that their upcoming full debut has already become one of the most anticipated of the year. 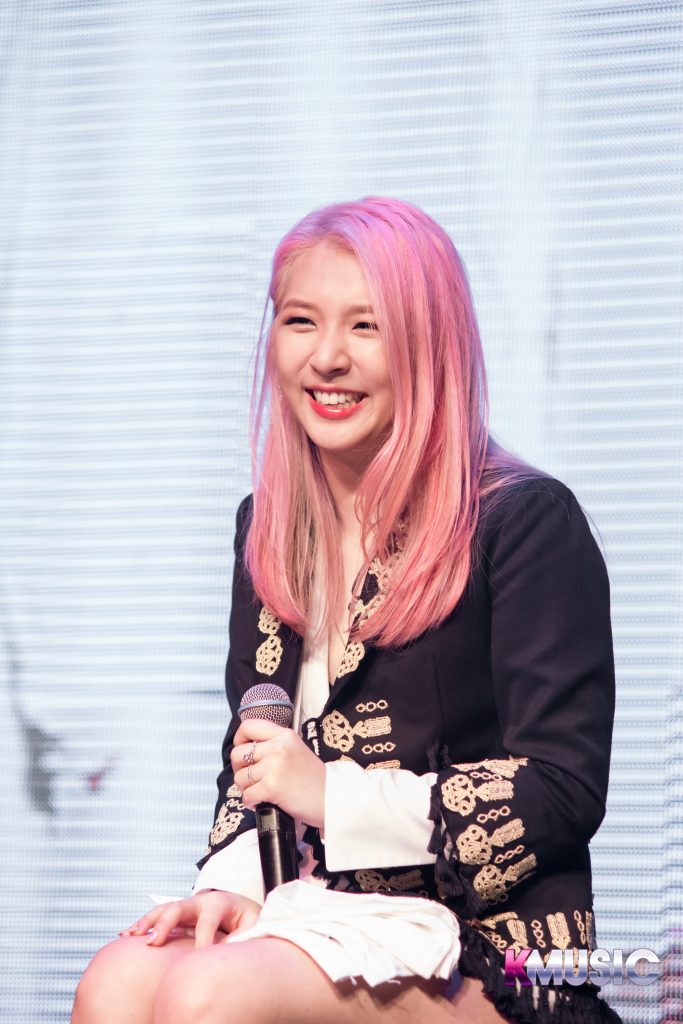 [KMusic] : Obviously besides performing and meeting all the fans, what are each of you looking forward to seeing, doing, or eating in Chicago besides deep-dish pizza?

[K.A.R.D] : We like Michael Jordan. And we want to go shopping as well.

[BM] : I’d like to see the silver bean – the big silver bean. I saw it in a lot of movies and I thought it’d be interesting to see it in real life.

[KMusic] : Second question, I know most of you have been training for about five years – how have each of you guys’ goals changed since training and preparing to debut with each other?

[J.Seph] : Our objectives and goals haven’t changed; they still remain the same. We’re super thankful for everyone, like all the staff, that worked really hard for us, as well as our fans and our parents. We’re just super thankful, and enjoying what’s going on right now. 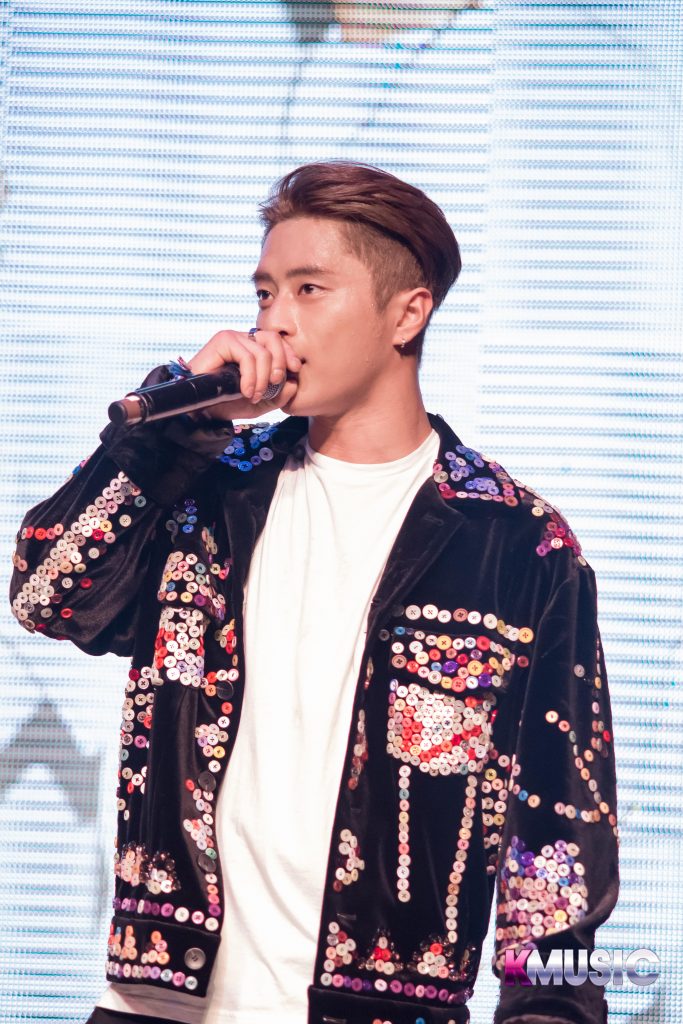 [KMusic] : How would you describe K.A.R.D’s sound and color? What kind of musical styles would you want to show fans in the future?

[Jiwoo] : Right now we are doing a lot of music with really trendy sounds, but as a group we all have such different colors and different styles of music that we like. So in the future we would like to try a lot more diverse sounds.

[KMusic] : What type of music, what genres?

[KMusic] : BM, I’m sure you struggled quite a bit when you first moved to South Korea. What’s the one thing you missed the most after moving besides your family and friends?

[BM] : Um… corn nuts. I miss corn nuts a lot. Hot Cheetos, for sure. And prolly the culture – just being free and, yeah. The culture and corn nuts. 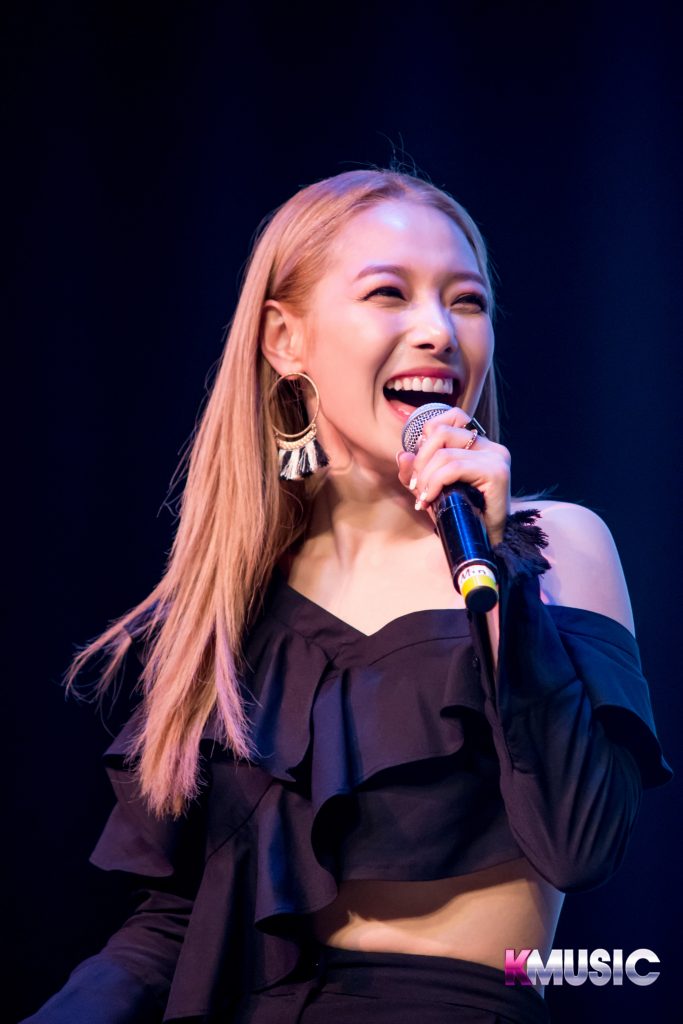 [KMusic] : What do you guys like to do to relax during your free time? Do you guys play games or watch any K-dramas or anime?

[Jiwoo] : Shopping…. I also like to read, and to look for new kinds of music. 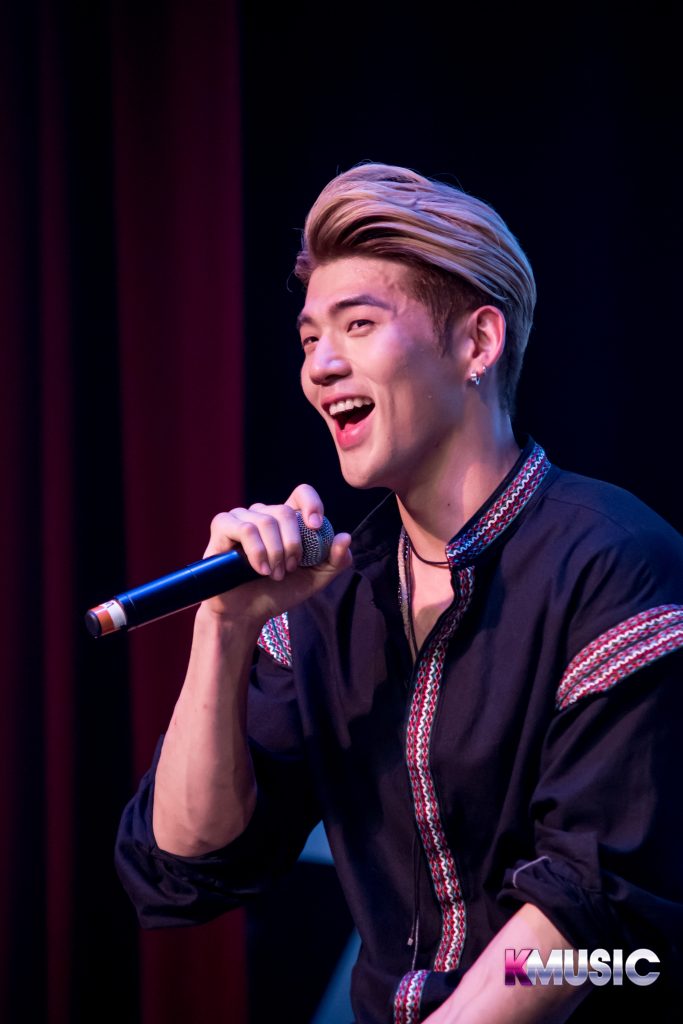 [KMusic] : What one of the weirdest things one of the members has done when lacking sleep?

[Jiwoo] : Somin is actually a really big morning person and has a habit of going to sleep really early, so when we have practices that last until really late at night or into the early mornings, she becomes a zombie and she starts acting like a grandma – like an old person.

[KMusic] : Who’s the “fashion terrorist” of the group?

[Jiwoo, BM] : (laughing) There’s no fashion terrorist! We’re just all really loyal to our own senses of style. 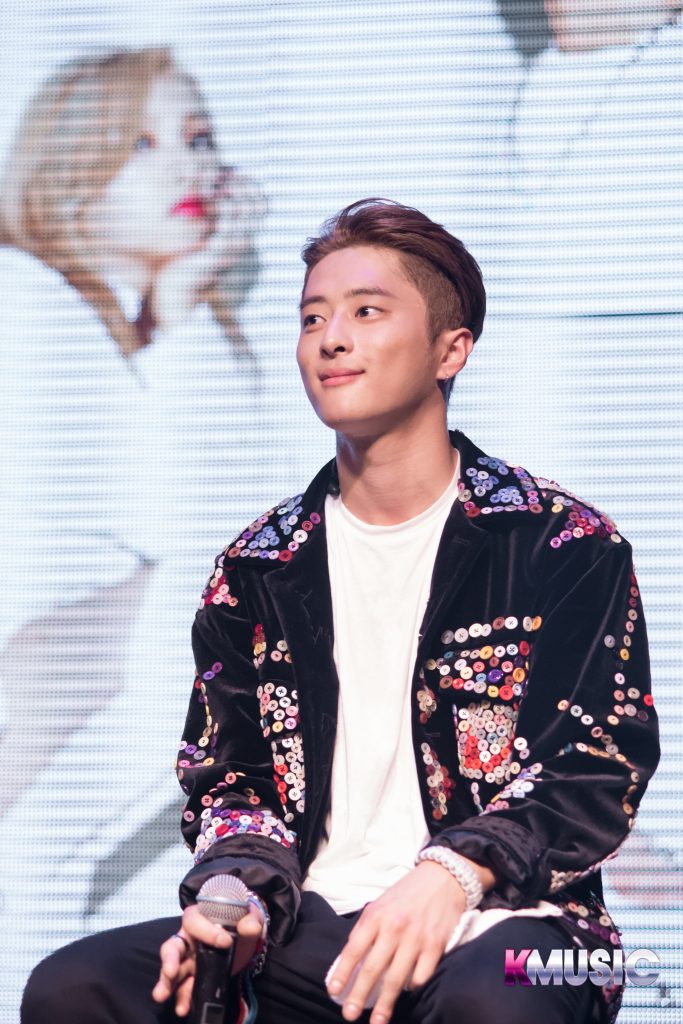 [KMusic] : What type of style do each of you have, then?

[BM] : I used to be into super baggy, and like hip hop-y type style but nowadays I kinda wanna go for, like, a more mature, more fitted look. I think that’s it.

[Jiwoo] : I am really interested in fashion. I like bohemian style, and simple hip hop. Really I try to wear many different styles.

[KMusic] : Is there a brand you would love to collaborate with?

[KMusic] : If each of you had to choose one song to listen to for the rest of your life, like even if something else is playing you still want to hear that song, which one would you pick? 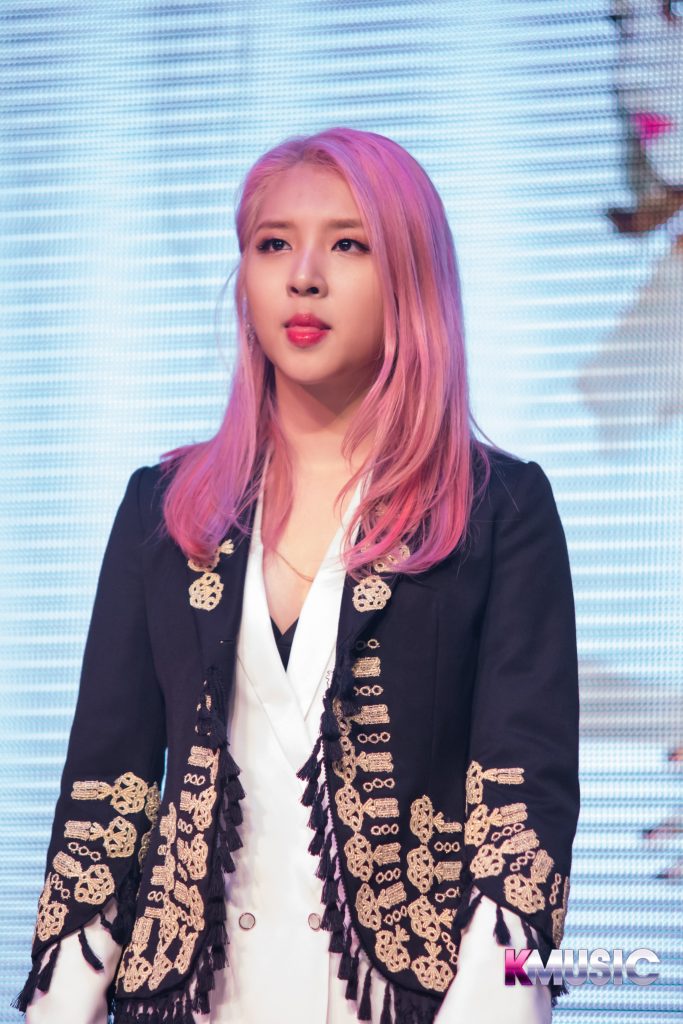 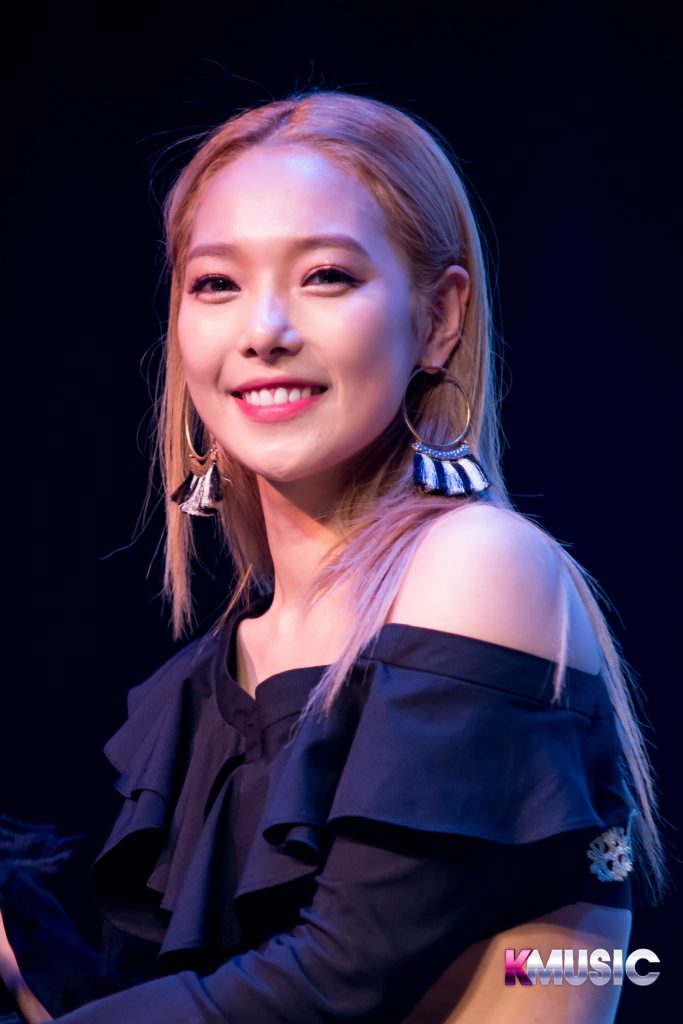 [KMusic] : So now we’ll move on to some of the fan’s questions. If you could be any animal, what would you be and why?

[Somin] : A puppy, because they’re cute.

[KMusic] : How do you guys feel about meeting your international fans for the first time?

[J.Seph] : It’s daebak. Like, really awesome. I still can’t believe it – I feel like my soul was taken away by our fans.

[BM] : So like, you know, we’ve never seen any of their faces, but they come to see our faces… and it’s just like, um … it’s to the point where it’s like, damn, what did I do to deserve this? So it’s really humbling and it’s really… it makes us really thankful, I think.

[KMusic] : Since we’re an Australia-based company with followers from around the world, what are some last words you want to say to your fans, not just in Korea and North America, but all around?

[J.Seph] : So we haven’t officially debuted yet, so of course we need to try our hardest and we are trying our hardest to match up what the fans are expecting out of us. And we definitely want to see our fans all over the world from when we can. And we will try our hardest to do that. 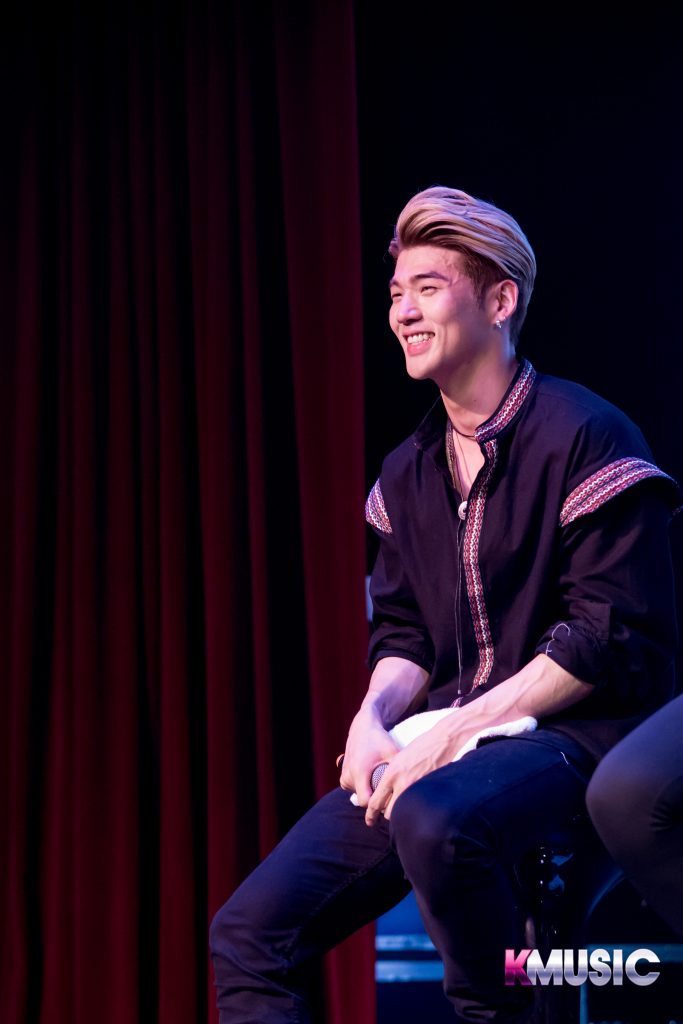 Many thanks to both DSP Media and Subkulture Entertainment for giving us the opportunity to spend some time with the group. And of course we’d like to offer our sincere thanks to the members of K.A.R.D for taking time out of their busy night to sit down with us. For HD photos, please take a look at our photo gallery here. Stay tuned to Officially KMusic for the latest news on Korean celebrities and exclusive coverage on various concerts and events! Don’t forget to take a look at our calendar for the latest events near you!

Kat. ¯\_(ツ)_/¯ Writer, Editor & Photographer. Born in San Fran, heart in London, roots in Norway, life in New York. I'm a life-long music lover, French Hornist, lowkey professional norae-banger, and lowerkey amateur beat maker. The KPop life claimed me in 2009 with 'Sorry Sorry,' and I never looked back. Hip Hop is my philosophy, SHINee, BTS, and BAP are my soul and VIXX are musical goals.