K-EXCLUSIVE: Monsta X in Berlin – The Reason why fans lost their voices

K-EXCLUSIVE: Monsta X in Berlin – The Reason why fans lost their voices

You can lose your voice in many ways (for example by being tied to a roller-coaster, which is personally not my favorite freetime activity), but there is surely one way we would all pick over anything else – meeting our idol.

There were seven reasons for fans in Germany to lose their voices on 11th of August. The reasons were called Shownu (the father-like leader),Wonho (the overly sexy one),Minhyuk (the most talkative one on Earth), Kihyun (the most amazing voice), Jooheon (the cute rapper), Hyungwon (the sleepy handsome) and I.M (the forever mysterious one). And let´s be honest – MONBEBEs, the fans of Monsta X, were not the only one who enjoyed the day to the fullest. But let´s take it step by step.

Monsta X is a group born out of the survival program called ‘NO.MERCY‘. They officially debuted in May 2015 and swept all charts as well as fans´ hearts. Their fastly growing popularity resulted in a demand for a world tour and so the group launched their ‘First World Tour “Beautiful”‘. The immense love of European fans were recognized as well and the group announced the European leg of this tour. This tour has stops in three cities across Europe and we had the chance to see them LIVE in Berlin!

The concert was taking place at the Tempodrom venue in the heart of Berlin. The fans waited in the rain for hours before allowed to go inside and grab their seat or place in front of the stage. To wash away the fans´ tiredness and to make the time pass by quicker, Monsta X´s songs were played in the venue. And the fans were very enthusiastic about it. They cheared loudly, clapped their hands to the rhythm and did fanchants as if the boys were already on stage. Little did they know that this was only a little excercise for their lungs. 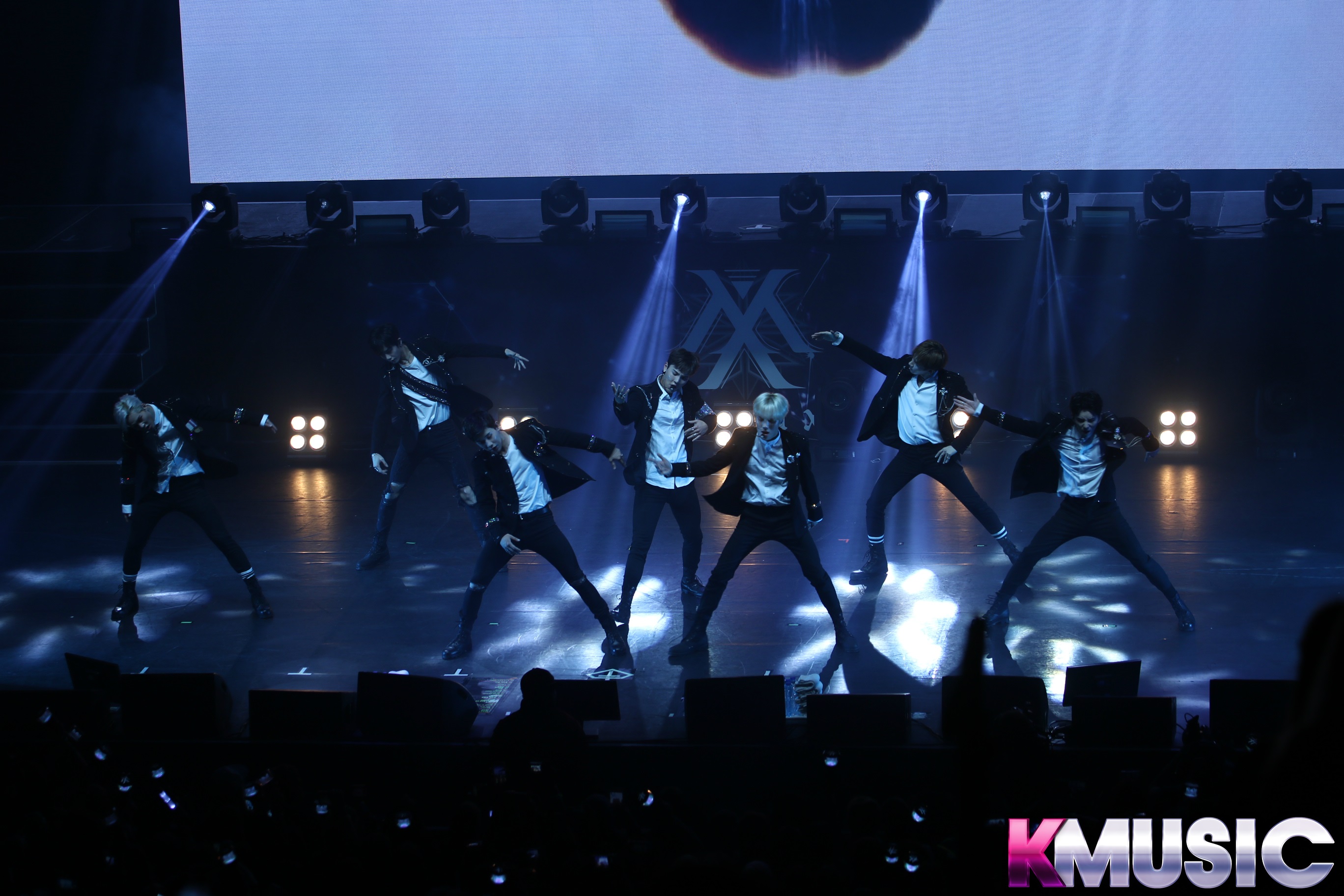 The hall went dark when everything was ready and an intro video begun. It was the beginning of the two-hour concert everyone was going to have the best memories of. The boys appeared on stage wearing black suit jackets over white shirts and black pants. The clothing had nice silver and shimmery details to it which made them shine on stage even more. The fans were swept by their precise dancing and beautiful voices and cheered so loudly the venue was shaking hard. The group performed three songs in a row – ‘Beautiful‘, ‘Incomparable‘ and ‘Hero‘.

“Schön euch zu sehen” greeted the fans Wonho, saying “Nice to see you” in Deutch. Wonho was brilliant during the whole concert by showcasing what he learnt in German for the concert. And he got an amazing response from the fans by trying speaking their mother language, including some slang words. In general, at least one third of what the members said during the night was in German and they even put some short foreign words into the lyrics of their songs which gained even bigger response from the local fans.

The following songs were ‘Ex girl‘ and ‘White love‘. After these two beautiful songs the members moved backstage to change their clothing. While some members were changing, the rest remained on stage and talked about the tour and the stop in Germany. Kihyun said he is very happy about how the fans are doing a great job cheering so loudly. Jooheon sung their song ‘White love‘ acapella. Despite being afraid it might sound strange without the others helping him, he did a great job.  Shownu was voted as the most romantic guy in Monsta X and sung a part of a romantic song. Hyungwon was voted to be the best at aegyo so he showed some overly-cute poses that made fans´ heart melt in an instant.

The concert continued with ‘Ready or Not‘, making the venue shake with not only loud music, but with, most importantly, the fans´ fanchants. The song ‘OI‘ also added the fire into their veins. After a short unit talk video the members took over the stage with solo performances.  Wonho and Hyungwon performed ‘From Zero‘ which made fans crazy. Hyungwon returned to stage as DJ that changed the venue into a club. The fans were jumping and partied hard, at that time not knowing that Jooheon will be joining the stage soon with his energetic rap. Shownu, Minhyuk and I.M entered the stage under the beats of ‘24K Magic‘. Jooheon then returned to stage with Kihyun as they performed ‘Mirror‘.

After this ultra-superb dose of individual talents, all of the boys appeared on stage for a short talk session. They were wearing light blue and white clothing and joked with fans and with each other. The clothes in gentle colors hinted the following songs will be romantic and slow ones. And so they performed ‘Honestly‘, ‘Sweetheart‘ and ‘I´ll be there‘. 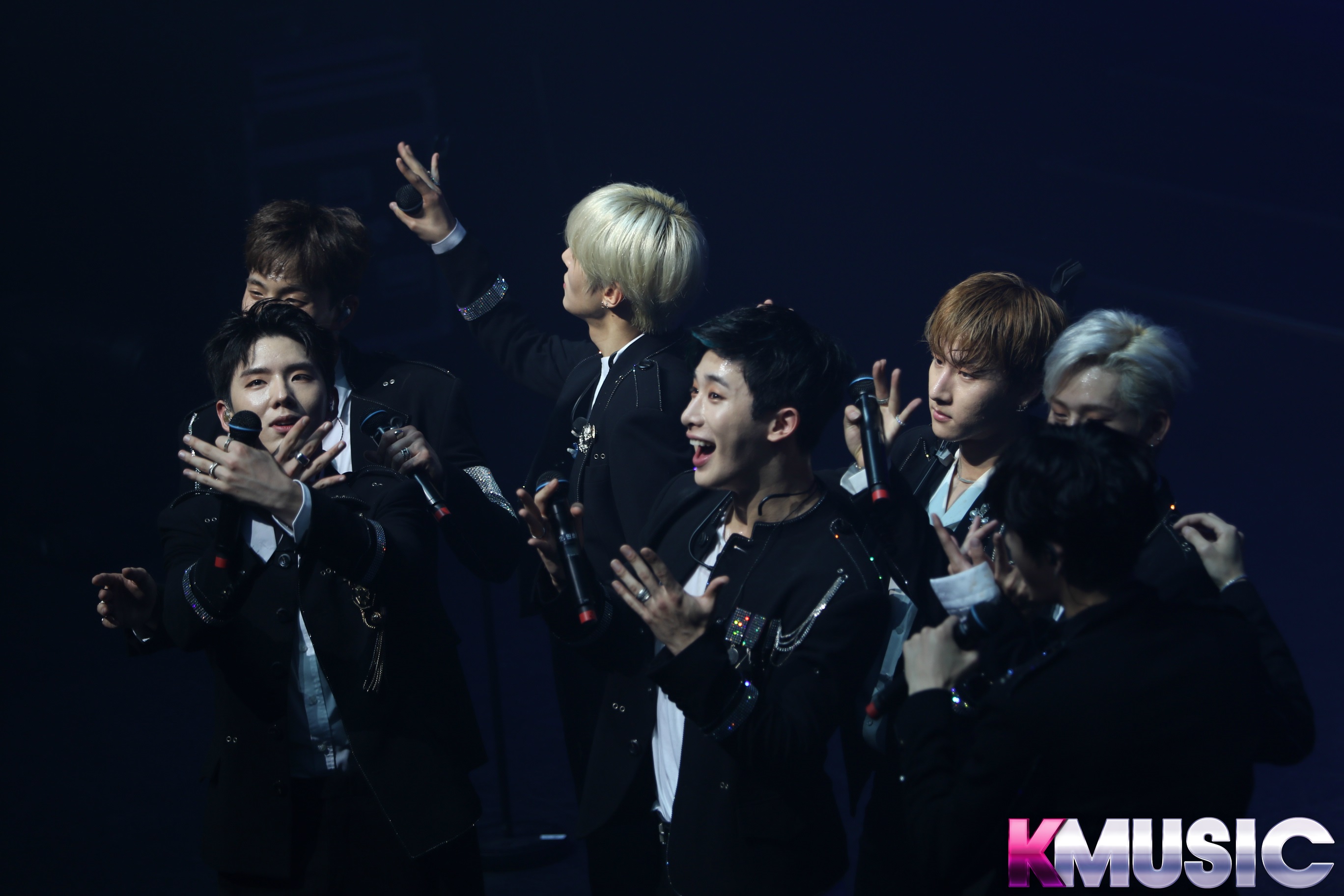 To have time for clothes change after these songs, a VCR video was shown. It had a nice story connecting all of their albums into one story line. After this VCR the members appeared on stage wearing red clothes and since then they went on a ride with the fans by performing their hit songs ‘Shine forever‘, ‘Be quiet‘, ‘Broken heart‘ and ‘Blind‘. During the song ‘Broken heart‘ the back screen showed light behind the member that was currently singing, using a different color of light for rap parts. The following set of songs were the most expected stages, being it from Monsta X´s last albums. The group performed ‘All in‘, ‘Trespass‘, ‘Rush‘ and ‘Fighter‘ with an amazing stage presence and under a loud lead by the fans´ cheers.

The hall went black suddenly and hourglass appeared on the screen, showing the time is up and that the concert is indeed on its end. Fans felt sad about it and did not want this incredible experience to end so quickly. So as the hourglass started to fill its bottom part, the fans started screaming loudly and stomping their feet as if it was in their power to stop the upcoming end. Before the last grain of sand fell down into the hourglass the picture was broken into pieces and Monsta X stepped on stage again with ‘No Exit‘.

During one of the last talk sessions of the night Jooheon promised the fans they will surely come back to Germany in the future. The fans were ecstatic to hear such news though it was hard to tell whether they are more happy to hear Jooheon´s promise or to see Wonho showing his abs, trying to distract fans from what Jooheon was saying.

“I think this city is beautiful and you improve that (image of the city). You make us shine! So let´s write the last page together,” said I.M announcing the very last song of the concert – ‘5:14 (lost page)‘.

With the last song the concert ended. The members thanked the fans over and over again by welcoming them in Germany with open arms. Fans were shouting thanks to the boys for a long time, showing their banners, crying in joy and wishing they could prolong the time spend with their idols. As for us we only have praise for the group and the whole staff team. The members did their best and had fun on stage. They prepared a lot of popular phrases and sentences in German which was very surprising and nice of them! Also, all of the VCR videos had German subtitles too. What we absolutely loved was the lightening of the stage which was on point during the whole concert and put more depth into the performances. We were very happy to be present on Monsta X´s concert and wish only the best for the members to the future. Maybe we will see them here in Europe again. And this time, we hope to see you there too!

A big thanks goes to MyMusicTaste for allowing us attending this concert and preparing such a wonderful experience filled with warm memories for European fans.

Please go and check the rest of the photos from the Paris stop HERE.