Gather ’round all European MONBEBEs! Your idols, Monsta X, are coming to Europe for their first world tour ‘Monsta X: Beautiful in Europe‘. The boys are going to visit three cities in Europe this August – Paris, Berlin and Moscow.

Monsta X is a boy group formed thanks to the survival show ‘NO.MERCY,‘ which aired on Mnet in 2015. There are seven members in the group: Shownu, Wonho, Minhyuk, Kihyun, Hyungwon, Jooheon and I.M. Their first album´s song ‘Trespass‘ now has more than 12 million views on YouTube. Their second album ‘Rush‘ was another hit that secured third place on Music Bank for the boys. In their latest albums ‘The Clan Part. 1 ‘LOST’‘ and ‘The Clan Part. 2 ‘GUILTY’ they showed a different concept that gained love from fans all over the world. Check out their song ‘Beautiful‘ below.

The members of Monsta X have collaborated with other artists, such as Mad Clown, Yoo Seungwoo, Brother Su and WJSN. They’ve been featured on soundtracks for dramas, for example ‘Protect the Boss‘ and ‘Shopaholic Louis‘. They also appeared in some dramas themselves (‘The Producers‘ or ‘Goodnight, Teacher‘) and it’s a must to check out their many reality shows like the ‘Deokspatch‘ series, ‘Right Now!‘, ‘CH.MX‘, or ‘Monsta X-Ray‘. Surely a lot for such a young group!

Be ensured they will have loads prepared for their fans for the tour in the following cities: 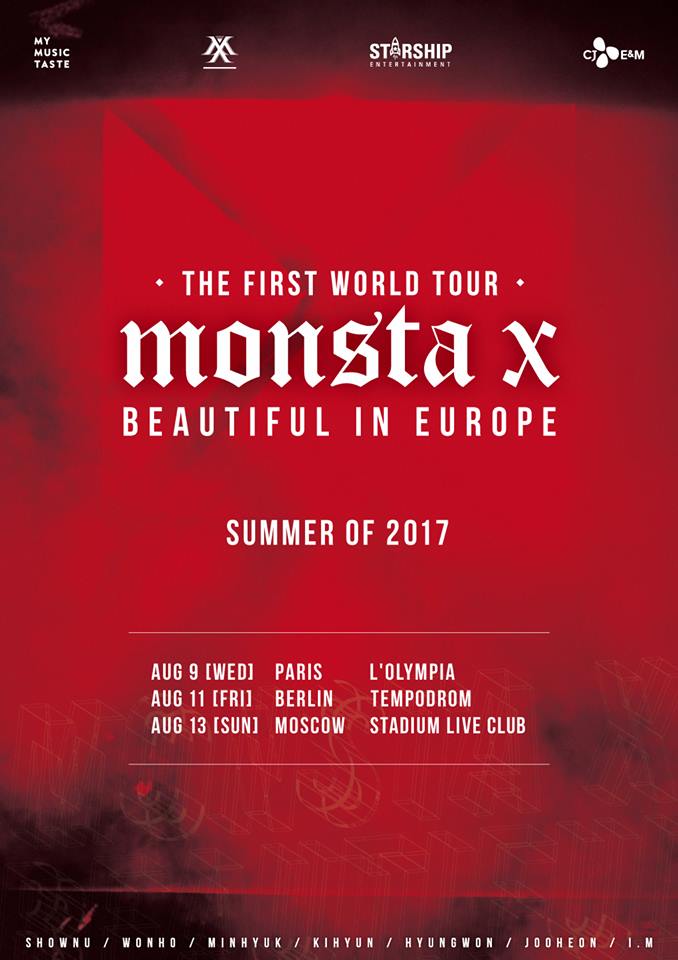 Stay tuned to Officially KMusic for more updates regarding this tour and other Kpop events near you!