After bringing the heat to Austrailia recently for their ‘Shangri-La‘ concert in Melbourne and Sydney, VIXX brought the heat to GAIN CITY, Singapore on 2nd December 2017 with an open press conference. As VIXX was back in Singapore after 18 months, Starlights gave a passionate welcome to their idols as they entered the stage to start off the press conference. 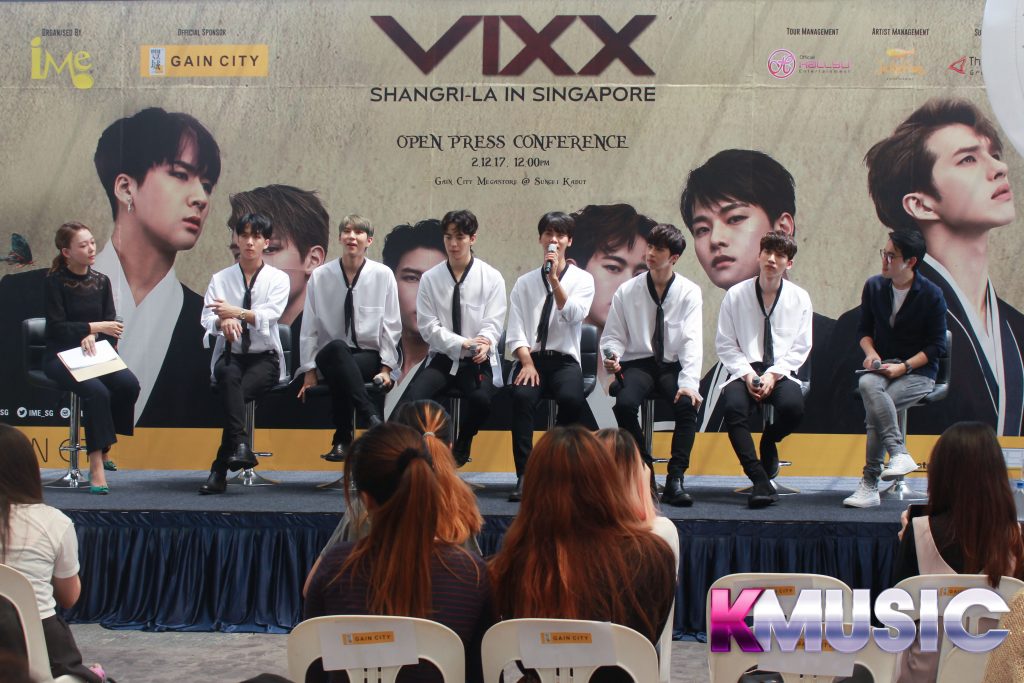 The members shared that they had some time to tour around the sunny island. They ate Singapore’s signature dish, the Chilli Crab and bought bottles of Kaya Jam as they love it so much. Although their tour is coming to an end, VIXX are always excited to interact with fans as they get to recharge with the energy from Starlights. After hearing that, Starlights shouted “Saranghaeyo” to VIXX and they replied with “Me too!”. 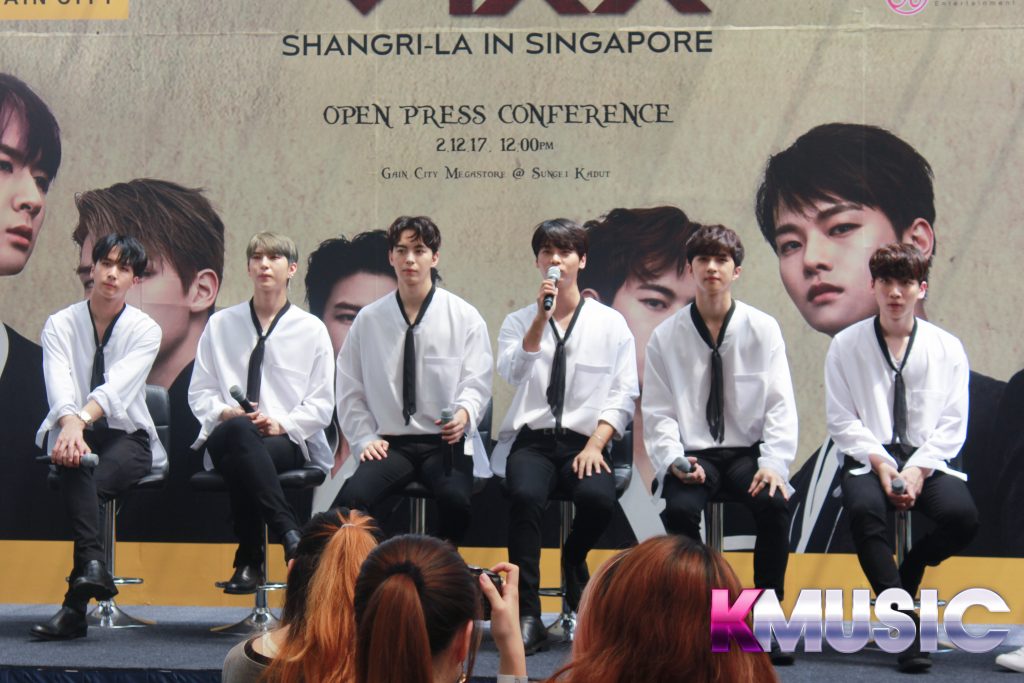 The press conference then continued with a questions and answer segment.

What other concepts would you like to try and stay away from?

VIXX would like to keep it a secret so that fans can anticipate our future projects, but they always wanted to try something more sexy, attractive and charming. As for concepts that they would like to stay away from, VIXX believed that we could pull off any concept so there is nothing they would not try. 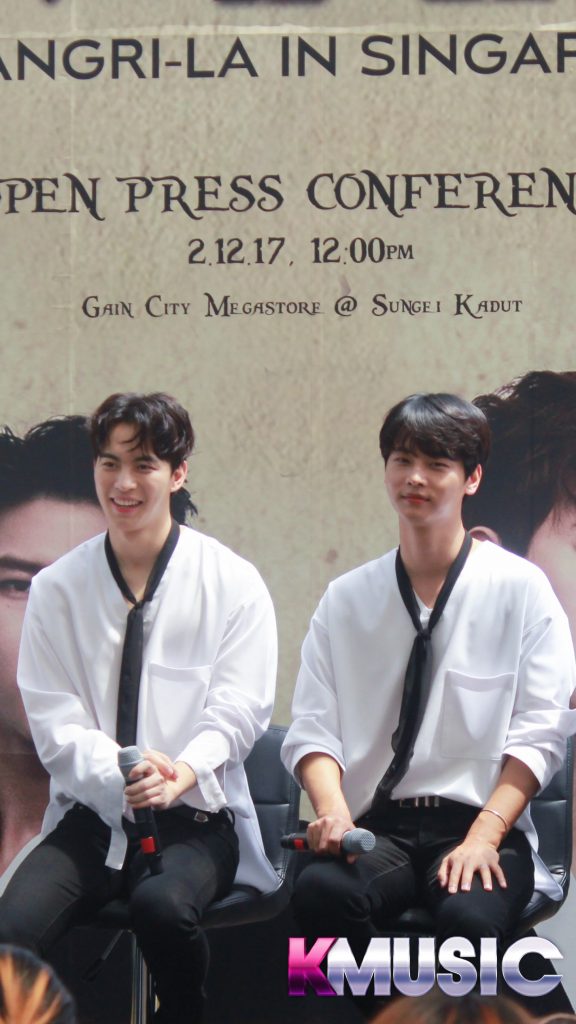 As this time, VIXX are back in Singapore for a full-scale concert, is there anything special that you have prepared for your fans?

It will be their first time performing songs from the album, ‘Shangri-La‘, ‘Blackout‘ and ‘Shangri-La‘ so Starlights could look forward to it. They have also prepared an interactive session where they get to have fun with our fans. 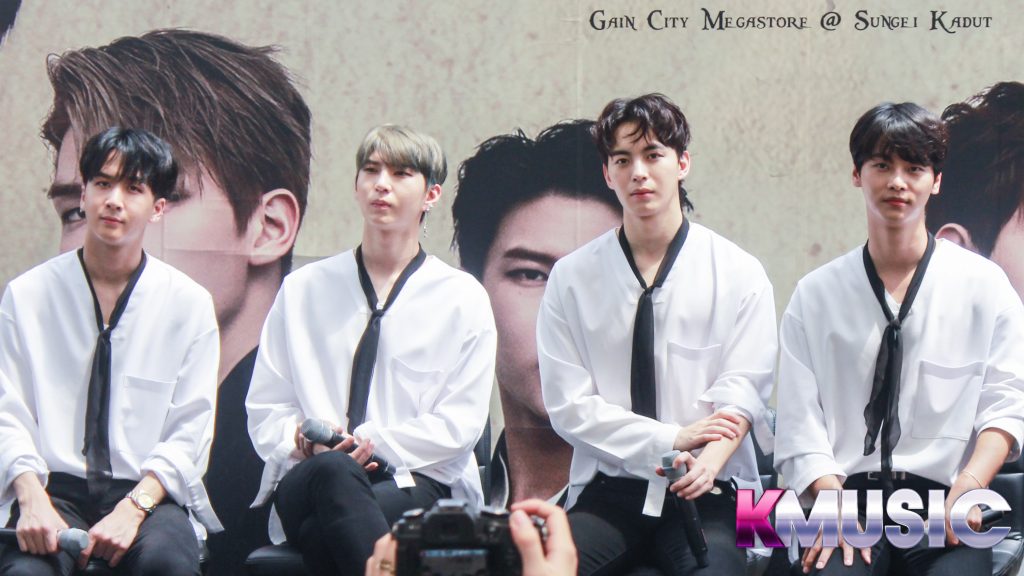 As 2017 is coming to an end, what are some of the song recommendations you have for Starlights?

Before VIXX say the name of the song, they just wanted to say that it has been a fantastic year for them and they hoped it has been a good year for Starlights as well so the song VIXX would like to recommend is ‘Shangri-La‘, the title song from the latest album. 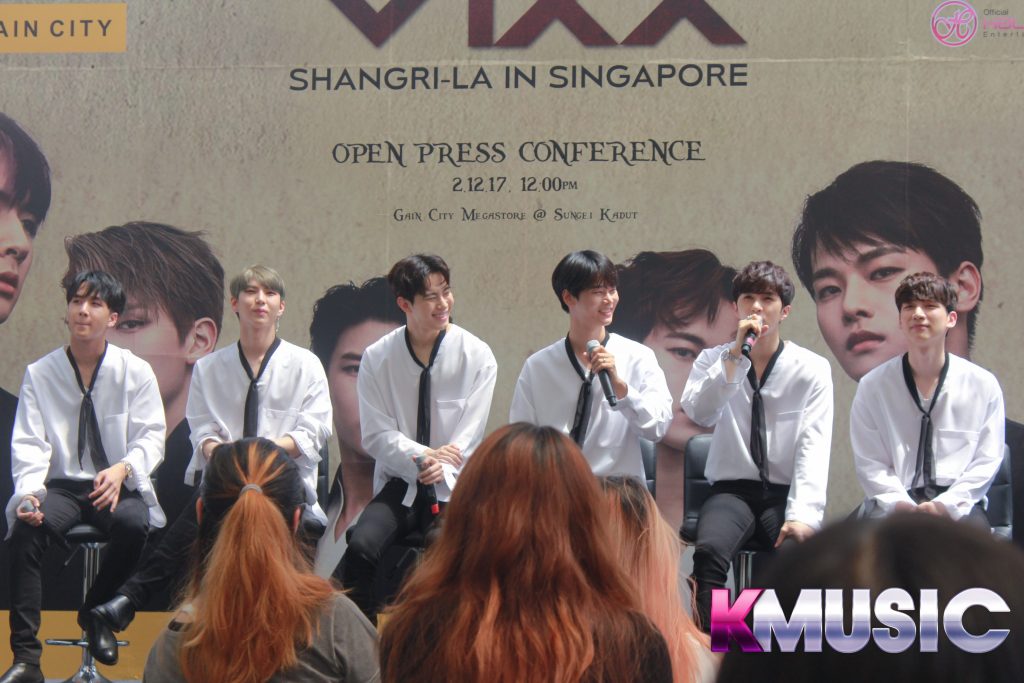 Ravi just released the new mixtape called ‘Boiling Point‘ can you tell us more about the idea and meaning behind the track?

Ravi: I’ve been producing mixtapes for a long time, so ‘Boiling Point‘ shows myself as an artist and tells my own story about how I am as an artist on stage. 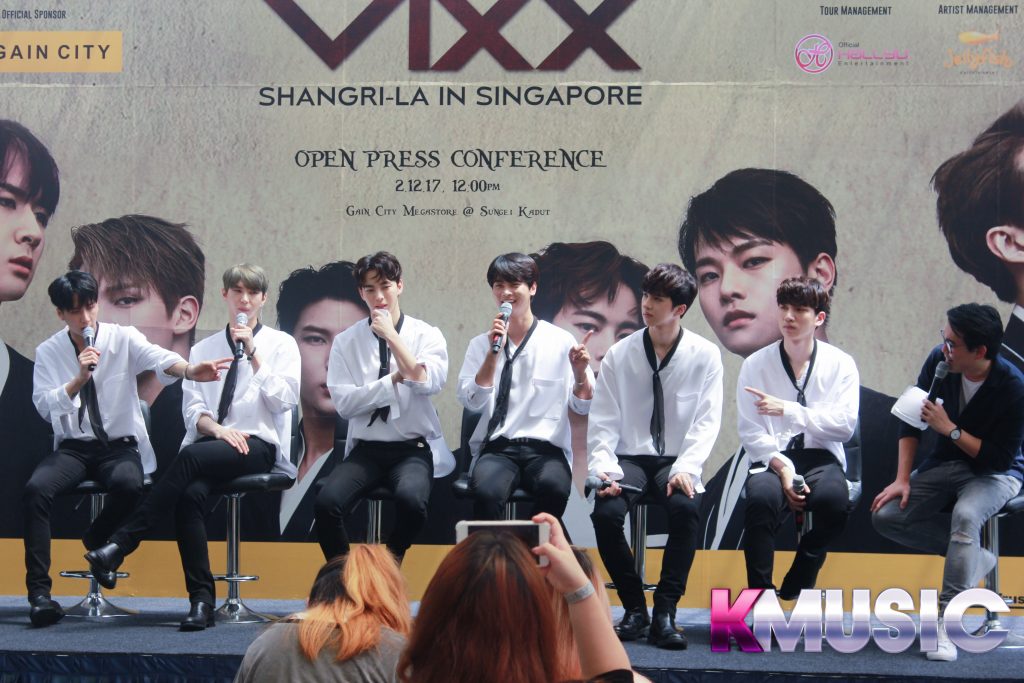 Can you tell us more about how VIXX members are different on stage than off stage? Which member differs the most on stage and off stage?

N: I think that all the members are different because our stage concepts are usually powerful and fantasy -themed so that can be intimidating in real life so all of us are very gentle in real life.

Who is the most mischievous among the VIXX members?

1,2,3 Ken! Ken believes that they chose him because he is the most lovable and adorable.

What is your favourite memory from your previous two trips in Singapore?

“Well, the best memory was of course meeting our Starlights here.” 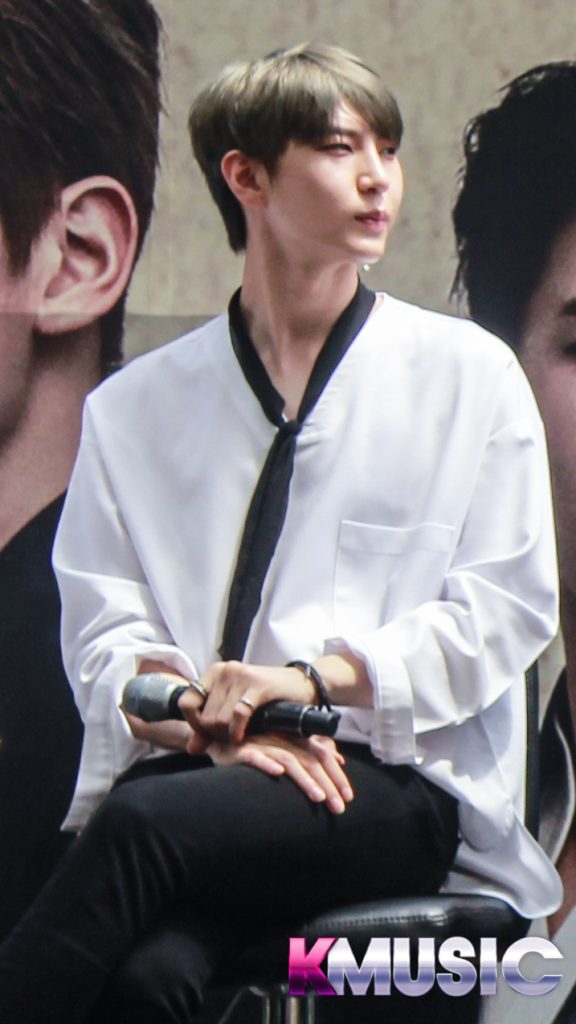 Use one word to describe yourself and explain why?

Ravi: Passion. I think I am a person full of passion
Hongbin: Fun. I enjoy whatever I am doing.
N: Starlight. Starlight is my all.
Ken: Chameleon. It best describes because it is very adorable to changing environment and I am very adaptable to changing environment as well.
Hyuk: Young and youth. It’s obvious that I’m the most youthful of all.
Leo: Age. As you get older you become more mature and more seasoned in what you do so I feel that it describes me well. 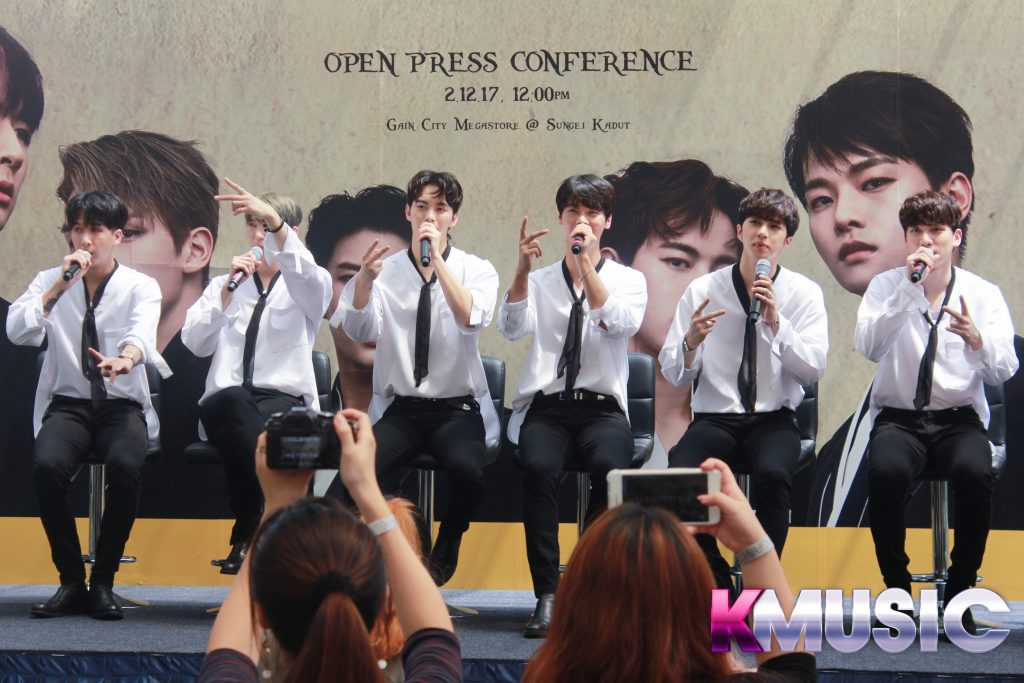 It has been 6 years since your debut and you have recently released the new album, ‘Shangri-La’. What is your favourite track from the album and why?

One of the songs on the album is called ‘1, 2, 3, 4, 5‘ which is composed by member Ravi. It is a great song that everyone should listen to. ‘Blackout‘ is another song that VIXX would like to recommend as it is a powerful and sexy-themed song that you will enjoy.

What are your new year resolutions for 2018?

“To continue doing our music and spreading it to the Starlights all around the world and going on more tours. So please continue giving us your support.” 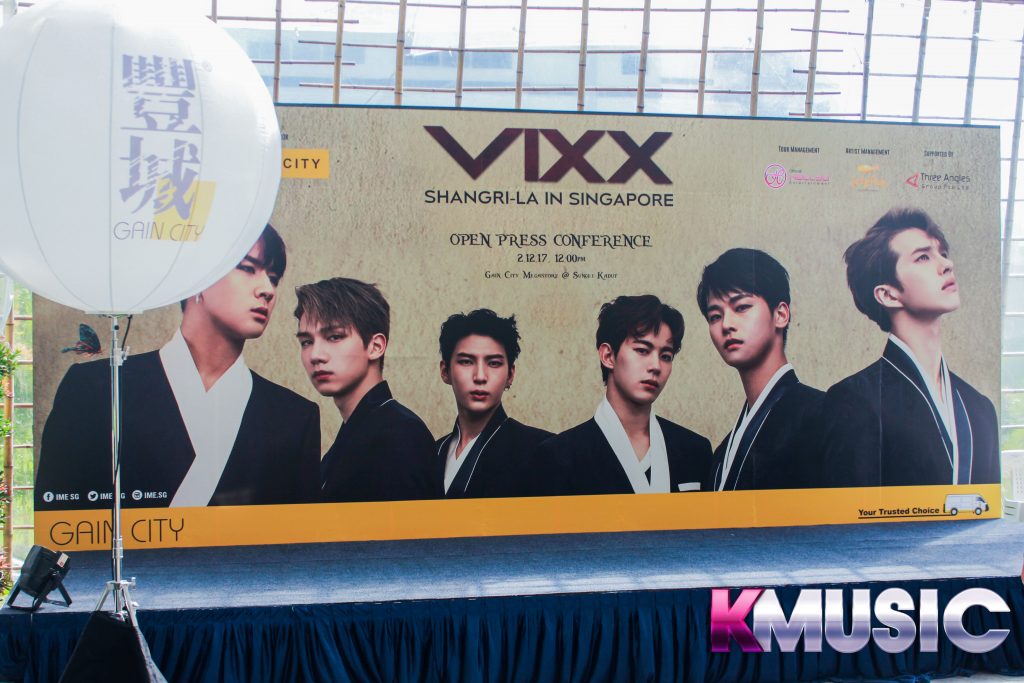 VIXX ended off the press conference by thanking Starlights who attended the open press conference despite the extremely hot weather. They hoped to be back soon to meet all our fans and they will come back with better performances and stages, so they hope that Starlights could look out for them. VIXX also thanked Singaporean Starlights for their warm welcome.

We would like to thank Three Angles Production and IME Singapore for the opportunity to cover the press conference.

Photography by: Juhailla
Article by: Daya
Edited by: Tracey

Scroll for more
Tap
K-EXCLUSIVE: VIXX turns up the heat at their Melbourne ‘SHANGRI-LA’ concert!
[K-EXCLUSIVE] SF9 Bring “My Fantasy” to The Wilbur in Boston
Scroll
Loading Comments...