There are just five days left before KNK return with their 2nd mini album and they’re releasing the remaining teasers before the music video drops. This album was revealed to have 6 tracks, with track two, ‘U‘ being the title track for this comeback. 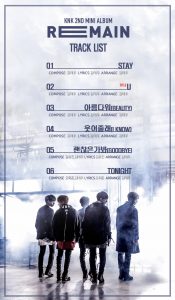 KNK then went on to give fans a taste of whats to come with an album preview, which they released on their V-Live and official YouTube channel. Each song is sure to be a hit with the members showing off their smooth vocals coupled with varying tempo instrumentals. ‘Stay‘ and ‘Tonight‘ promise to be the more addicting songs off this album. Title track ‘U’ is the most up-tempo song here, so it will be quite interesting to see what concept the group is going for in the music video.

Check out the album preview below:

Overall, the mix of slower and mid-tempo songs makes this album a contender for the best KNK album yet. Despite there only being one preceding album. The group definitely carries this contrast of a classic and modern feel at the same time, which is probably why they’ve been rising to popularity faster than most 2016 debut groups.

‘Remain’ will be dropping on November 17th at midnight KST. If you missed the previous Black and White version teasers, make sure to view them here. Stay with Officially Kmusic as we bring you the latest in KNK news!