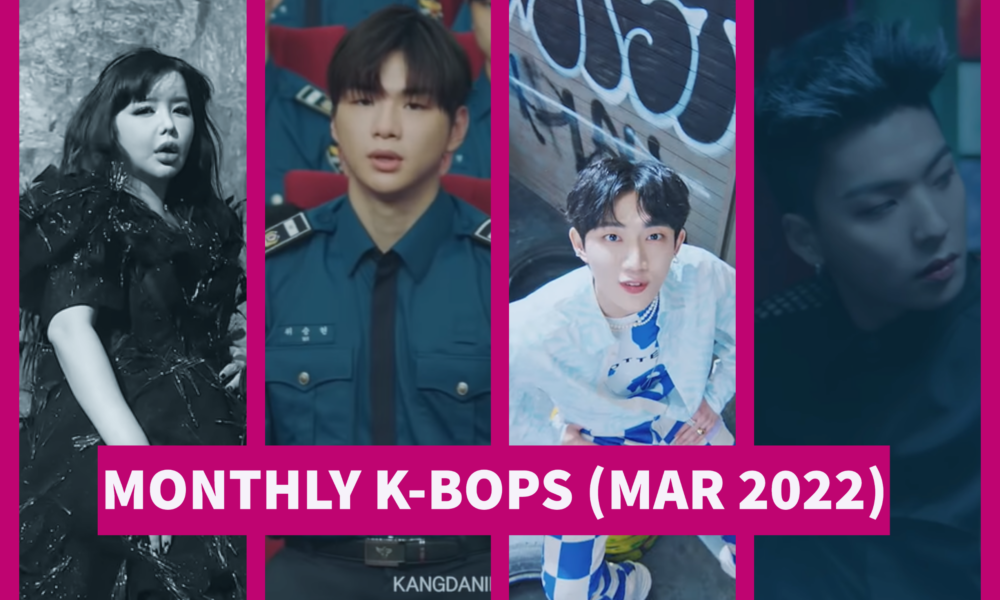 Another 4 weeks, another month…It’s time to look back at some of our favourite K-Pop tracks released within the March month!

The collaboration of a Japanese singer and guitarist Miyavi with KANG DANIEL was on our list ever since first announced. This upbeat song gives off those rushy suspense vibes and goes very well as the OST song for the drama “Rookie Cops”. The song carries a tension with it which does not make us nervous, but rather run further to hide away before the bad guys come and keep quiet while our heart races loudly in the hideout. And it is not only for the amazing voice, but the guitar as well which successfully delivers this theme from the first hit of strings to the last second. In case you are a fan of Daniel, go and watch this drama too because he plays the main role.

‘TEMPEST came red hot with their debut this month. Formed under Yuehua Entertainment (notably managing popular girl group EVERGLOW), the seven members made a colourful splash with their debut single. Going against the grain of dark releases, the boys here opt for a funky quirky vibe. With its full on youthful energy, the track packs enough oomph to get you strongly started on the right foot on your day. 77,000 copies of accumulated sales within the month is definitely no bad news either.

PARK BOM is back and with a song we so craved for! Her voice perfectly describes raw emotions and that is what we get in this duet with Kim Minseok (Melomance). The song starts off with just Bom´s voice to carry the emotions, but slowly builds up to blossom in a perfect combination of her rough and Minseok´s clear voices, creating a ballad which brings tears to your eyes.

Returning after almost exactly a year, D-CRUNCH proved they could tackle the dark concept with a touch of grandiose. The music video is dark but instead of the commonly seen high contrast and shine, the saturation here seems dimmed down. Creating a foggy and moody atmosphere, the relatively softer focuses add a feeling of mystery to the video and track. It’s as if the track is trying to power above the the mood set by its visual accompaniment. This is especially the case with the choir pre-chorus sounding like they come from the depths below.

What were your favourite K-Pops from March? Let us know in the comments below!

Written by Derek and Terry