There were many mixed feelings for the ending of the historical drama ‘Scarlet Heart: Ryeo,‘ but almost everyone can agree that Nam Joo Hyuk‘s character was a favorite. Fans of the show are getting an extra special treat this year as Joo Hyuk’s on screen brother and on screen fiancé join him in the hit show ‘Weightlifting Fairy Kim Bok Joo‘. 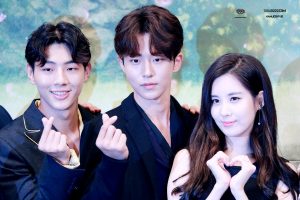 Actor Jisoo and SNSD‘s Seohyun are making cameos to support their Joo Hyuk. Though their roles have been kept a secret, the production team has assured fans that their roles are very important. Jisoo will be making his appearance on the Wednesday episode (episode 11) while Seohyun will make her cameo on Thursday (episode 12).

Jisoo and Nam Joo Hyuk have been known for their friendship, with the pair appearing on the hit reality show ‘Celebrity Bromance.‘ So, it’s no surprise that he’s making a cameo. Fans will sure be in for a treat with this mini reunion!

Keep up with all the latest news in Kdrama and Kpop with Officially KMusic!