Is It Again A Separation? ‘Descendants Of The Sun’ Episode 5!

Is It Again A Separation? ‘Descendants Of The Sun’ Episode 5!

‘Descendants Of The Sun’ ends another chapter. The love story of Captain Yoo Shi Jin and the doctor Kang Mo Yeon, begins to bloom fresh.

Rain falls outside like it’s the last rain ever. Captain Shi Jin confesses his love, stealing a kiss from Mo Yeon, making her heart flutter, tasting the wine that’s banned for a soldier on duty, from her lips. Doctor Mo Yeon, frozen for a moment with this surprise kiss, drifts into more confusion and finds her way out before the moment gets irresistible. 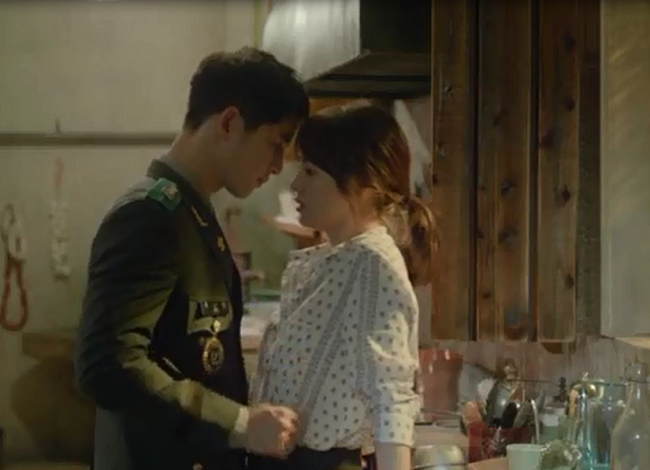 The very next day Doctor Mo Yeon and the medical team is at the power plant site. They get to meet the chief manager Jin Young Su who has an awkward personality and is ignored by everyone. Mo Yeon gets a call informing her about the child who has been treated by them. The child has been identified as Blackey and has run away, leaving a drawing which most likely to say he went home. It’s a must that they find the child because his medication is not over yet. During this conversation Captain Shi Jin arrives. His arrival takes Mo Yeon back to the previous night. Shi Jin informs it’s a distance of a quarter day on foot to the village, where they think the child went to. Mo Yeon decides to travel all that way with him.

Whilst on the way, Shi Jin tries to get into a conversation with Mo Yeon to find out her feelings about what happened between them. Mo Yeon doesn’t want to talk about it until she settles her mind. 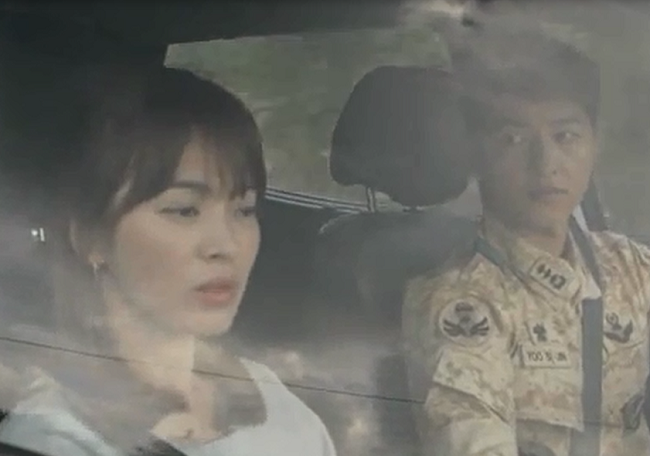 They finally visit the boy and his home, prescribe the necessary medicine, and return to the town. On the way they stop by the restaurant where Major Dae Yong and Shi Jin frequently used to visit. Mo Yeon takes her turn to treat Shi Jin with a meal, and she questions him as to why he became a soldier. His answer is comprehensive, yet complicated as usual.

Shi Jin goes out of the restaurant first. His eyes catch a familiar person. Previously, a young man claimed to be an UN member was arrested in the mountains delivering weapons after an accident happened to their vehicle. He was not much surprised to see him there, as it was obvious he was an influential person. At the same moment, Mo Yeon comes out of the restaurant after paying the bill. Shi Jin asks her to borrow a car from Dr. Daniel who resides in in the town and whose wife runs a store.

Shi Jin walks up to the man, pointing his gun at him. The man states that it is a wrongdoing to point a gun at an unarmed civilian, being a peace keeper. Shi Jin shoots their vehicle’s tired so that the man and the other who stands with him takes out their guns, and claims objection for the young man’s statement. Shi Jin’s action brings out a surprise for him. A man in a suit, he knew some time ago, comes out from the building near with another set of armed men. 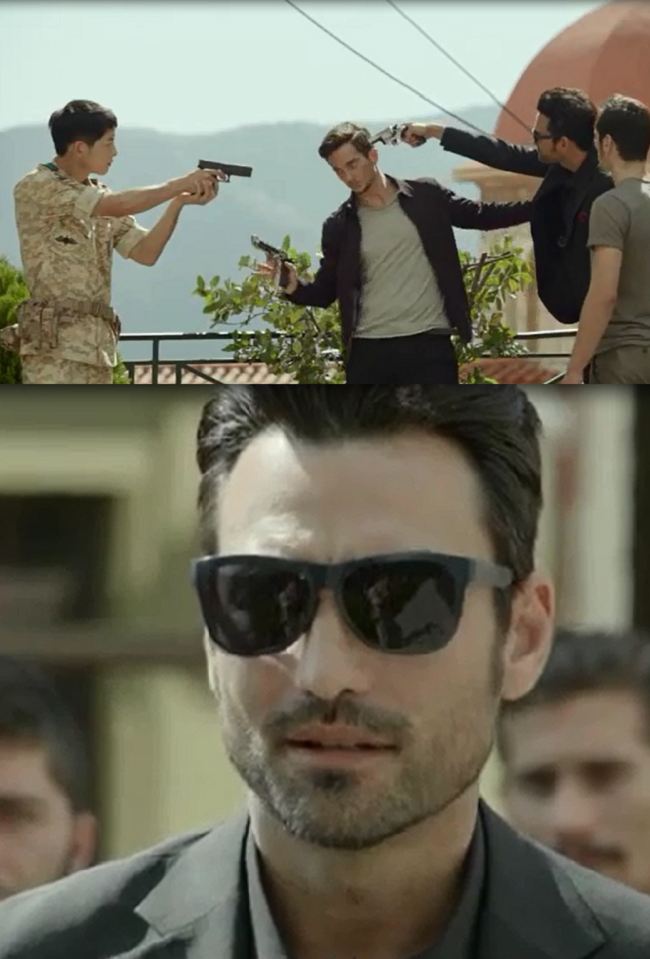 Captain Argus! He was a captain of another team who was once saved by Shi Ji, at a mission. He is no longer the captain that Shi Jin used to know. He is involved in a gang who runs illegal business in the town who has surrendered himself for money. He warns Shi Jin to keep away from involving in their matters, and Shi Jin responses in the same way, torching clues for an unforeseen fire between the two parties.

Mo Yeon who has a long running curiosity to know what exactly is Shi Jin’s role in the uniform, asks Daniel about it. He reveals a story from Shi Jin’s past, to Mo Yeon, which sinks her deep into thoughts about Shi Jin.

She leaves in a jeep borrowed from Daniel. She nearly saves herself from knocking on a lorry that came towards her vehicle, but slips off from the road and ends up hanging on a cliff. She immediately contacts Shi Jin who appears in the blink of an eye to save her.

The only option for survival is being dropped into the water which is deep and calm, way below the mountain. And it happens that way, despite Mo Yeon’s fear. Both survived, but Mo Yeon is going through long term shock which makes her panicked over the entire incident. Shi Jin drives her back to the camp. Shi Jin covers her with his jacket teasing her seductively about how she looks in the wet clothes. 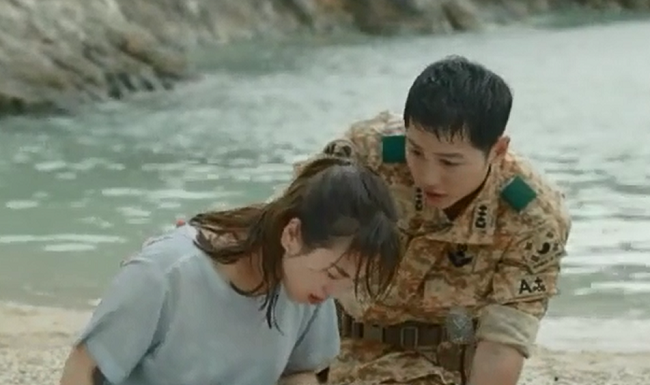 On the other side, the chief manager of the solar power plant site is having connections to Captain Argus’s illegal business. He supplies diamonds to him and gets money. At this deal his driver is getting killed too.

The same night Shi Jin and Mo Yeon are having a coffee. Mo Yeon asks about what she heard from Daniel. Although the memory he had hurting him for losing his senior, yet kept him satisfied for the fact he saved a person, turned into a regretful one that afternoon, knowing he saved a person who shouldn’t have been saved, Shi Jin reveals it to Mo Yeon in a quiet wa 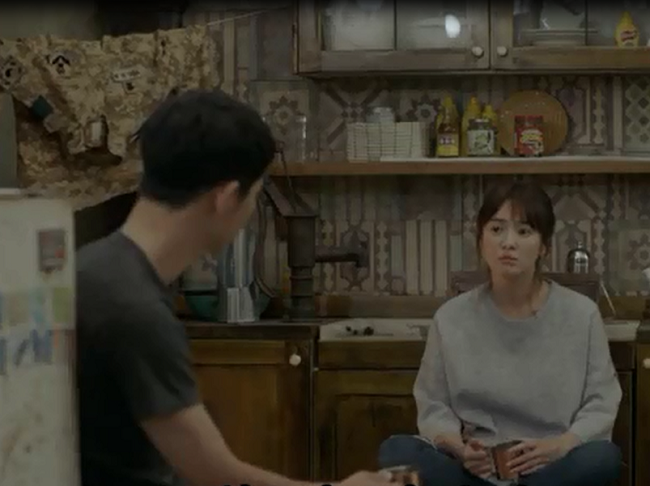 The next day the vehicle, which is dropped to the water with Shi Jin and Mo Yeon, is recovered. But it is in a terrible condition. Daniel is willing to try anything to fix it back to the way it was. Also, Shi Jin figures out using a walkie talkie is more practical than a mobile phone, because of the unstable network connection, and gets a stock from the store.

Myun Joo is assigned to the the camp as an Army doctor. She reports to Shi Jin, whilst Mo Yeon and Shi Jin are having a blissful conversation. Mo Yeon is not in good terms with Myun Joo. She walks out leaving Shi Jin and Myun Joo, avoiding her.

Back in the base Major Dae Yong is doing training for the soldiers. He shows off his skills and brave personality whilst training the team. During this work, the commander of the special forces calls Dae Yong to report to him. He discloses about a transfer of Captain Shi Jin to the Ministry Of Defense. Dae Yong respects the commander’s decision.

Dae Yong’s heart is heavy too. He is weighed by Myun Joo’s love for him. And a letter sent to him is keeping him grounded. It looks like Dae Yong is trapped in love for Myun Joo, which he thinks is impossible no matter what. 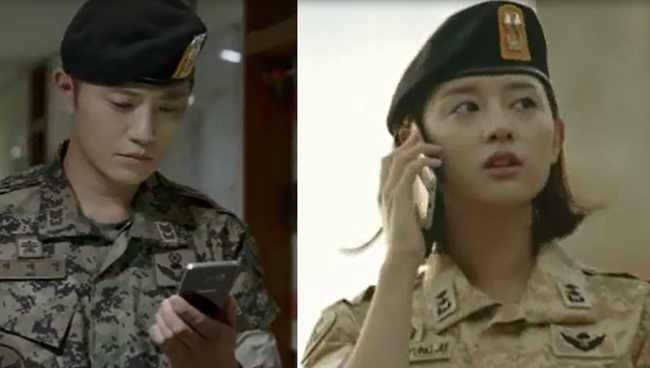 Out in the camp in Urk, there comes another day where things get twisted. Everyone is preparing for the last day of Captain Shi Jin in the camp. Not being aware of what is to happen with Shi Jin makes Mo Yeon angry.That night, Mo Yeon calls for an explanation for not telling her about it. After he submits his apology and the explanation to her, he takes things back to the other night.

“About the kiss, should I apologize or should I confess my love?” 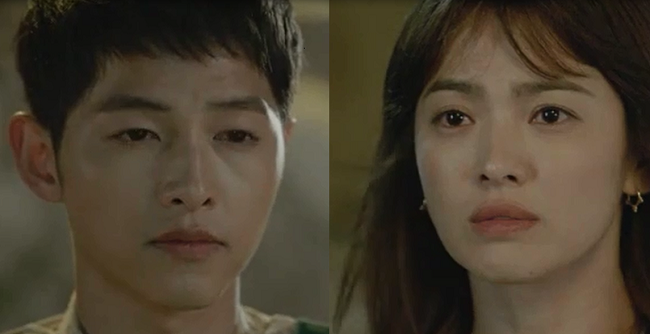 Questions remain as it is until the next episode is released. What do you think, is it a new beginning or another separation for these lovers? Let us know in the comments below.

‘Descendant’s Of The Sun’ is a 16 episode KBS2 drama, which airs on every Wednesday and Thursday at 22:00 (KST) gaining endless popularity. A love story between a Captain of Special Forces, named Yoo Shi Jin, casted by Song Joong Ki and a doctor, named Kang Mo Yeon, casted by Song Hye Kyo, is been written as the storyline of the drama by Kim Eun Suk and Kim Won Suk.

Have you missed the first set of episodes? Click here to read about what happened up until now.

Stay with Officially KMusic to know what’s going to happen next. Also Officially Kmusic brings you all the latest happening from the Korean entertainment world, stay tuned.

Scroll for more
Tap
Red Velvet Tease With A Series of Images On Instagram For ‘The Velvet’
‘Produce 101’ Special Project Group Is Already In High Demand Before Finals
Scroll
Loading Comments...