In celebration, they will hold a two-day concert titled ‘Hero’, at Olympic Park Gymnastic Gymnasium (First Gymnasium) in Seoul on 26th and 27th March. 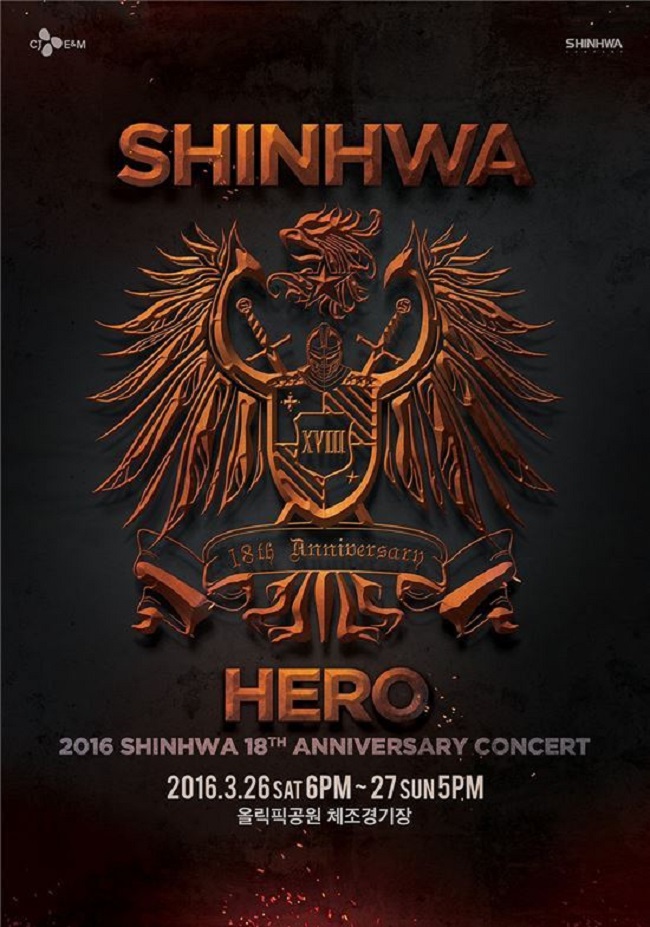 Eric Mun, Lee Min Woo, Kim Dong Wan, Shin Hye Sung, Jun Jin and Andy Lee, debuted as Shinhwa on 24th March 1998 under SM Entertainment, with the single, ‘Resolver’. Shinhwa, climbed up the ladder of success triumphantly; by 2002 was recorded as the longest running Korean Pop boy group, with the release of its sixth album, ‘Wedding’, of which the title track was ‘Your Wedding’. Soon they came to see the end of their contract with the SM Entertainment, which they did not want to renew, and signed a contract with Good Entertainment.

Until 2004, the new contract did not begin. Therefore, the members initiated their solo activities. Returning as a group under Good Entertainment, with the album ‘Brand New’, the group showed off a total different face, topping up charts.

In 2007, the group was on hiatus again expanding their solo activities. Since 2008 members had to go through their mandatory military enlistment.

2011 was another year of history for both the group and the K-Pop industry. Shinhwa became the first group to own its own company with the establishment of Shinhwa Company, a joint venture agency where Eric and Min Woo were Co-CEOs, and the rest of the members are shareholders.

In 2012, they returned with the album ‘The Return’ of which the lead track was ‘Venus’, which was followed by the concert ‘2012 Shinhwa Grand Tour In Seoul: The Return’, held at Olympics Gymnastic Arena on 24th and 25th March, celebrating their 14th anniversary. The concerts expanded to Japan, China, Taiwan and Singapore.

The group made a comeback as six members along with Andy’s return, who continued to be on hiatus since 2013, with the album ‘We’, which was their the 12th full length album. The title track of the album was ‘Target, and it contained nine other songs with inclusive of a pre-released track titled, ‘Memory’.

Holding a great past behind, Shinhwa is at its 18th year, brighter and stronger. They celebrated their 17th anniversary last year with a sold out concert and this time again it is a highly anticipated one.

Let us know how close you are to Shinhwa and what you expect from them at their anniversary. Feel free to comment what you wanna tell them below.

Stay tuned to Officially KMusic to hear what’s latest in the K-Pop scene.

Scroll for more
Tap
Park Hae Jin Is Not Happy About ‘Cheese In The Trap’!
EXO’s Xiumin Talks About Working With AOA’s Jimin on Her Track ‘Call You Bae’
Scroll
Loading Comments...