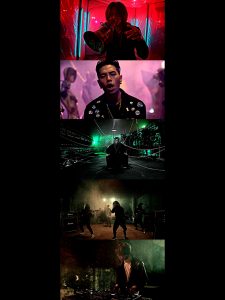 The new track titled ‘Nightmare’ was released on October 28th and features Rock singer, Yoon Do Hyun (윤도현), South Korean rappers, Reddy, and G2, heavy metal band, INLAYER, and SM Rookie, JOHNNY. The music video itself is dark and definitely has a “nightmarish” feel. The song has heavy metal/rock sounds but the rap seems to fit perfectly. I’m also feeling Johnny’s DJ skills throughout the video. Overall, it’s very different in comparison to the previous SM STATION releases. But it is a great song to get in the spirit of Halloween!