After the overwhelming amount of interest from all around Australia, The Academy is pleased to reveal that they will be holding national auditions for their K-Kpop Boot Camp in Sydney, which will also be filmed for an online reality production!

Auditions – which will determine your eligibility for the Boot Camp’s Master Class program in Spring – will be held in at least five cities around Australia. Locations will be decided on interest: a minimum of 50 sign-ups* will ensure the auditions will come to your capital city!

The auditions will be judged by the trainers of the K-Pop Boot Camp, you can either audition as a solo act or in a group (maximum of five members). The Top 40 participants from the auditions will then be invited to join the K-Pop Boot Camp 2016 Master Class**. One lucky participant will be given a wild card position voted on by public viewers, who will win a complimentary 5-day Boot Camp Master Class pass (eligible for solo auditions only).

The resulting 41 performers will then participate in an intense, week-long training camp with top K-Pop entertainment agencies’ trainers, joining us in Sydney all the way from Korea.

However, for the participants who don’t make it to the Master Class, fear not! Their K-Pop dreams are not yet over! Participants will be given the option of participating in The Academy’s Rookie Class**, a week-long intensive training Boot Camp with top K-Pop entertainment agencies’ trainers from Korea that will happen alongside the Master Class. More details to come in May!

All Master Class participants will go on to perform at a Final Showcase for family, friends, guests, sponsors and may receive our trainers’ recommendation for scouting by a Korean entertainment agency. If you liked Produce 101, stay tuned! The Master Class Boot Camp will also be filmed for a YouTube online reality series – helping bring the experience of the top 41 performers not only to the rest of Australia, but around the world!

Subscribe to KMUSIC and Hello Asia for more details including dates and costs! But for now, make sure you express your interest so The Academy knows where to bring the K-Pop Boot Camp auditions! 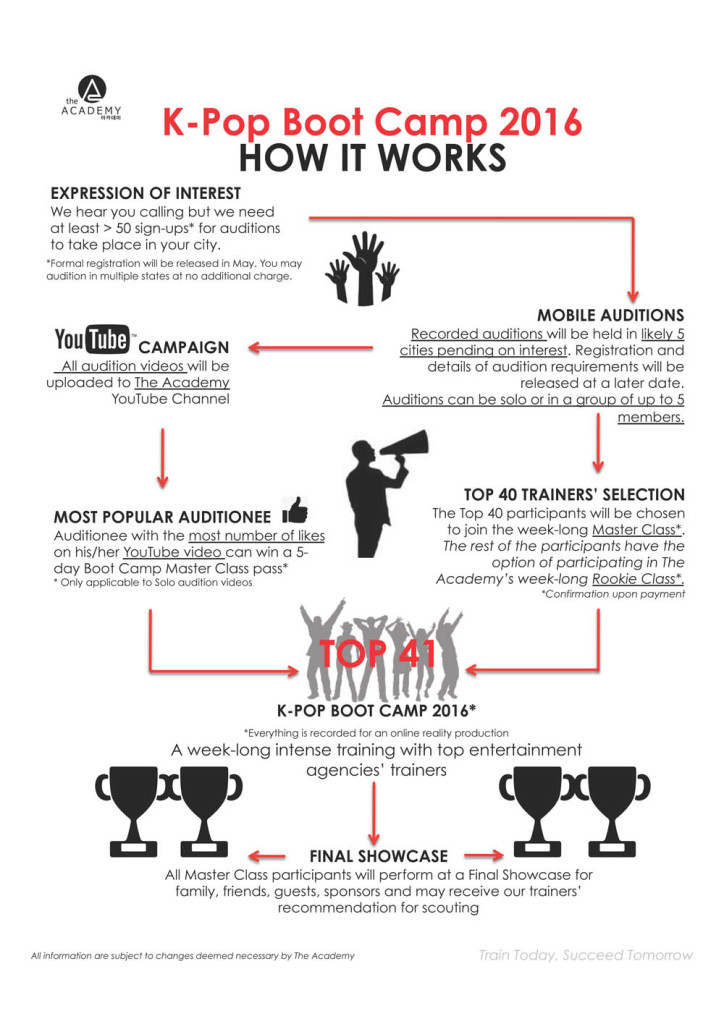 *Formal registration details will be released in May, with those who fill out the expression of interest form the first to find out the details. A one off administration fee will apply to be a part of the auditions. You may audition in multiple cities at no additional charge.

**Fees will apply. Costings will be revealed in May.