UKISS Won For The First Time On Music Show Since Debut! #UKISS1stWIN

UKISS Won For The First Time On Music Show Since Debut! #UKISS1stWIN

Today is really historic day for the members of UKISS and KISSME‘s. The boys won for the first time since their debut on August 28th 2008.

U-KISS received the most votes during the SBS MTV’s “The Show – China Choice” special that was held in China on February 17, winning over 4Minute and INFINITE H.

The voting results were announced on March 3, and U-KISS gave their thank-you speech on the weekly broadcast of “The Show” later that evening.

Finally the day has come and all the members showed appreciation and thankful heart upon this very first win. leader Soohyun said: “It is very touching to win first place for the first time since our debut eight years ago. I am very grateful to our hard-working members, and thank you so much to our fans, who always support us. We will go anywhere in the world to present our loving fans with good music and performances, so please show us a lot of support.”

Check out the video.

I can’t explain how happy I am right now. UKISS is one of those boygroups who are really so good but don’t gain a lot of attention domestically, while overseas they are really popular. I never understood why is that, because these boys are everything that a fan could ask for, beautiful inside and out, humble, hardworking and always have smile on their faces with addition of great concepts and songs.

Check out the tweets from the members: 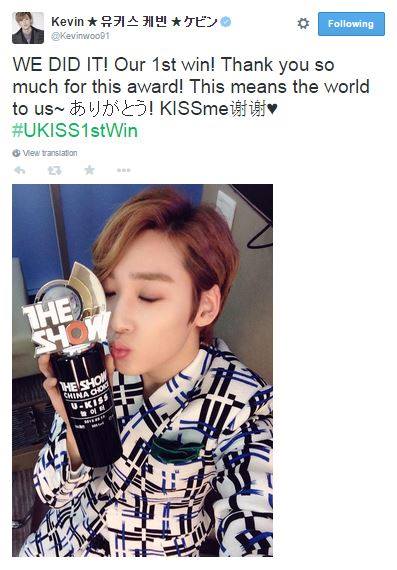 Kiseop tweeted; ““We got first place in 8 years!!!>_<thank you for you love…..
from now on we will become a hard-working U-KISS.”

Kevin: “KISSME!! Can’t believe this day has finally arrived! We were all shocked but also very thrilled at the same time when we first heard the news. Thank you for never giving up and ALWAYS being by our side! This award goes out to our fans and everyone who believed in us 🙂 WE LOVE YOU”

UKISS currently ended their promotions in Korea with “Playground” and preparing for the next release in Japan.

We here at KMusic wish all the best to the members and a lot of winning in the future!

Officially KMusic brings you all the news from KPop, so stay tuned with us.