February 10th was the 7th anniversary of JYP‘s first female group, Wonder Girls. They debuted 7 years ago with their title song “Irony” on Music Core. Since then the group has had lots of formation changes including the leave of Hyuna and Sunmi.

To celebrate this date, Yeeun wrote on Twitter “7 years..Wow, it really came. Even though it’s only the 9th where I am! To my members who believed in each other and stood together the past seven years and our Wonderfuls! I love you.” 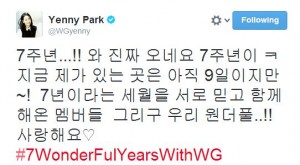 Let’s all wish Wonder Girls a happy anniversary and hope they continue to shine for many years!