Who will debut from Happy Face Entertainment’s HNB trainee group? Fans get to decide!

Who will debut from Happy Face Entertainment’s HNB trainee group? Fans get to decide!

Happy Face Entertainment has announced a unique plan to decide which of their trainees will debut in the agency’s first boyband!

The trainees in the running are part of HNB – Happy Face Entertainment’s male trainee group. It includes some familiar faces, such as Woo Jin Young, who nearly debuted with the now defunct ‘MIX NINE’ band and was ranked number 1 trainee, and Park Woo Dam who appeared on ‘Produce 101.’

The HNB debut project will involve fans – in fact, fans will get to choose the members they want to see debut through special fan meetings, ‘HNB FOR FAN MEETING.’ 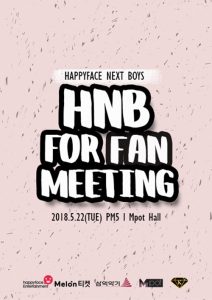 During the fan meet, all trainees up for the running will perform, and votes will take place twice a month!

The first ‘HNB FOR FAN MEETING’ will take place on May 22 at 5pm KST at Mpot Hall in Seoul. The trainees have already released a special track ‘I’m Your Light’ so give it a listen and let us know who you think has the chops to make it in Happy Face Entertainment’s boyband!

“I’M YOUR LIGHT” BY HNB TRAINEES