Jung Seung Hwan is gearing up for the release of his first full album ‘And Spring’!

‘The Snowman‘ is just one of the ten tracks fans can look forward to on Jung Seung Hwan‘s upcoming album ‘And Spring‘. The album boasts a highly impressive range of contributors, with IU, Yoo Hee Yeol, and John Park all taking part in the creation at least one track. You can check out the full tracklist for ‘And Spring‘ below! 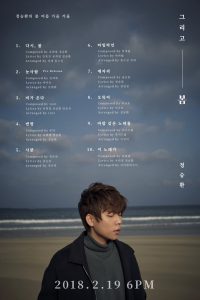 Jung Seung Hwan‘s first full-length album ‘And Spring‘ will be released at 6PM KST on February 19!