B.A.P comes back with another hit with their latest album, ‘Noir’. Once again they have reclaimed their title as K-POP Act with most No.1s on the Billboard’s World Album! 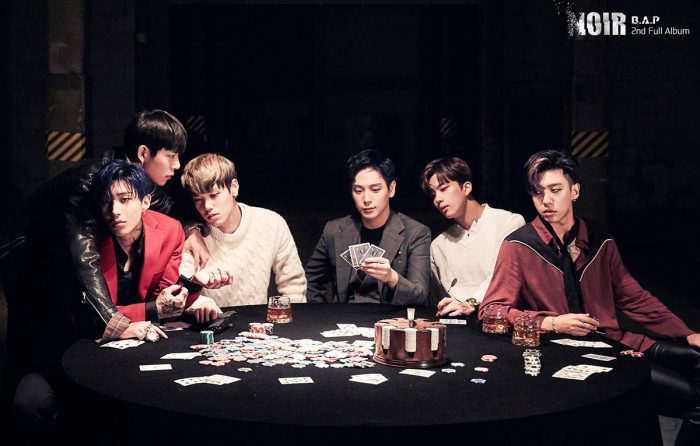 The boys made their comeback with a second, full-length album, which released on November 7.  Going back to a darker, edgier concept, B.A.P are rocking the charts. In this week alone, the group’s full-length album has sold around 1,000 copies on the market. The music video of the title track, ‘Skydive’ has over 700,000 views on YouTube.

This isn’t the first time B.A.P has made it on to the Billboard’s World Album chart. ‘First Sensibility’, in 2014, too marked a top spot on the World Album chart list. ‘One Shot’ and ‘Badman’ also dominated the charts, back in March 2013, and August 2013. Thanks to their latest comeback, B.A.P now hold the record for the Korean artists with the most No.1s on the Billboard charts. Not only that, but B.A.P have been ranked on other music charts also, winning many music shows on a global scale. Currently, ‘Noir’ is ranking in Japan’s Oricon music chart at 39.

Since their debut, B.A.P has marked their name in the music industry (K-pop and internationally), and have gained the top spot on World Album chart for three of their albums. In addition, the boys received the ‘Best Korean Act’ award in 2016, MTV EMAs. B.A.P are well recognised for their diversity. Their music has always been versatile, ranging from hip-hop, to R&B, and now even a little Gospel-Rock. ‘Noir’ is just another proof of their talent and versatility, exploring a mix of different music genres: Sensual, Funk, and of course Rap.

B.A.P continues to leave their fans and the music industry with a powerful impression with each album; continuously keeping fans eagerly anticipating their next comeback! Congratulations to B.A.P, and all their hard work!

Stay tuned to Officially KMusic for more news on B.A.P and their activities!