Officially Kmusic would like to wish BTS’s Rap Monster, AKMU’s Chanhyuk and Beenzino all a very happy birthday! 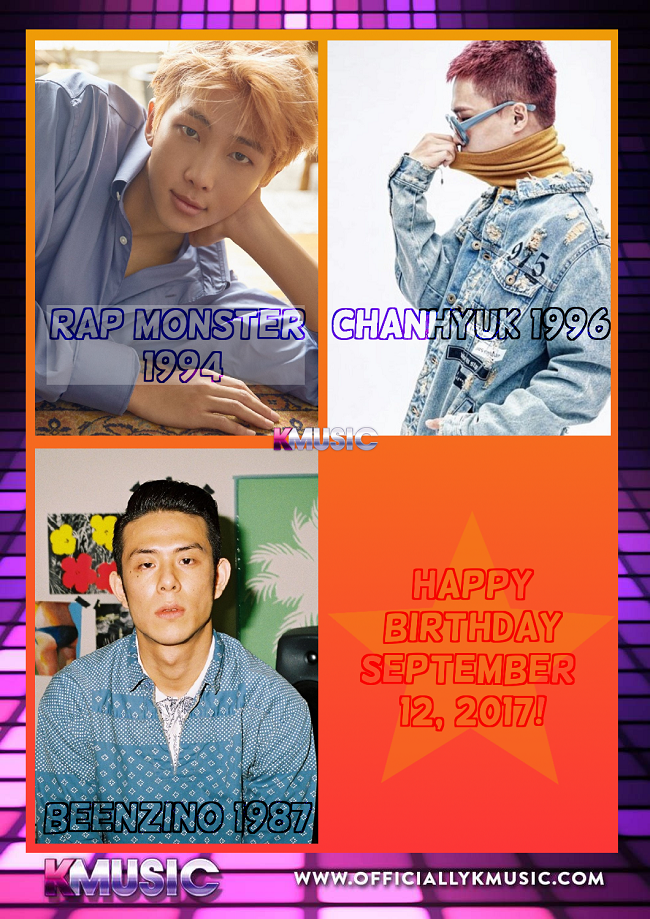 Things to know about Rap Monster:

He used to be an underground rapper and was found by Sleepy who recommended him to BigHit.

He loves Ryan from KakaoTalk a Korean group text app.

He has a dog he named RAP MON.

He was the first to join BTS.

He is the main rapper and leader of the group.

He did an collaboration with Wale earlier this year.

BTS is about to make their comeback with LOVE YOURSELF: Her to which they did a collaboration piece with The Chainsmokers thanks to meeting them at the BBMAs back in May in Los Vegas.

He has a high IQ of 148; he’s good friends with Jackson of GOT7, and he taught himself English by studying in New Zealand and watching FRIENDS.

Things to know about Chanhyuk:

He is the oldest of the brother/sister duo.

He writes all of their songs.

He says he might enter the military for his mandatory enlistment in late 2018 since all of his friends have already completed theirs.

Things to know about Beenzino:

He is currently serving in the military for his mandatory service.

Scroll for more
Tap
Hyorin to start out on her own!
Birthdays: September 14, 2017!
Scroll
Loading Comments...