BTS Breaks Records With ‘Spring Day’ and Their New Album

BTS Breaks Records With ‘Spring Day’ and Their New Album

When BTS makes a comeback, they inevitably shatter records, including some of their own. While ‘Spring Day‘ has been breaking view counts and climbing charts, their previous album, ‘Wings‘, made a new record of its own.

In the weeks before their comeback, BTS broke their own Gaon Chart for Album Sales record with ‘Wings’. The group held the title of Best-selling Album of 2016 with a sale of 710 000 copies. Now, they’ve not only beaten their record with a sale of 773,356 as of January 2017, but they also hold the record of best-selling album in the history of the Gaon Chart.

‘Spring Day’ then went on to achieve an all-kill after its release on February 23th. The track placed first on eight charts; Melon, Mnet, Monkey3, Bugs, Genie, olleh, Soribada, and Naver Music. ‘Not Today‘ followed in second place on the same eight charts. 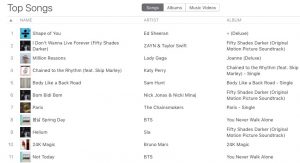 ‘Spring Day’ then topped the U.S iTunes chart as well. With this, BTS also achieved something new, and that is being the first Kpop group to make it into the Top 10 of that chart. The last K-pop artist to achieve this feat was PSY, with ‘Gangnam Style‘ in 2012.

In music video news, BTS broke yet another record by becoming the fastest Kpop group to reach 10 million views, with ‘Spring Day’. The group beat out Twice’s ‘TT’, with a record of 26 hours and 40 minutes. Twice previously held the record with 40 hours and 31 minutes. BTS also inevitably shattered their own record of most music video views within 24 hours, that they previously held with ‘Blood, Sweat and Tears‘. ‘Spring Day’ is also currently approaching 20 million views.

This comeback has certainly been a highly successful one for BTS!