MONSTA X have announced the track list for their much anticipated ‘Shine Forever’ album.

The album will be a repackaged version of their first album, ‘Beautiful’, and will feature 12 tracks, with ‘Shine Forever’ being the titular song.

Teaser images featuring MONSTA X members have been released in the lead up to the repackaged album’s debut.

You can view our article featuring their last set of teaser images here!

‘Shine Forever’ is set to be released on June 19, and will coincide with the boys’ first world tour, ‘Beautiful in Seoul’ which kicks off on June 17. 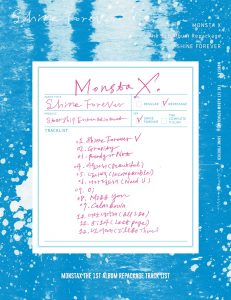 Are you excited for MONSTA X’s repackaged album?