Heize has finally dropped the music video for her title track, ‘Don’t Know You‘. In the music video, it features the one and only SHINee‘s Onew! The two’s chemistry is truly remarkable so check it out below!

Heize has done an incredible job with this track. Her voice is so soothing to listen to and it fits amazingly well with the beat. The melody for this track is quite groovy and it really has beats that will lure you in. She herself looks quite beautiful and cute at the same time! She is so talented in her singing and rapping ability. 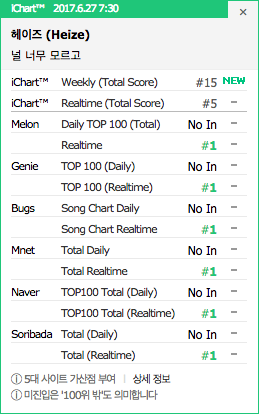 The lyrics itself is quite apologetic yet it features her been violent to the teddy bear! The bear is so cute and really brings the adorable element to the music video. She had also received an all-kill with this track, slaying all six major music charts! How amazing is that? So, check the song out above! What did you think about the song? Let us know in the comments below!

Meanwhile, Heize will be heading to Australia for Olive Tree Entertainment‘s Rapbeat Show! So, check out the list of what kind of tracks we want her to perform at Rapbeat!

Scroll for more
Tap
G.Soul is all about the ‘Tequila’ with Hoody in his latest MV!
UP10TION reveal the tracklist for ‘Stardom’!
Scroll