Speaking publicly for the first time since Hoya‘s departure, INFINITE let fans know about their plans for the rest of the year

On September 14 INFINITE held a surprise V Live session, the group’s first since the shock departure of main dancer Hoya.

The V Live broadcast saw the six remaining members, all in matching white shirts and black pants, being their usual loud, cheerful selves. The group also used their surprise broadcast to hint at a comeback in the near future! They said, “We wore matching clothes today. Our album didn’t come out, but we can’t just sit here and do nothing. We’re going to start working on it soon. We’ll show you guys!” 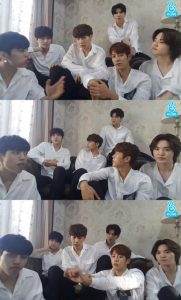 INFINITE originally announced that they would be making a comeback in May this year, but due to prolonged contract discussions and ultimately Hoya‘s departure, this comeback was postponed indefinitely. As a result, the members have had an extended break.

As the group’s broadcast occurred in the lead up to the Chuseok holiday, INFINITE also took the time to wish their fans well for the holiday season. The group then revealed their individual plans for the Chuseok period, with members saying things such as “I’m going on a trip with my family”, “I’ll probably be filming something”, “I’m going to keep recording”, and “I’m going to look for persimmons”.

INFINITE closed the broadcast by asking fans to take care of themselves, and said “We are planning to meet our fans with a lot of new content. If you send us a lot of ideas, we’ll look over them! Please support us in our individual activities until then!”

Whilst Inspirits must still be reeling from Hoya‘s departure from the group, INFINITE‘s promise of new music before the end of the year is definitely something to look forward to!