K-EXCLUSIVE: Kiss The Rain with YIRUMA in Melbourne 2016

K-EXCLUSIVE: Kiss The Rain with YIRUMA in Melbourne 2016

Kiss The Rain is the title song of YIRUMA‘s second tour in Australia, where there are three tour stops in Adelaide, Melbourne and Sydney. Coincidentally on the night of YIRUMA‘s concert in both Adelaide and Melbourne it was raining, which set the mood as the audience made their way to The Plenary.

The concert was divided into two parts with a 20 minute intermission during the middle of the concert. YIRUMA started the concert off with a conjoined performance of  Maybe and Love. YIRUMA then greeted the audience in English. He explained that during his concerts he will often play two pieces of his composition together and improvising, otherwise it would be the same as listening to his CDs, which everyone can do at home. YIRUMA then stated that this event is not a concert, and would like everyone to think of it as a journey or trip where you can revisit your memories. His music will only be the background music which initiates that journey.

YIRUMA then explained that the next pair of compositions that he will performing is Love Me. YIRUMA humorously explained that he named this piece after some ice cream he had. The name of the ice cream he had was called ‘Love Me’, but it didn’t taste nice at all which is similar to the feelings of love sometimes. The second composition that he will be playing immediately after Love Me is Fairy Tale, which was from the original soundtrack of the Korean drama Secret Garden. 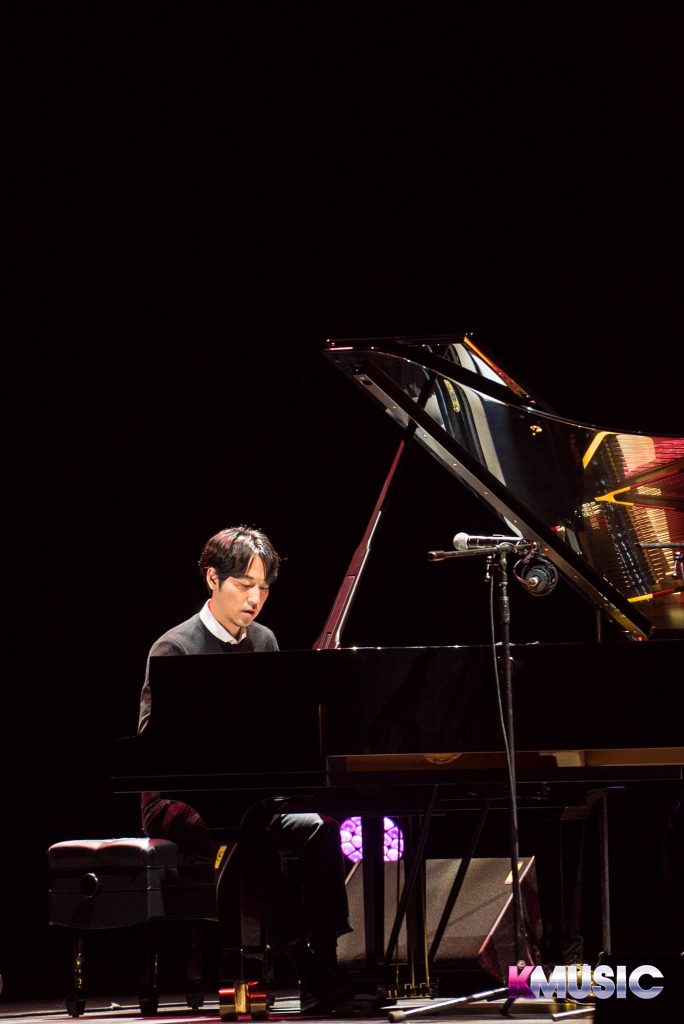 Other compositions that YIRUMA performed during the concert included  Chaconne which is described as a slow dance in the garden and To You. YIRUMA stated that majority of his songs were written during his early 20s, which includes Indigo. Indigo was inspired by the indigo blue night sky, which prompted to YIRUMA to question ‘whether there will be a tomorrow?’. The song reflected philosophical nature of the thoughts perfectly.

The next song performed by YIRUMA  called Loanna is the name of his 8 year daughter. The story behind the composing the song is heart-wrenching. YIRUMA explained that he wrote this song as a gift to his daughter out of sadness, as he was unable to witness the birth of Loanna as he was serving his military service with the Korean Navy. Thus he wrote this song for her and plans to play it at her wedding.

For the next song called Falling, YIRUMA collaborated with cellist Jung Min Kim. Followed by Love Hearts which is from a Japanese drama and a rearranged version of When Love Falls, which is a song from the popular melodrama Winter Sonata.

YIRUMA continued to collaborate with Jung Min Kim well into the second part of the concert, where they performed songs such as Blind Improvisation, Destiny of Love, Blind Film and Nocturne. As well as the title song of the concert tour Kiss The Rain. YIRUMA stated that his dream is to compose songs which are easy to play, so that everyone can share his joy of playing music. 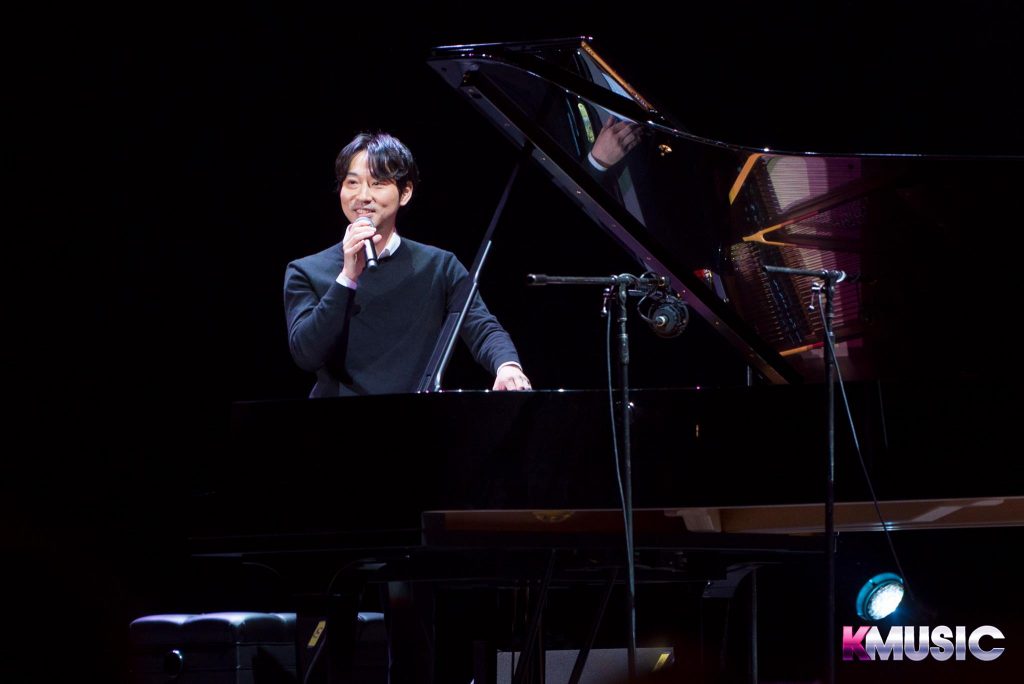 YIRUMA then performed Dance which is one of the newer songs from his latest album which was released in September 2015. Dance is a track inspired by YIRUMA‘s hike through the forests of Jeju Island, YIRUMA stated that whilst he was hiking through the forest he could hear the voices from the trees and plants around him. This prompted him to write this song, as he felt saddened by the government’s attempts of removing trees and the disappearing forests.

Following the Dance, YIRUMA invited an audience member to come on stage to play the piano with them. A lucky fan was invited onto stage, where he and YIRUMA played and improvised a song called Emerald, named after the name of the hotel that the fan was staying at.

Following the interactive fan event, YIRUMA performed Prelude in g minor which is dedicated to his father-in-law who passed away. Then followed by Waltz in e minor. 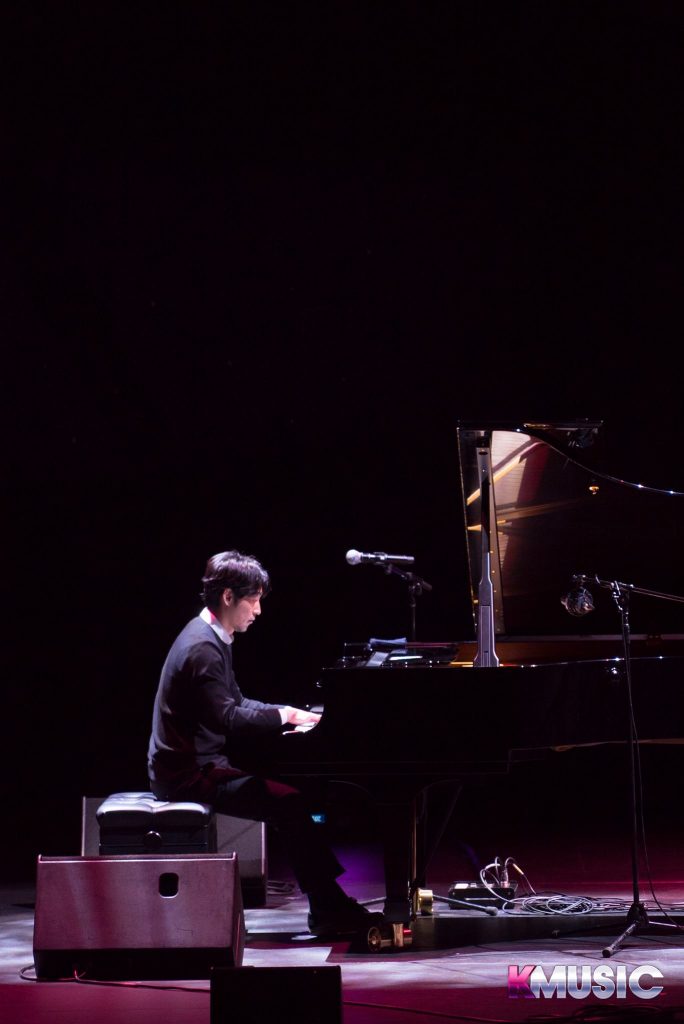 As it was nearing the end of the concert YIRUMA then performed his most well-known piece River Flows In You. At the conclusion of the song the audience cheered and clapped.  YIRUMA then concluded the concert with Reminiscent, which he believed was a ‘nice piece to finish off with as it tied all the ends together’.

However it was not the end of the concert, YIRUMA then came back onto stage for an encore. Where he displayed his masterful skills in improvisation with some jazz standards, which generated much applause and excitement from the crowd.